Passive cooling with the Noctua NH-P1

It was long overdue, but here it is! The NH-P1 is getting through the test to see how much it can handle and how you can use it for your build. This is not a very “big” review for a few reasons I will detail later, but I still enjoyed playing with the cooler a bit to see what it is capable of. Plus the idea of silence is very interesting for me as I like my low noise builds overall.

In case you missed the unboxing, here it is so you can see what the cooler looks like.

Getting the goal of this review

Before anything, I want to clarify a few things here so people don’t get too high hopes. I do not consider this a “full proper review”. Cooler testing is very complicated to get right (at least for me) mostly because there is a huge variable which is the ambient air. This is especially true for passive cooling. Simply put, I do not have a fully controlled environment with an actual lab or even an AC. I can measure ambient temperature, but it changes slightly between each runs, and all those tests were done over the course of two days.

On top of that, those results were done on an open benchtable which is drastically different from a normal computer case.

All this to say, the results here are only valid “in my situation” and you may very well have different results depending your personal situation. Still, the differences should not be too big to invalidate everything here.

That being said, I still find this interesting enough to share and I believe that variance is small enough to work in the majority of scenario.

Obviously I am not the first to test this and I’m sure I won’t be the last, so most people that are interested in this cooler already have some idea of what it can do. My main focus here will be on the gaming experience.

I do expect multi-core workloads to absolutely max out the heat output and make the CPU throttle unless it is very low power or TDP (like a 65w CPU with power limits). But since gaming almost never max out newer CPUs because of the amount of cores it uses, it should be very doable to gaming without active cooling.

I did include some Cinebench R23 multi-core data just for the sake of comparison and to see if the P1 can go above and beyond my expectations.

All tests are done running the latest version of W10 fully up to date. The tests consists of running a Cyberpunk77 benchmark and a CS:GO benchmark entirely as well as a 10mn Cinebench R23 run.

Tests on the 12700K are done without power limits unless specified otherwise. Both Ryzen CPUs are running at the default power setting.

All tests are done with a 15-30mn interval to let the CPU and heatsink cool down properly before loading it again.

*The DDR5 ram ran at JEDEC 6000MHz because it would not POST with XMP/EXPO settings. 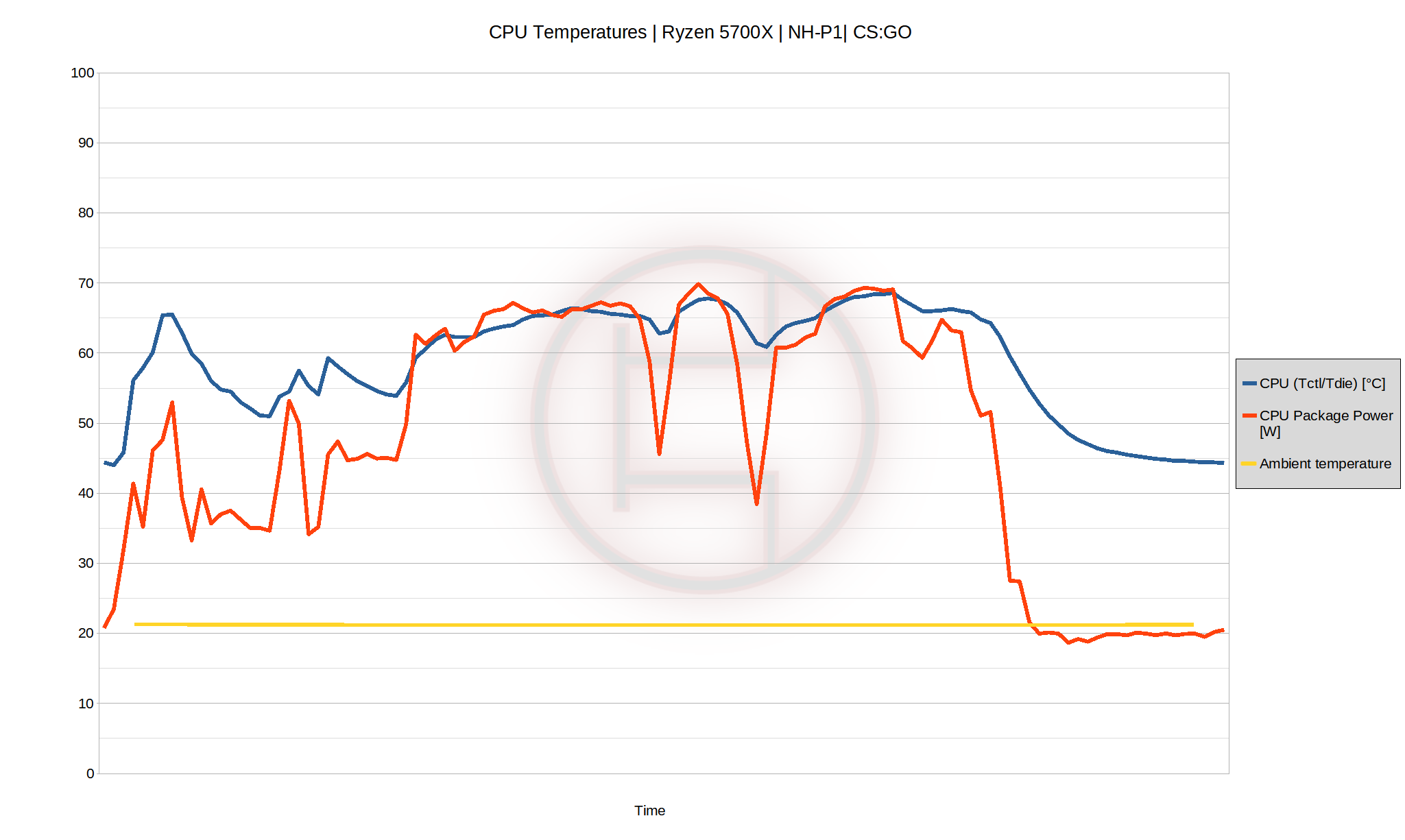 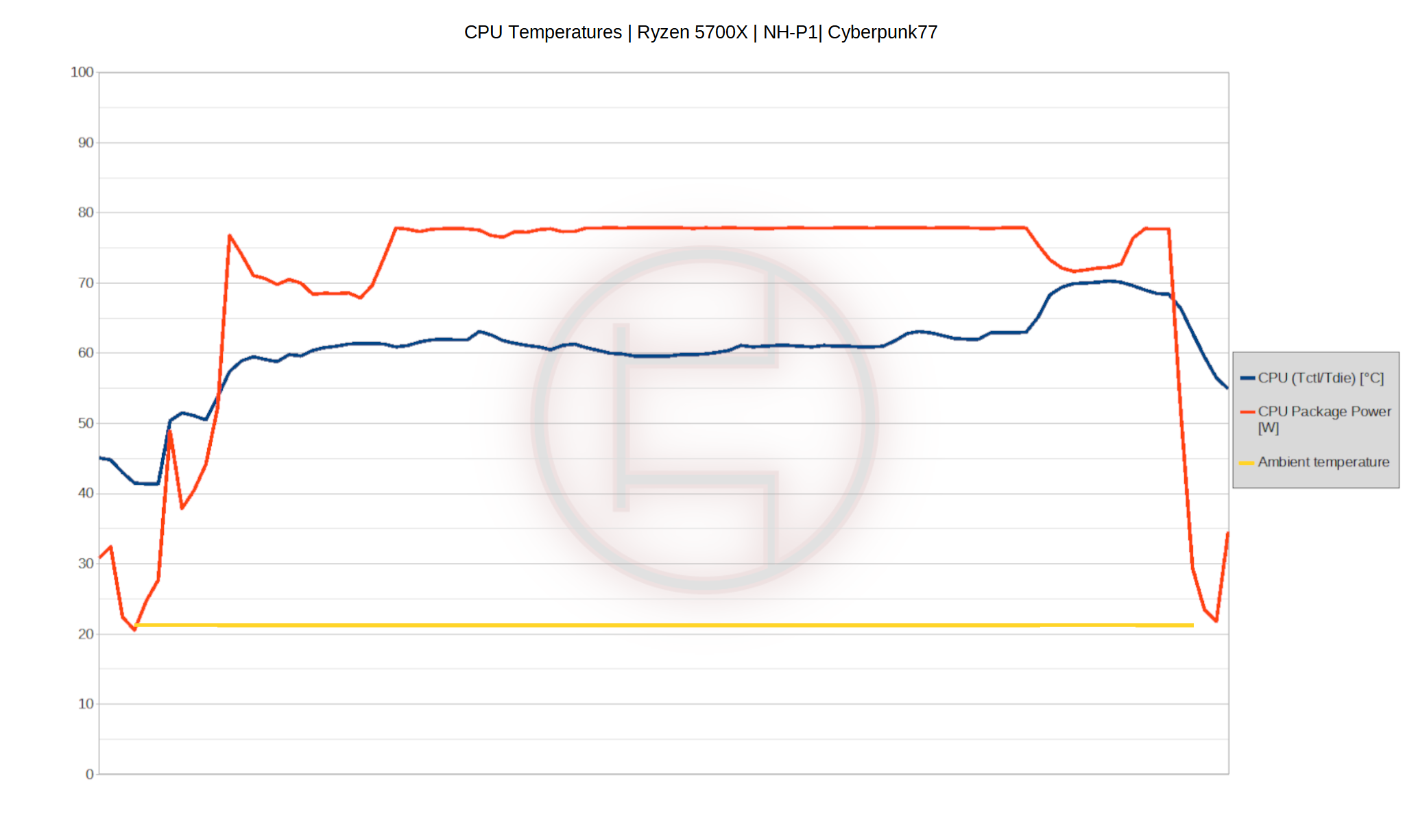 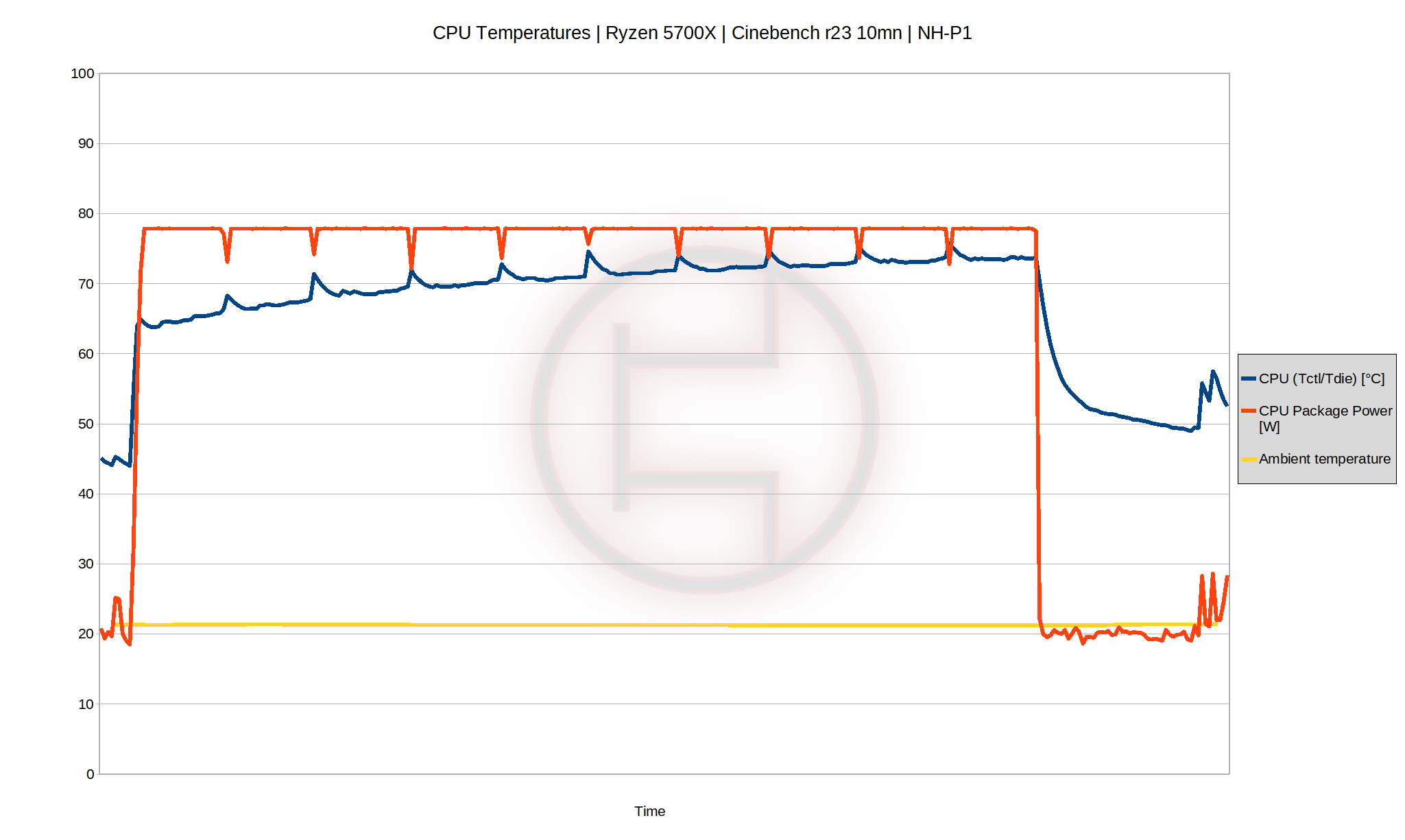 The 5700X is a great example of a CPU that can easily be cooled with the P1. In both CS:GO and Cyberpunk77, we see temperatures below 70c while drawing between 70w and 80w (this makes sense since the PPT of this chip is 76w). The Cyberpunk77 benchmark is rather short so it is hard to to say if the temperatures would be worse while playing for longer, but it stays well below 80c so we have a nice headroom still.

CS:GO however runs for 4-5 minutes. Even then, we can see the power draw being quite inconsistent and dropping quite low, at around 40w for a short period. The CPU temperature follows over a few degrees when this happens which helps it stay pretty cool during the benchmark.

Considering the power draw below 80w, I did expect Cinebench R23 to run without issues, and was not disappointed to find out it did just fine. The temperature quickly goes to around 65c and then slowly builds up to 75c over the 10mn run while power stays constant. I believe it would have been fine running for another 10 minutes before getting to “uncomfortable” temperatures.

Following these results, the NH-P1 should be able to handle most CPUs below 100w in gaming without issues. While the “65w” TDP units should also have plenty of cooling, it will depend the duration of the workload, as the heatsink itself heats up with time until it can no longer dissipate the heat. 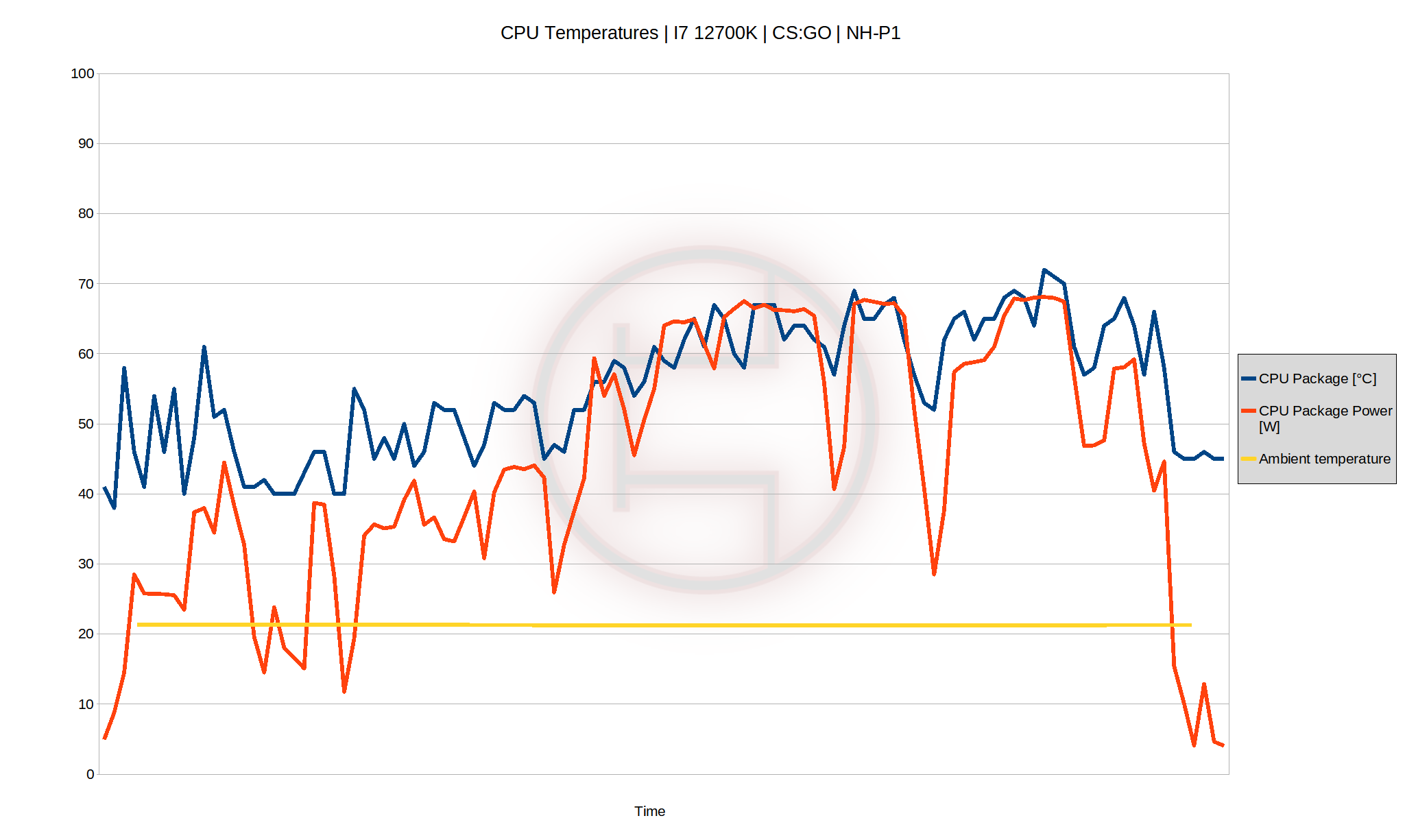 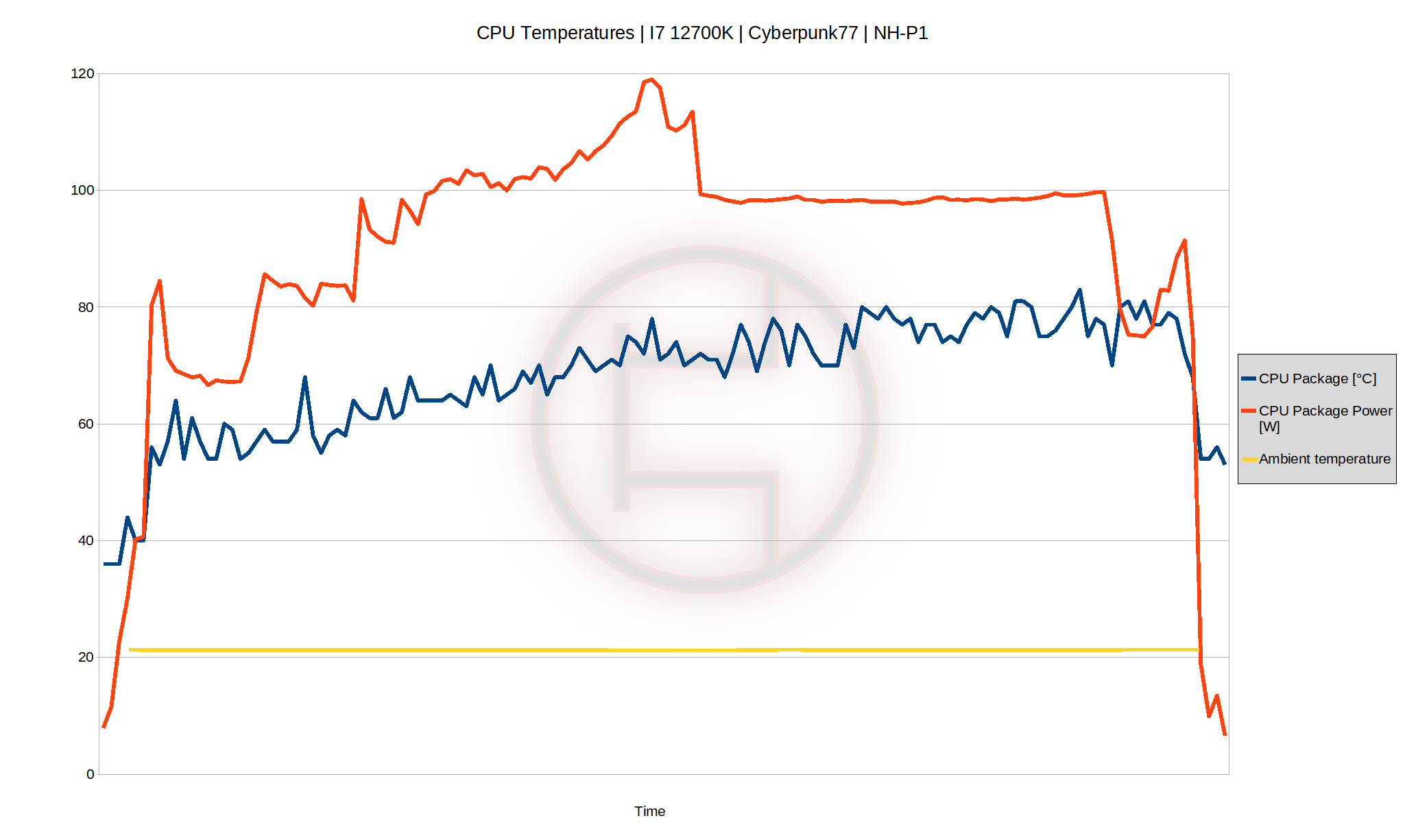 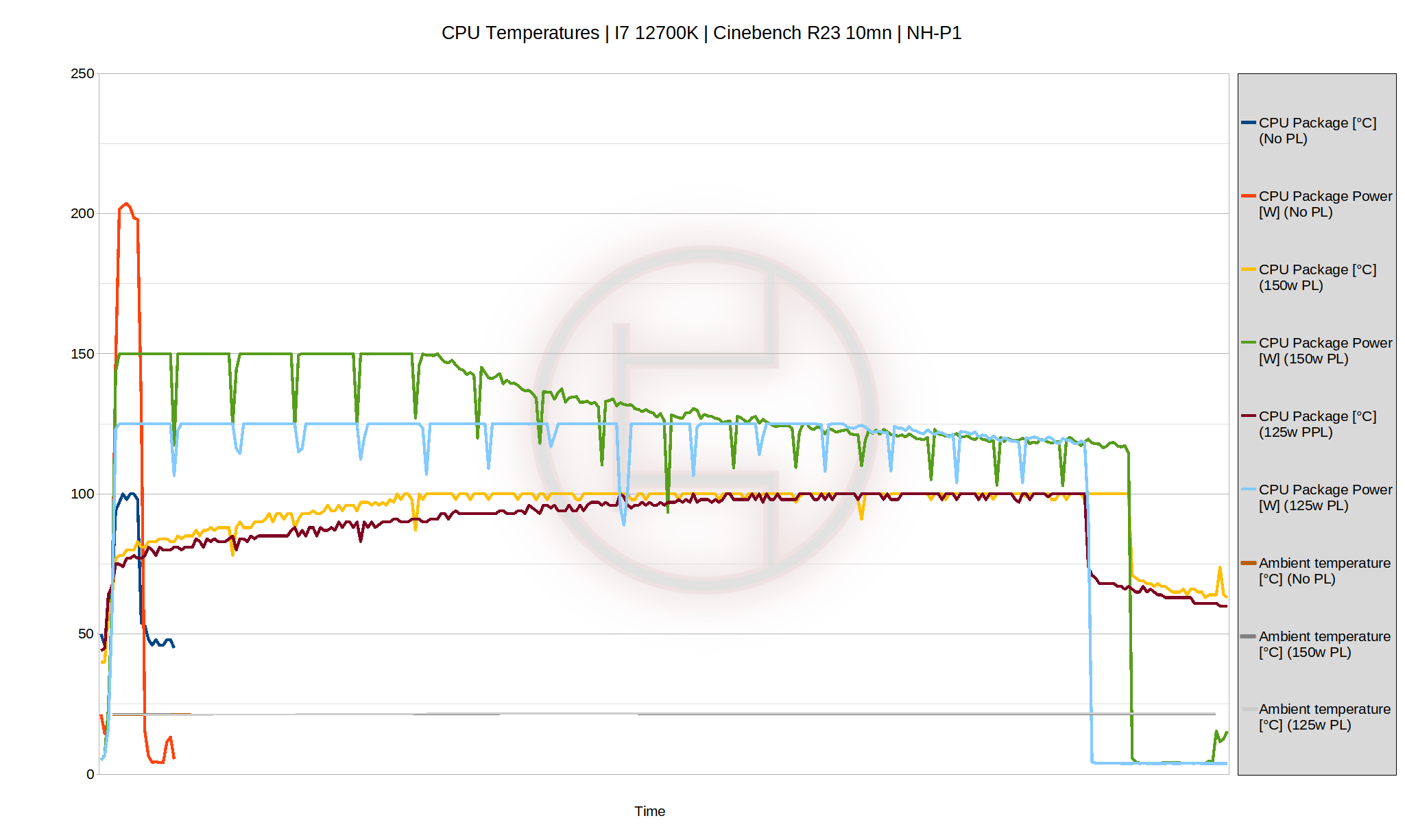 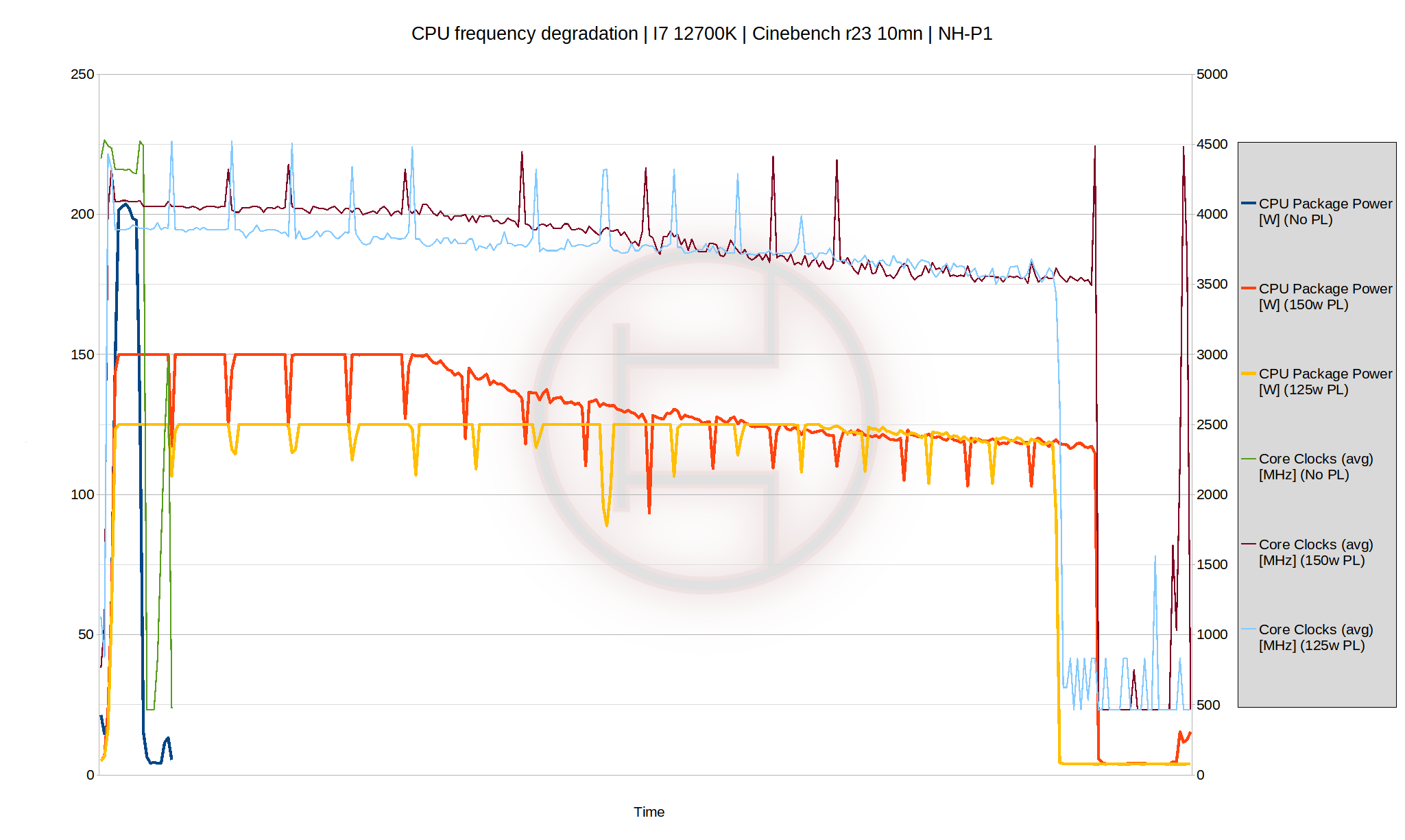 The 12700K gives us some more interesting results. First of all, the thermals in game are still very reasonable even without power limits. This is a perfect example of games not maxing out a CPU, as it will not draw more than 120w in the games here. This makes for well controlled thermals around 70c in CS:GO and 80c in Cyberpunk77. Both are very much fine for this CPU under a passive heatsink.

In Cinebench however… I had to try with the power limits back on. Let’s see what the graph says.

I quickly stopped the run without power limiters at the CPU immediately skyrocketed to 100c and started to throttle immediately while pulling 200w. This is well beyond the limits of the heatsink so it was pretty clear this was too much. I stopped it there and started lowering the PL to 150w in hopes it would work better.

And… it somewhat did. It took a few minutes for the CPU to reach 100c and start dropping power to stay within thermal limit, but we had at least 3 or 4 minutes at full speed. Obviously this means that a sustained 150w load isn’t adequate for this cooler, but it’s an improvement I guess. Short bursty workloads could cut it with enough fresh ambient air around.

I am however disappointed to see 125w PL eventually still fail and throttle after around 7 minutes of benchmark. I didn’t bother testing 100w PL at this point but I believe it would be the limit of a sustained multi-core load for this cooler. Still, gaming is very much possible as games don’t load every part of the CPU at once for a long period of time, so there’s that.

Now, I did include a frequency degradation graph for fun, just to see how it impacts the CPU’s performance. The first thing to notice is that setting a PL has a direct impact on how high the CPU will boost while thermally comfortable. My 12700k went a bit above 4GHz all core at 150w, while it stayed around 3.9GHz while running at 125w. We can see both lines progressively lowering to around 3.5GHz with time as the temperature increases and throttling appears.

The interesting part for me is that despite the 125w PL taking longer to throttle, the clocks don’t stay above the 150w PL for long. In fact, it almost feels like they join just when the 125w line starts dropping, and then follow more or less the same behavior. So running the 12700K at 125w PL doesn’t feel worth it as the 150w PL still has higher clocks before crossing it, potentially giving you an edge in performance for this time.

The 7600X is another interesting candidate because of its aggressive boosting behavior and higher power draw than the 5700X. The 95c “hard limit” will also make for some nice results under Cinebench R23. 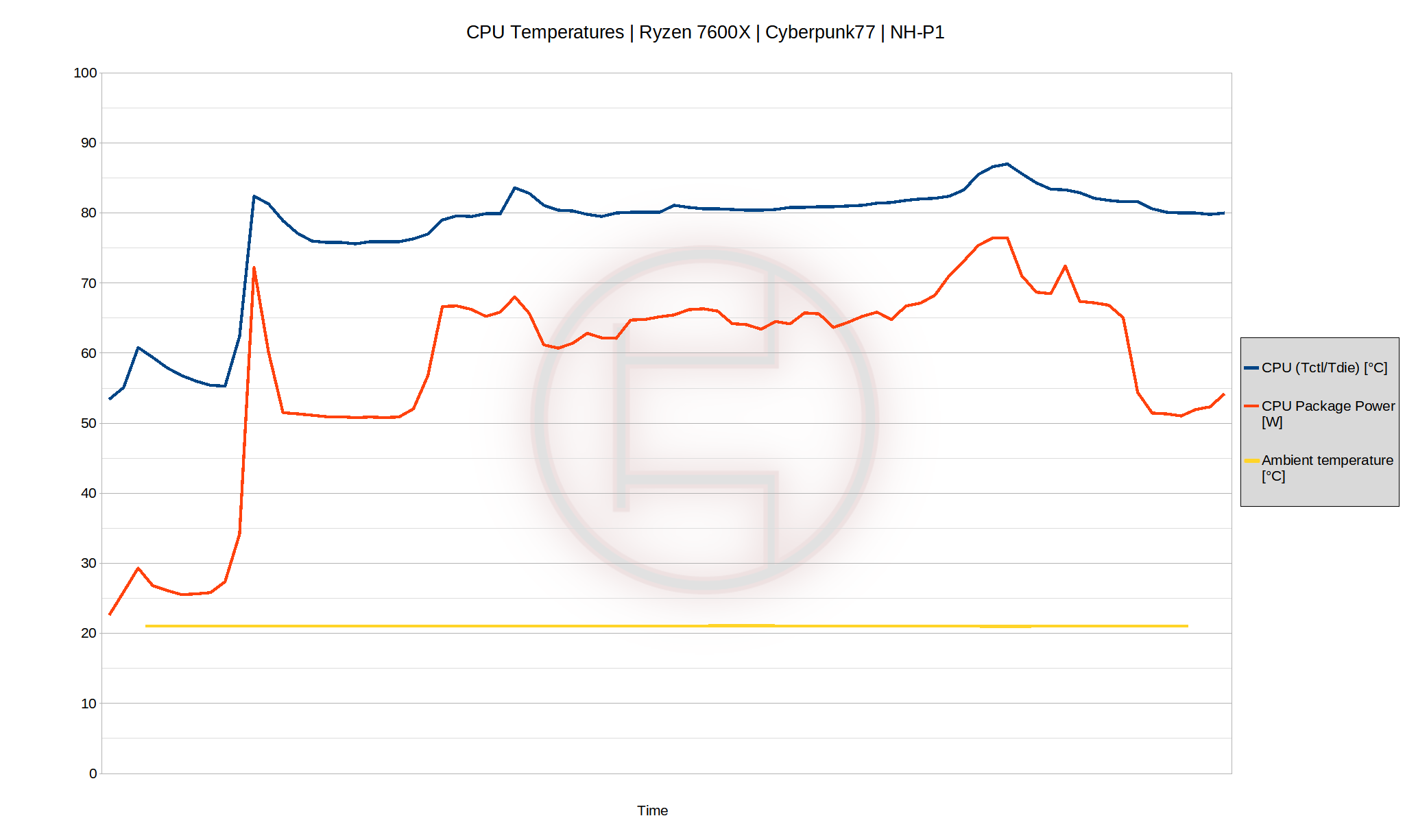 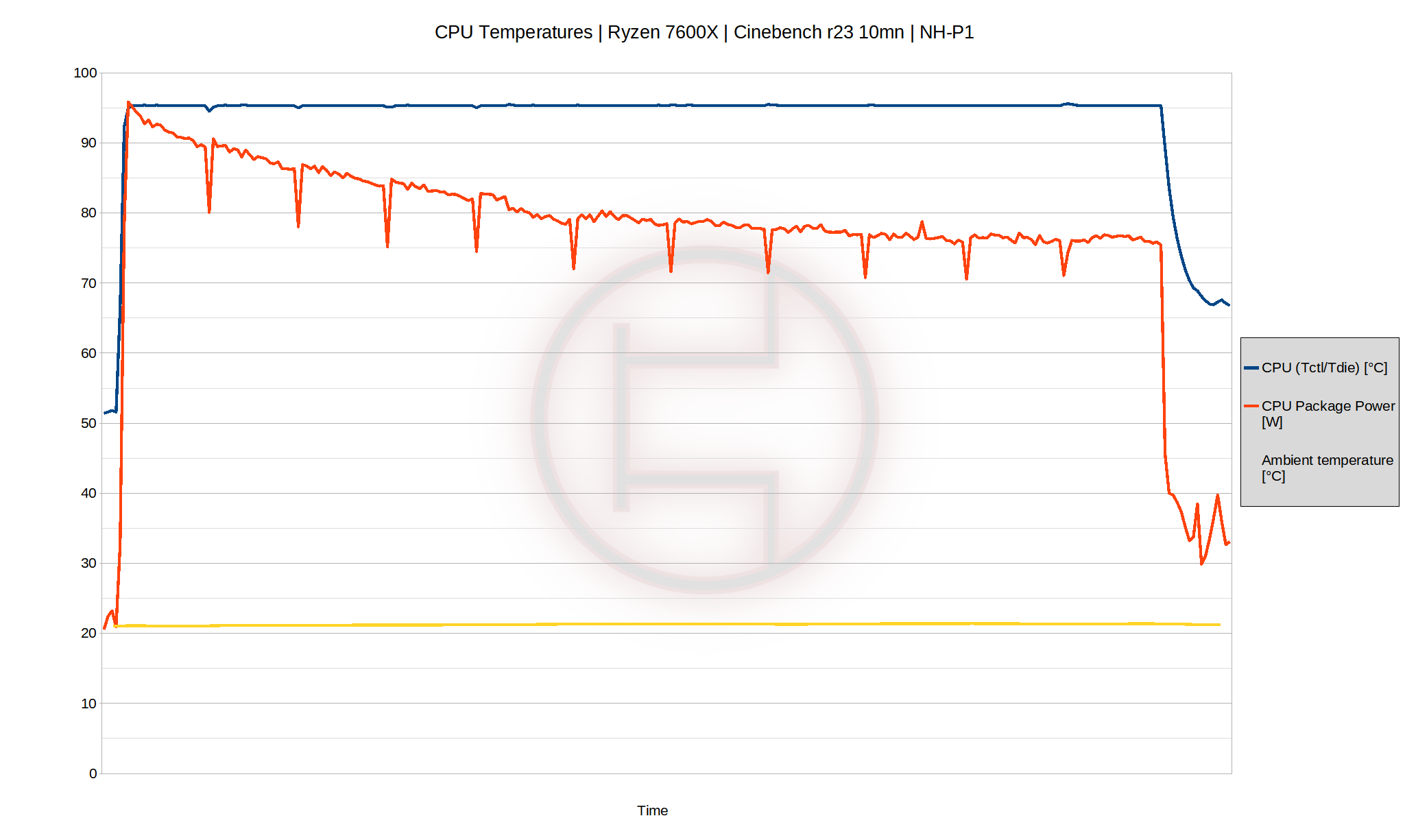 The first surprise I get is how “low” the power draw is under games! Barely 50w under CS:GO and just above 70w in Cyberpunk77 is not high considering how much Ryzen boosts. But, the thermals are not as nice as the 5700X. We are around 65c in CS:GO which is perfectly fine, but we climb all the way to 80c under Cyberpunk77. While still perfectly acceptable, the headroom is thinner with this chip. I still wouldn’t worry much about it for only gaming, but having multiple tasks running in the back may increase temperatures even more.

Thankfully, the Ryzen has a hard temperature limit that you will never go past. Launching Cinebench R23 we can see the CPU peaking at 95c the moment it starts and staying there all the run without moving. Meanwhile, power draw cannot even reach 100w that it already needs to slow down to stay within that 95c limit. It seems to stabilize at around 76w, which is similar to the 5700X’s PPT.

This however confirms another issue : the 7600X, despite having 2 fewer cores than the 5700X, runs hotter at the same wattage than the 5700X from previous generation. It would be very easy to blame the very thick IHS of this generation for this result, but there may be some other results I may have missed here.

Regardless, this means that passive cooling on the 7600X only works for gaming, as multi-core loads will see the performance drop down significantly to the point where the 12700k would easily outperform it.

I was not after performance comparison here, mostly because I knew it would not be good with Cinebench running on a throttling CPU, and that gaming is pretty easy on power draw so as long as it isn’t throttling, the difference is not really noticeable. The main point of this piece is that yes, gaming with the NH-P1 is very much possible and should not cause any issue. Especially with a CPU under 100w power draw.

It is possible to make high core count CPUs work as well if the power limits are properly set. The 5700X is one that works for example. I would expect most Intel Locked CPUs with 65w TDP to run perfectly fine with the P1 as well. A 12700F or even 12900F could be very interesting to try here.

However, there are some pre-requisites that needs to be addressed. First of all, the fin orientation absolutely does matter here as we are relying on hot air naturally rising to the top. If you plan on using this cooler (like I do in the future at some point) you must make sure there is no surface obstructing it above as it would trap air and make for considerably worse thermals.

Second of all, it is less effective under long duration loads. The NH-P1 is effective as long as the fins are colder than the device it is cooling. The longer the load, the more the heatsink will heat up and saturate. With time, cooling will worsen until throttling happens or the load finishes. It also takes longer to cool down after the fact compared to a heatsink with fans.

But this allows for one of the greatest thing in a PC : silence. It is actually very strange to hear nothing at all while the computer is running. Even when there is a GPU running in games, the CPU cooler almost always makes a noise on its own, and I did notice it was “missing” when testing it. I personally really enjoy it myself even if it means reduced power.

This was a fun experiment to conduct and a nice venture into silence focused builds, I may or may not want to do more on that…