A while ago, I was personally made aware by Aris of some potential issues with the new Seasonic Prime Fanless TX700. This is a unit-based off Seasonic’s own “Prime” platform. To make it run without active cooling, they overbuilt the unit, added more heatsinks, and made the housing more open. Even if I’m personally not a huge fan of this idea (no pun intended), there are valid uses for these kinds of units. Today, we’re going to have a look at why the review surprised me.

We see minor differences in most tests… but when we do notice a difference, they are massive. Differences can be seen in minor rail regulation and 3.3v transient response. The rest is down to minor changes in the design or just the sample itself.

Putting aside the performance difference to its competition, our main concern is found in the PSU off to full load transient response testing.

Below a quote and image from the video

My biggest concern is the voltage drops I noticed on all rails during one of the turn-on transient tests. Such high voltage drops can cause issues, mainly during the wake-up phase of a system, where components will ask for high power amounts to resume operation. Due to the vast voltage drops on the PSU’s rails, the stress that will be applied to the DC-DC converters will be high and can lead to several issues, even failures on components like mainboards and graphics cards. 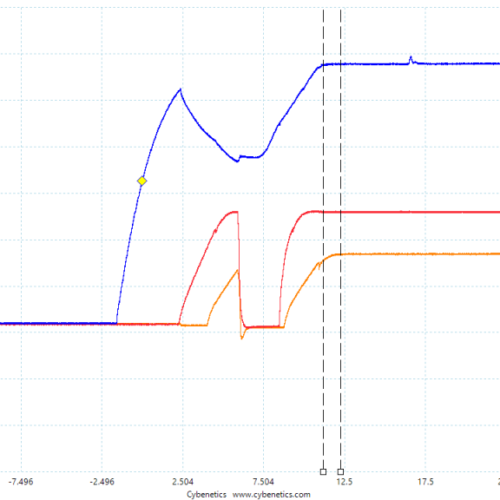 Overall, the TX700 mostly performs as expected. It’s not meant to compete with active cooled units, but regardless of that is outperformed by the competition the company themselves created. My issue with the unit is that the voltage drop during power-on to full load brings additional stress to the VRM of your motherboard and GPU, potentially shortening lifespan. As the unit has a cost of around 270 USD, we expect better. We hope Seasonic can find the cause of this and update the TX700 accordingly and send a sample to Aris validating the fix.