AMD launched the succesful Ryzen 5000 back in november of 2020. The lineup was only limited to 4 SKUs with the 5600x being the cheapest, launching at 300$ usd. AMD never launched anything to compete against Intel’s Core i3 SKUs until very recently.

Finally on april 4th 2022, AMD launched 6 new SKUs including a very cheap 99$ usd Ryzen, which we will review here. Can AMD take on the excellent value i3 12100f from Intel ?

The Ryzen 4100 is a 4 cores and 8 threads CPU based on the Zen 2 Renoir architecture, which is the same architecture as other Ryzen 4000. This makes it essentially a Ryzen 4300G without the integrated Graphics.

This chip is aimed at low budget rigs. AMD is finally trying to bring competition to Intel’s low-end offerings. The included cooler is nice enough if you want to save a buck as well. It is suitable for the 65w TDP of the chip.

The Zen 2 architecture is a bit old however, since it released in 2019 throught the Ryzen 3000. It feels weird to release new CPUs on that architecture when Zen 3 has been in use for over a year now.

We will be comparing the Ryzen 3 4100 against multiple CPUs from both AMD and Intel. All AMD CPUs are on the AM4 socket so the same board will be used for all Ryzens. On intel, we have benchmarks for CPUs on LGA1200 and LGA1700, so two different motherboards will be used.

The system used is Windows 10 21H2 for all platforms. A clean reinstallation is done when changing socket and every driver is reinstalled. Windows is updated everytime before starting the benchmarks. The RTX 3070 FE is on the stock VBios with no overclocks and with Nvidia Driver 512.77 without GeForce Experience. All power limits and boosting duration on Intel are set to the max. XMP is enabled obviously. On the MSI Z690 Tomahawk Wifi DDR4, both EPS cables are plugged in at all time.

We will start with 3 synthetic/productivity benchmarks to see what the 4100 has there. I don’t expect much since it is a low end, 4 cores CPU, and on an old architecture.

Ycruncher is not really a representative benchmark, but it allows us to see the compute power of the cores are. Take this benchmark with a grain of salt, it won’t represent much in real life.

As a note : the 12700K is not present here because of an issue where Ycruncher would only use the E-cores. The results were obviously abysmally low and would not make any sense.

This is probably the only time where the Ryzen 3 4100 does not end up at the very bottom. The only conclusion we can get from this benchmark is that the cores of the 4100, which are using the zen 2 architecture, seem to be slightly better than the cores of the 10400F in single thread. In multi thread, it unsurprisingly goes at the bottom, since it is only 4 cores.

The corona benchmark 1.3 is widely used to measure rendering performance of CPUs.

As expected, the rendering performance of the Ryzen 3 4100 is low. At 230 seconds, it is approximately 27% slower than its next competitor, the 12100F. It gets demolished by any 6+ cores CPUs, but that is not a surprise.

The last non-gaming benchmark is Blender Opendata with the 3 rendering scenes : Scene monster, Junkshop and Classroom.

The story repeats itself here. The ryzen 3 4100 is last once again. The 12100F is 23% faster for the monster scene, and 27% faster for both the Junkshop and the Scene monster scenes. Clearly this is not a CPU we can recommend for rendering. The slow, old, few cores will give you a serious disadvantage.

Shadow of the Tomb Raider

With Red Dead Redemption 2, we are getting GPU bound already even at 1920×1080. This saves the 4100 from being destroyed, even if it stays at the bottom. Oddly enough the 10400F ended up beating all the other CPUs, even by one or two FPS. This is not too worrying considering the RTX 3070 seem to be the limit here, and the difference with the 12700k or the 11500 is so small i doubt anyone will notice it.

CS:GO is still a very popular FPS game, and remains very CPU dependent. Even if all results are still high for all CPUs.

Our last game, Horizon – Zero Dawn, tells the same story over and over. The 4100 is forever all the way down the graphs, crippled by the older zen 2 cores. The 12100F marks another easy win.

I used HWinfo64 to report CPU temperature both under gaming and Ycruncher. This allows us to see how much we can push and also what is a realistic temperature you would encounter when using this chip for gaming. I also decided to see if the stock cooler included with the CPU was able to do the job. Do note however because i had previously used the stock cooler for something else, i replaced the stock thermal paste with Noctua NT-H2 instead.

The Ryzen 3 4100 is unsurprisingly cool considering its low power and low core count. With the Arctic Liquid Freezer 2, it barely reaches 55c under Ycruncher. Even with the stock cooler, it barely breaks the 80c mark. I am actually happy to see that the stock cooler can handle the chip completely in good airflow conditions.

In gaming, the temperatures still sit quite low. Obviously the Liquid Freezer 2 is overkill for this chip so all temperatures are really low, but even with the stock cooler, we never break 70c. And the fan rpm was not really high either. The CPU fan in CS:GO peaked at 1340 rpm and 1549 rpm in Horizon Zero Dawn. It is still very reasonable and the fans of the RTX 3070 and the power supply were louder in the end anyway.

We measured CPU power draw with the ElmorsLab PMD device, which measures the power going through the cable directly. This allows us to see only the power draw of the CPU and not of the whole system. This is only CPU power draw, and before VRM efficiency losses. The PMD measures 8 samples per second.

In Y-cruncher, the CPU peaks at around 56-57w. The stress test ran for approximately 30 minutes. We can clearly see the different cycles of each Y-cruncher passes. The crazy spikes at the beginning and the end are actually bugs from the PMD as those spike all the way above 2400w. Since this is impossible, those can be disregarded.

In Shadow of the Tomb Raider, power draw is much less consistent. It is expected in gaming, as it is not linear planned instructions like synthetic loads. Still, the CPU barely reaches 50w. The logging is exactly 4 minutes and 20 seconds long, and the last part is back on the desktop with the game closed. Just like for Y-cruncher, the spikes going off-screen are bugged at over 2400w.

It is not hard to power the 4100, which is expected from a low power ryzen 3. Even with massive cooling, the CPU does not reach 60w under load. AMD lists this CPU as a 65w TDP part and for once, even if the TDP does not represent the power draw, you can use that number to calculate the wattage for a power supply since real power draw will be below that number, especially in games.

This was our first CPU review at cultists. The first thing we must mention is obviously that we need to improve and polish test methodology and testing.

The 4100 was a good first training because i expected the CPU to be underwhelming anyway since its on an old architecture and the specs on paper just don’t look good. So here we are.

The Ryzen 3 4100 is not a good chip. I think the performance charts show that clearly enough. It’s dead last in every game, and by a lot. An Intel Core i3 12100F surpasses it by almost 30% while having an MSRP only 6$ higher.

On top of this, the older architecture, the slower cores, the dead platform, and the lack of IGPU put the 4100 in a really bad place. There is no reason for anyone to get this chip.

There is no upgrade path aside from ryzen 5000 CPUs which are already out for over a year and a 12100F performs better everywhere with much newer, faster cores. Even the price doesn’t feel that cheap considering the 12100F is just a few dollars more.

The only saving grace of this chip are that you can find decent B550 or even A520 for cheaper than current H610 or B660 motherboards for Intel.

We cannot recommend this chip, as the competition is simply better. 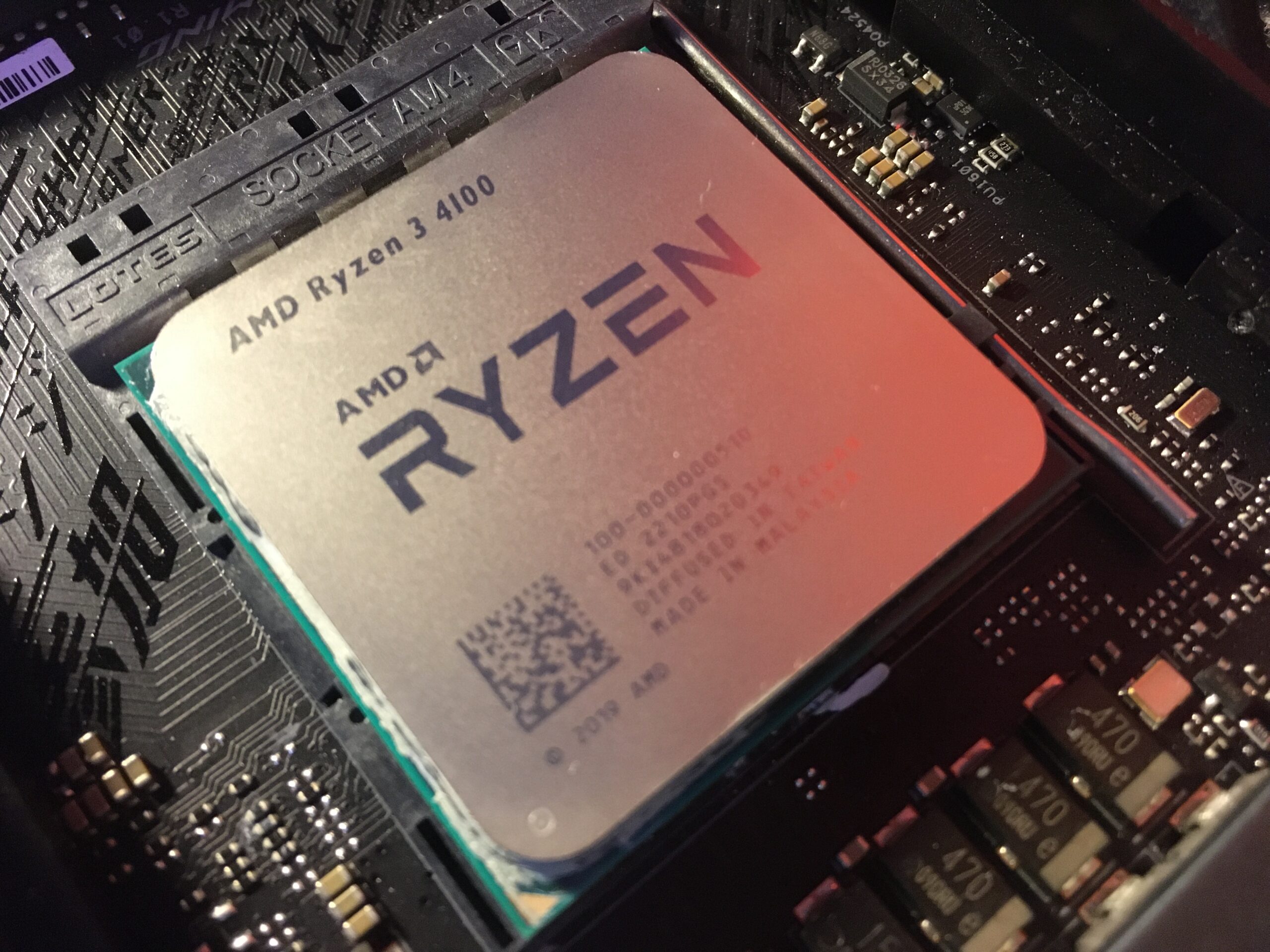