To save our mother Earth from any alien attack
From vicious giant insects who have once again come back
We’ll unleash all our forces, we won’t cut them any slack
The EDF deploys!

The year is 2025, Humanity is living peacefully after standing victorious against the alien Ravagers. Until the 8th of June, giant mutant insects started emerging from underground and waged war on mankind. They are the old enemies again, the Ravagers; hiding, multiplying and lastly waiting. Having learned from the last time, they are stronger and better prepared this time to take over Earth.

Its again upon the Earth Defense Force (EDF) especially the Storm Troopers to banish this new threat and save the day.

A Wing Diver is an air-based mid-range unit with high agility and jetpacks that can fly briefly, but lacks physical strength. 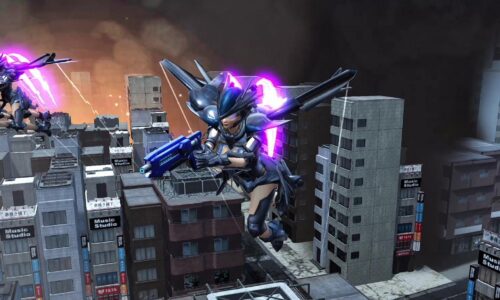 In comparison to the other characters, Wing Divers are not as strong as the others, and can easily be killed if not acted quickly. Wing Divers can carry a maximum of 2 weapons. 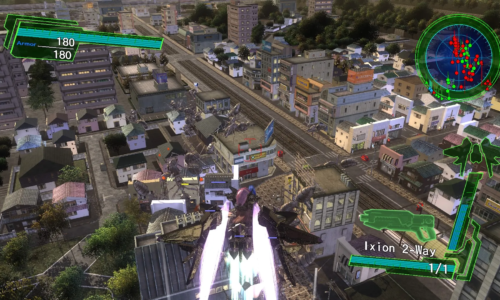 It is a good choice for players who enjoy fast-paced action games.

A Fencer is a heavily armored ground unit able to carry a maximum of 4 weapons, including a shield that can push enemies back. As the strongest agent of the four, it can deal massive damage all by itself. 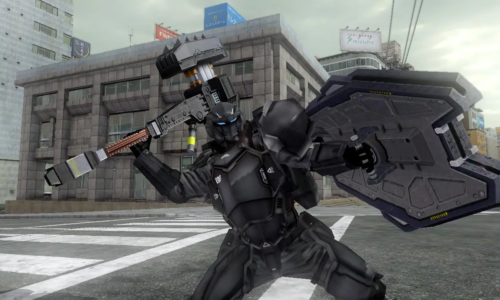 This heavy armor and weaponry, however, comes at the expense of speed. In addition to their slow movement speed(though you get a jetpack for jumping), few of the fencer weapons also require a short activation time. Lastly Fencer’s weapons are the only ones in the game that has recoil. 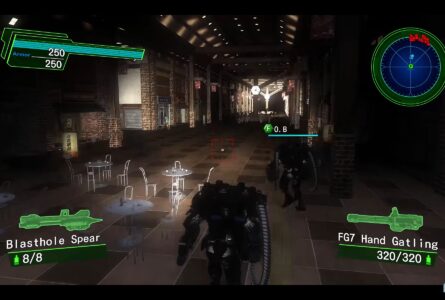 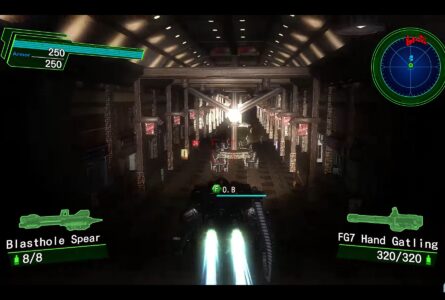 Players who like hardcore action are best suited for this agent. 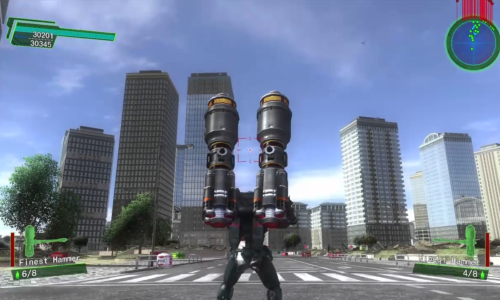 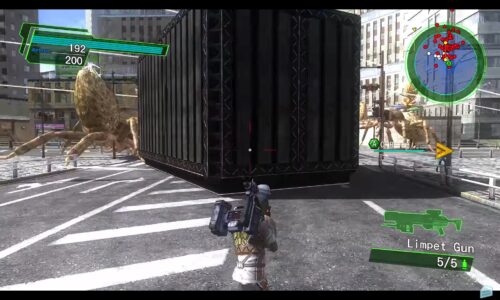 Playing as an Air Raider requires strategizing the battle, good resource management and assurance for longest survival. Hence this is by far the toughest agent to play with. 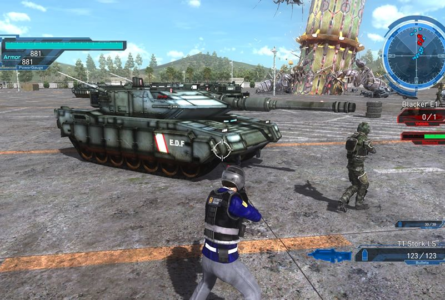 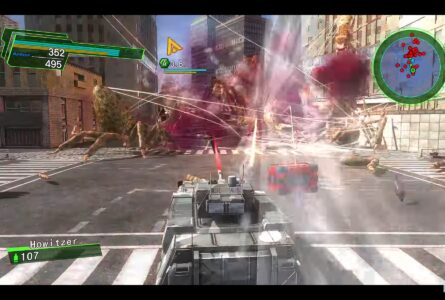 If you’re into Dota, League of Legends, or War Hammer, you’ll want to check out this agent. 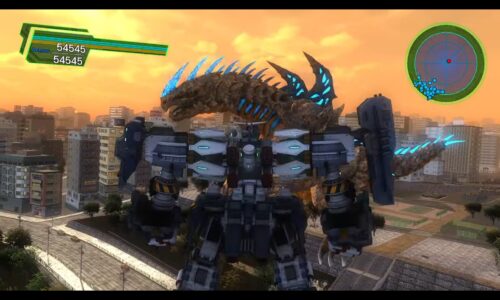 Ranger is a foot soldier agent and has the most balanced stats in the game. Compared to an Air Raider, the Ranger has a bit more strength and has about the same speed. Rangers can carry a maximum of 2 weapons. 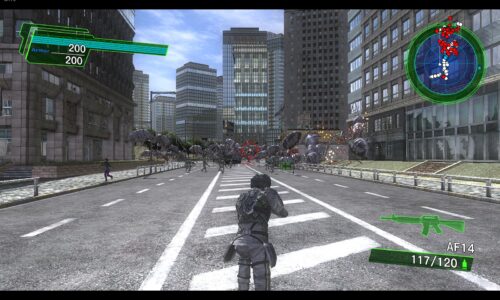 All players, regardless of their experience level, play well with Rangers. 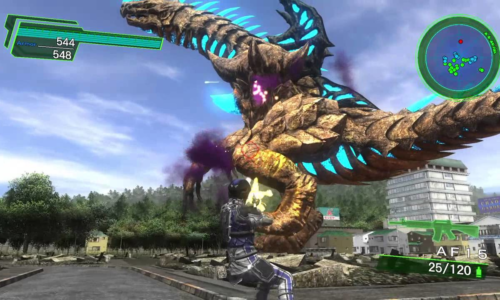 Click to Expand
The objectives in EDF are simple, survive and kill the evil colossal insects until the last wave. You must choose your agent and weapons before beginning a mission, so careful selection is necessary since types, number of waves, and number of insects in a wave increase with each new mission. 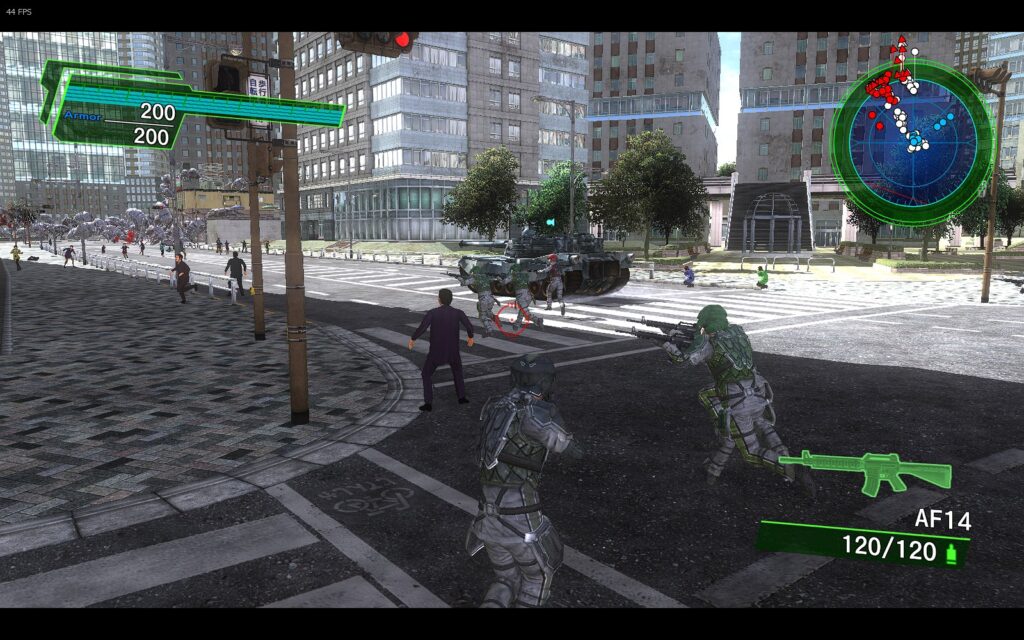 Players will face faster and stronger insects of the same species differentiated by colour on harder difficulties. Players can injure or even kill their allies at higher difficulties if not careful. 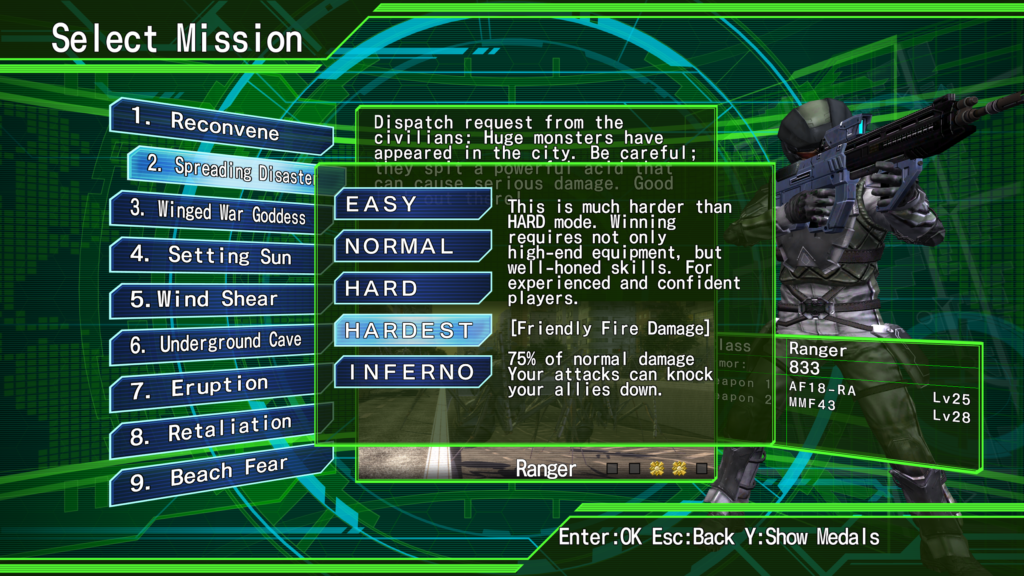 Having them is extremely helpful in a mission; without them, you will be attacked by the entire wave of insects present on the map, which is a death sentence.

One good thing is that players are provided with infinite ammos and killing an enemy often drops healing crates or weapon crates that contain new weapons. Completing missions on harder difficulties assures stronger and better weapons for your agents.

Each mission is played on a fairly large map with many destructible buildings. With such a large map, you have an easier time avoiding enemies when surrounded by them and attacking from better angles. 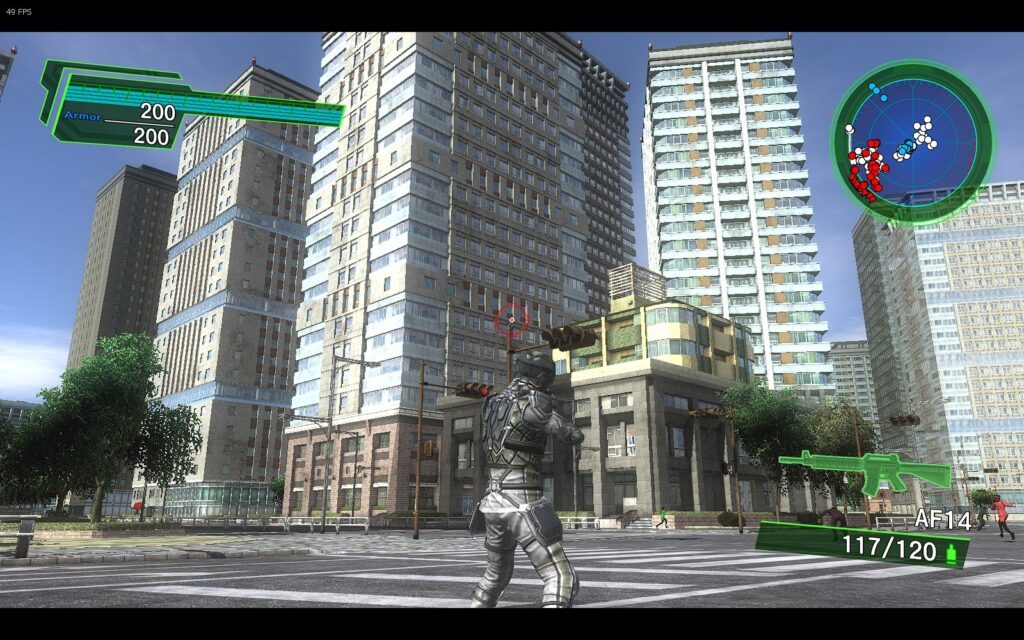 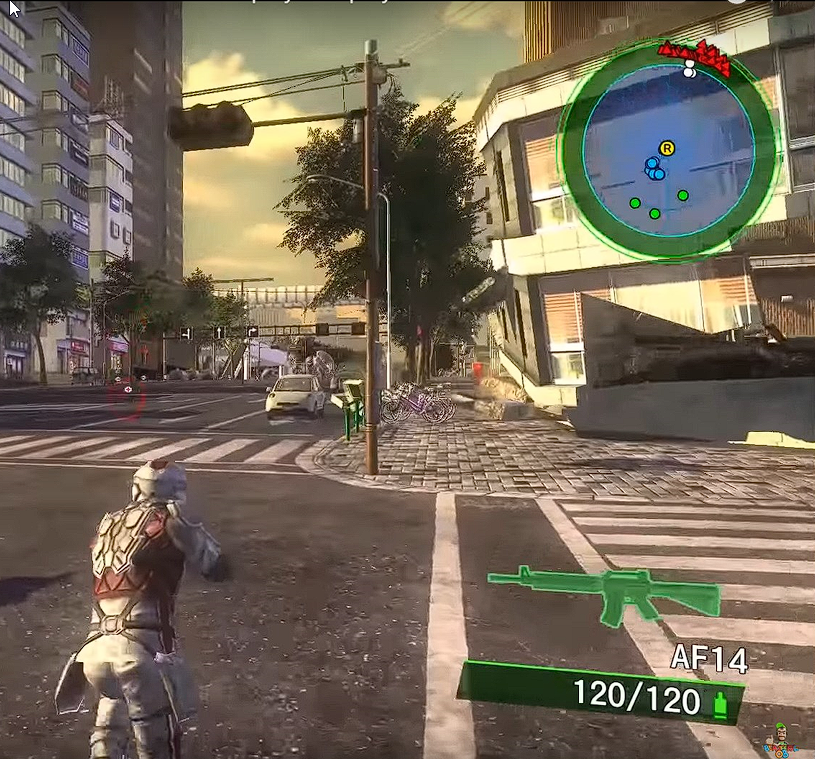 EDF lacks logic when it comes to its world design but none the less these forces players to think and strategize instead blind shooting. More freedom in map area allows the player to solo carry the mission when their allies (NPC or multiplayer) are dead.

EDF 4.1 allows up to 4 friends to enjoy the game together each assuming the role of one of the four agents. Players can join a public or create their own custom room to play multiplayer. 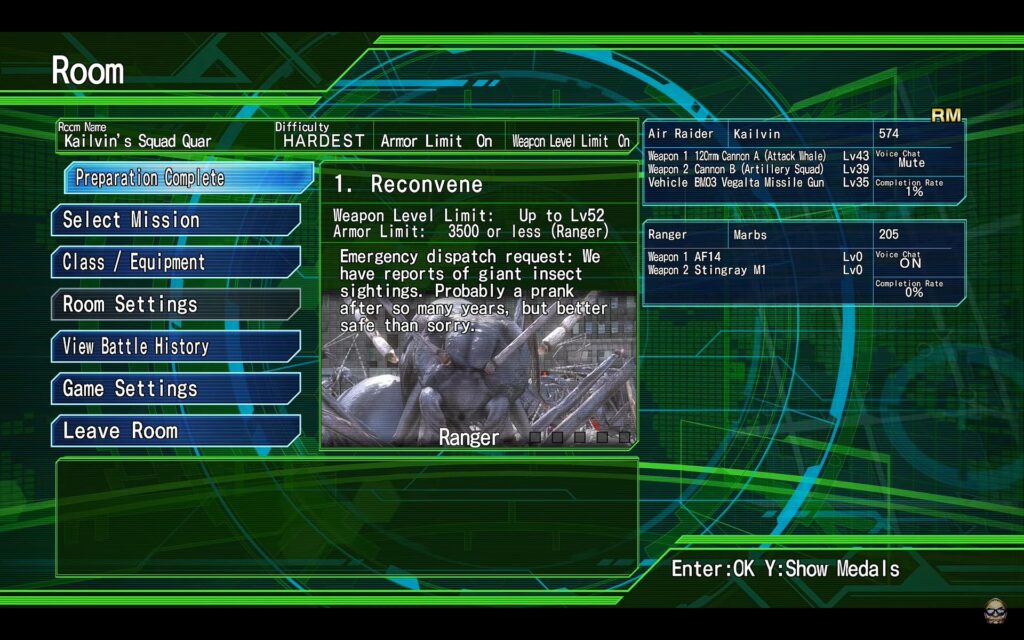 EDF’s User Interface (UI) is quite annoying, it takes at least 7 to 8 clicks to get to the game from the welcome screen.
Controls are kind of bizarre too when navigating through the menus.

Navigating with WASD and the arrow keys isn’t always possible, and in deeper sub-menus, arrow keys aren’t available for scrolling. Rather, multiplayer options or in-game chat options are triggered.

Surprisingly, moving mouse up and down scrolls through the menus everywhere in the game.

EDF keeps it really simple when it comes to graphics. They are neither realistic nor modern but rather are cartoony and old. Characters and environment have very little detail in them, most of the game assets have a 2D look to them except the agent and weapon models. Shadows and light effects are very subtle too. EDF 4.1 despite being a game from 2016 graphically looks like Just Cause from 2006. 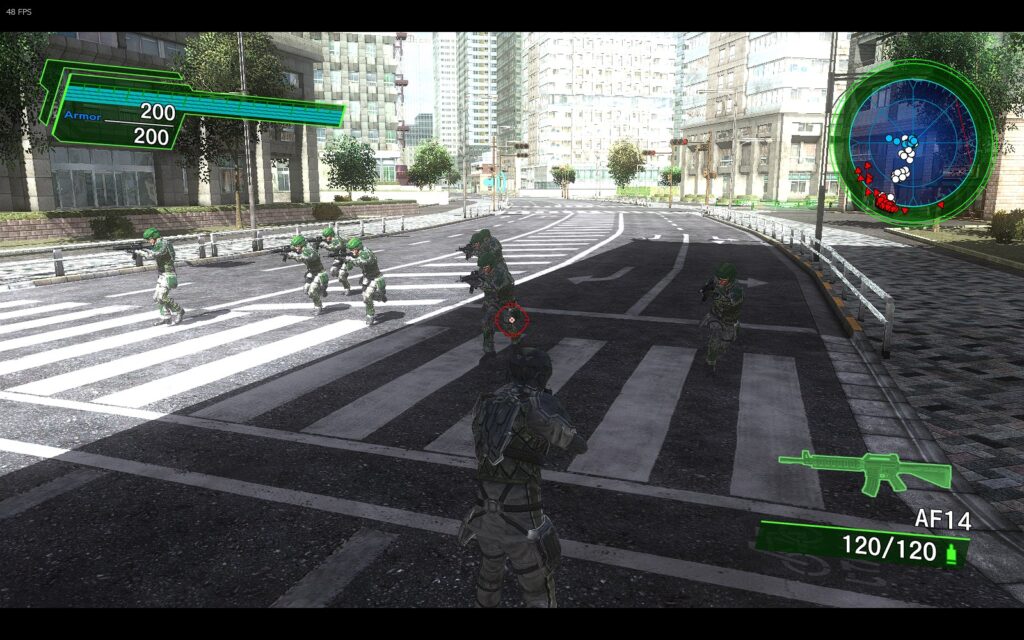 Having said that, EDF’s visuals are really something to behold when you’re blasting your way through hordes of ants. Chaotic moments look really nice because of the cartoony colours amidst the brightened fires and chaos all around. 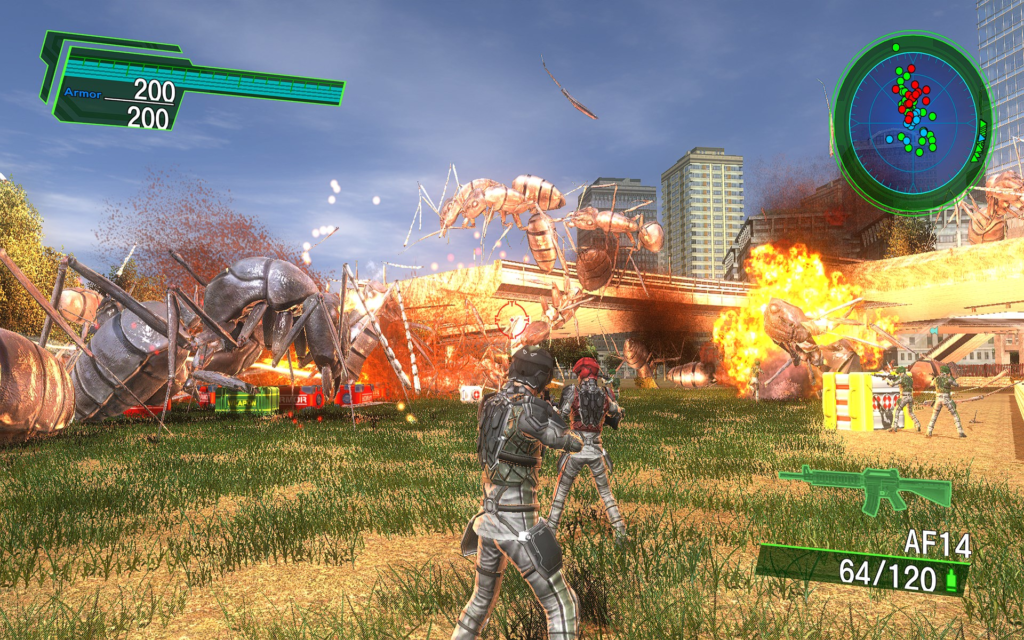 EDF would have been a very GPU intensive game if the graphics were any better than this considering the amount of stuff that happens on the scene. 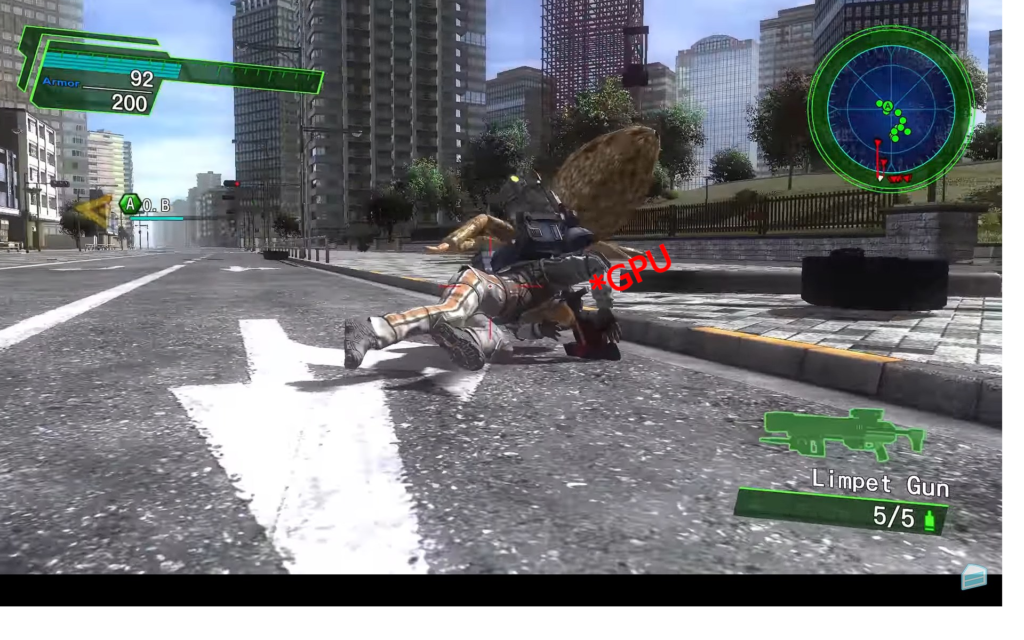 Mostly, one will hear the blast/explosion and gun sounds in the game which are pretty much the same for a specific class of weapon. Sound samples are often reused with slight change in intensity.

NPC dialogues are also quite limited and can be memorized all of it within an hour or so, some of the common dialogues are “EDF!EDF!EDF!” or “What took you so long ?” or “What should be do ?”

For the players, the game has many pre-scripted dialogue options which they can use in the game. Most of them are for encouraging the team and their robotic tone do make you feel like an NPC.

The best thing about EDF 4.1 is its gameplay mechanics especially when all the four agents are together on the battlefield. Each agent has its own unique fight style and advantages over others that are deadly against the right opponent. It is much more enjoyable when you work in a team, as you would normally be running around like a lunatic all over the map when you are the last one standing against a horde of insects. 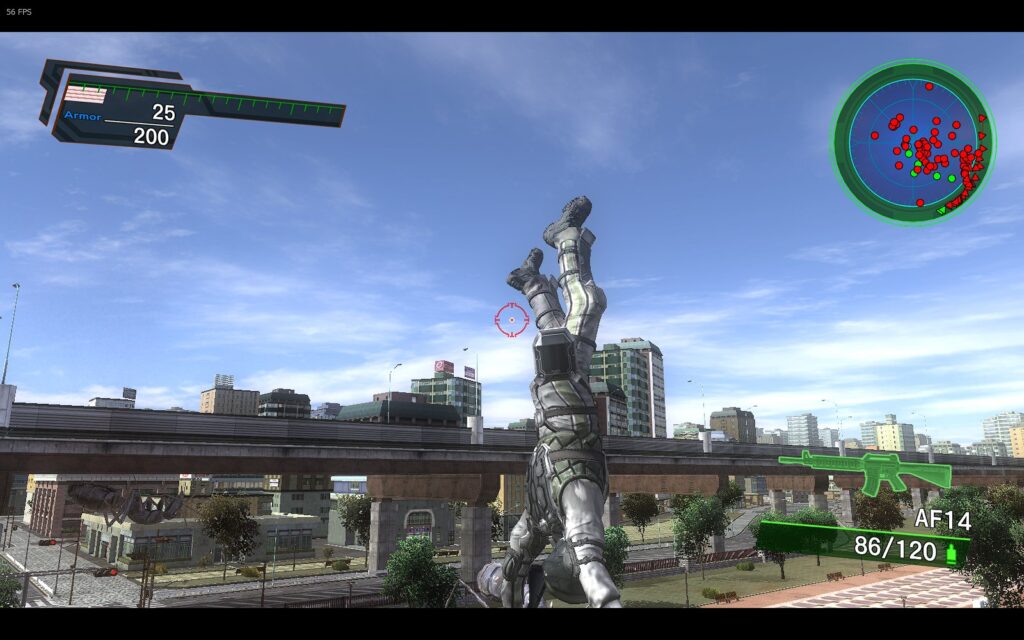 Apart from that, all other aspects of the game are very dated. On harder difficulties, players without high level weapons will most likely run into a dead end due to the overwhelming amount of enemies on the map.

EDF 4.1 is really enjoyable when played in multiplayer but sadly you will hardly find a public server alive in 2022. So, the only way to enjoy the game is to host a private room and convince some friends to play the game.

So for the gameplay alone Earth Defense Force 4.1 receives a solid 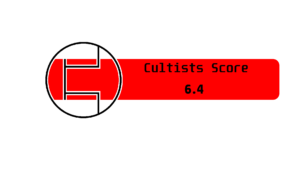 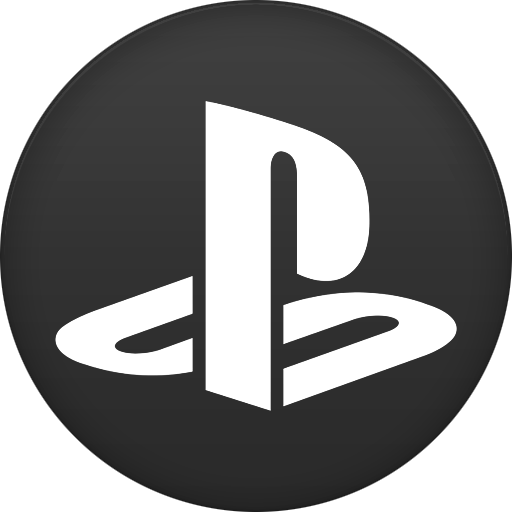