I don’t think I have been this excited about a motherboard before. From the moment I saw the leaked colorful PCB of this motherboard I have been drooling over it. After all this time we finally get a motherboard that doesn’t look like a bunch of funeral transformers with accidental red lines and RGB everywhere. Here the Graffiti-themed aesthetics of the Livemixer break completely from the pack with vivid colors all over, and I love it. 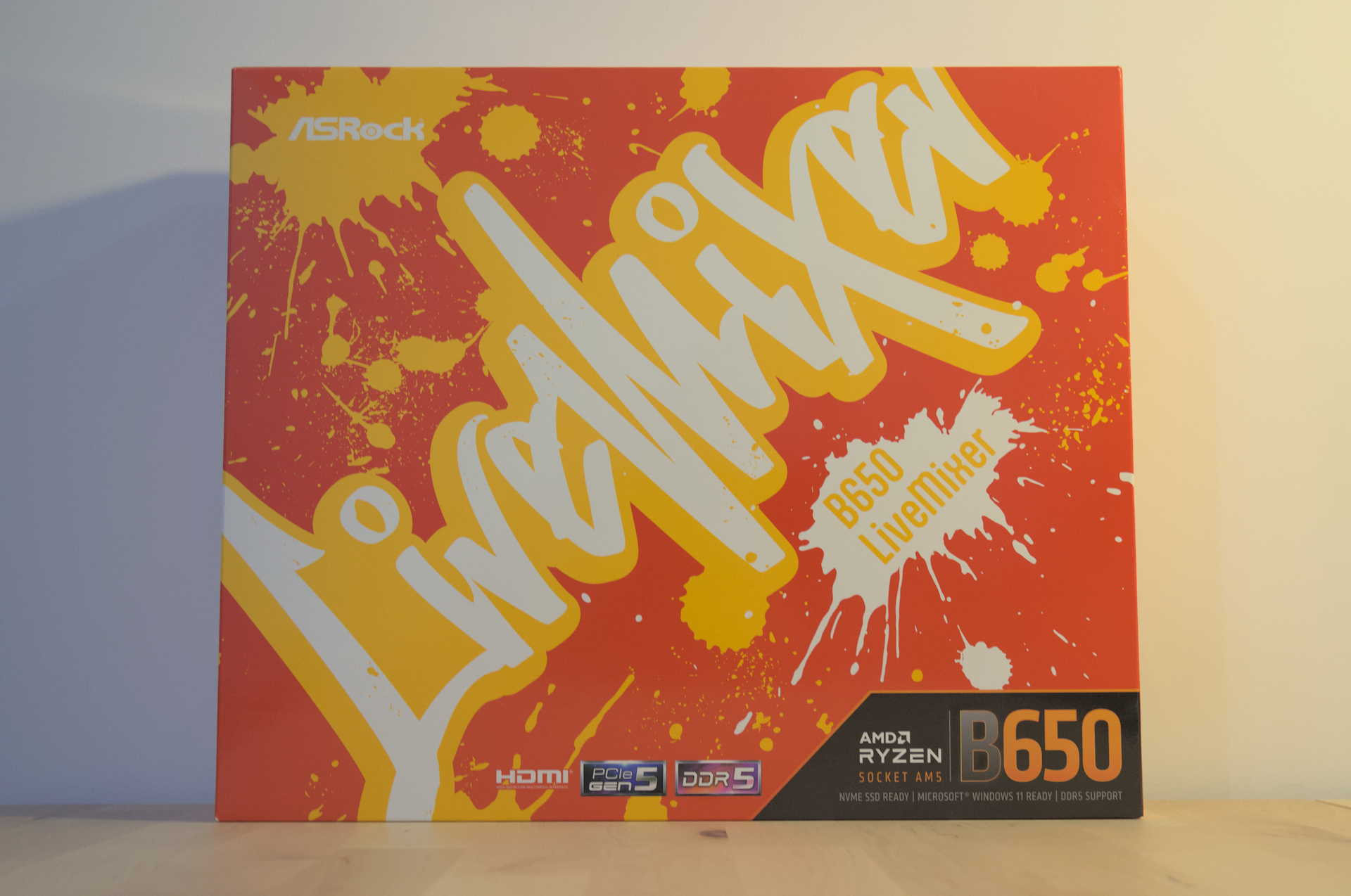 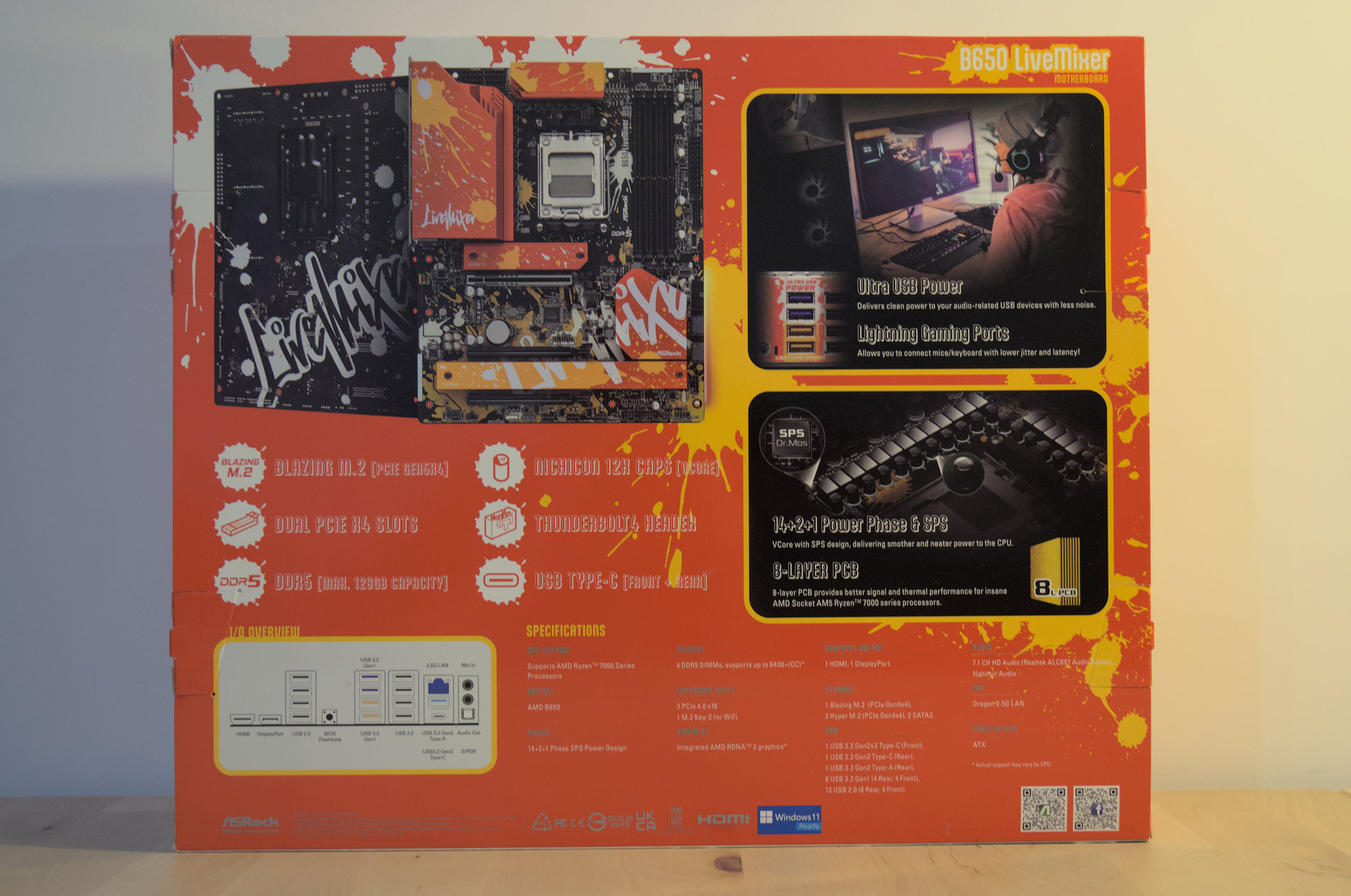 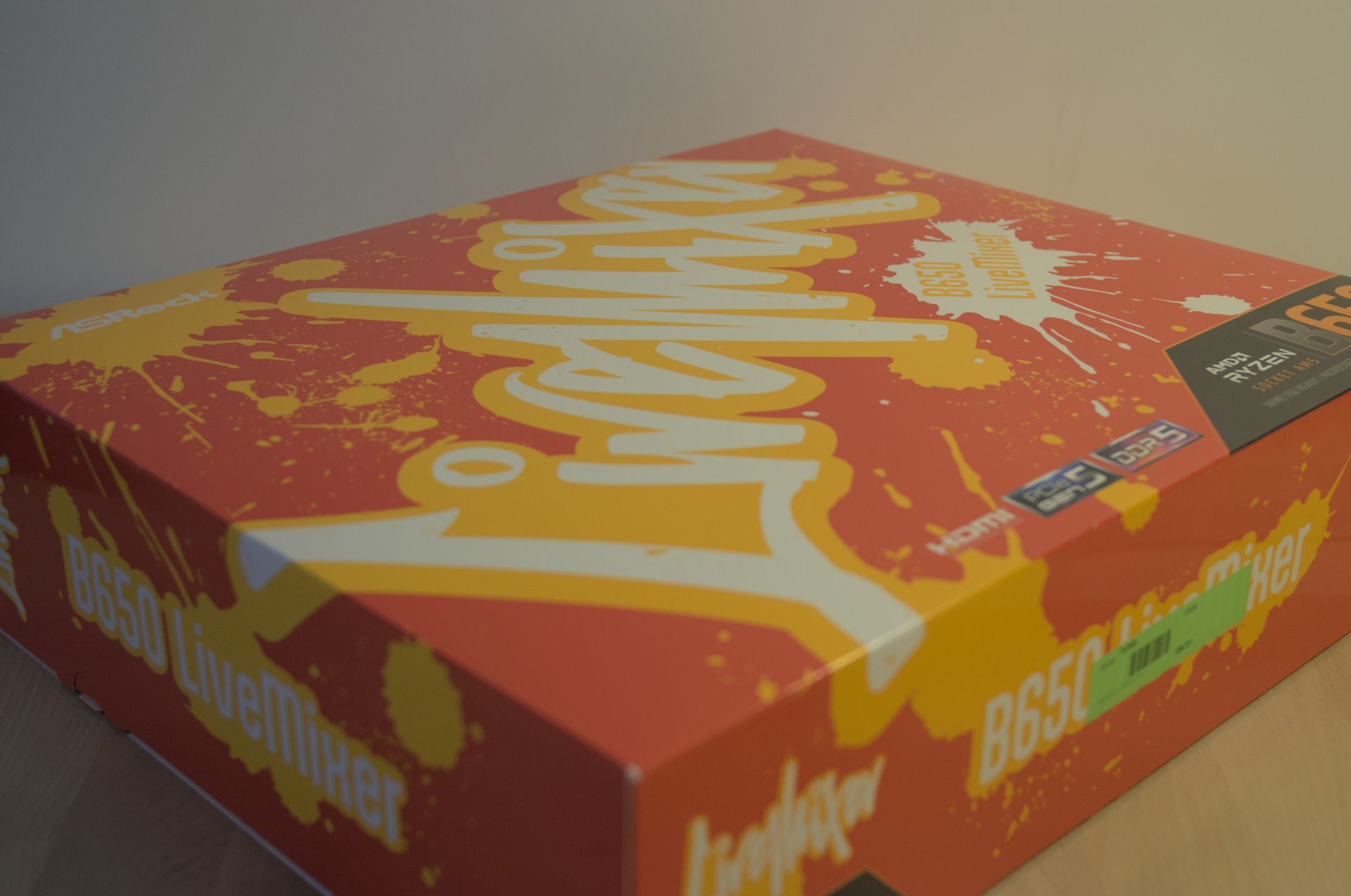 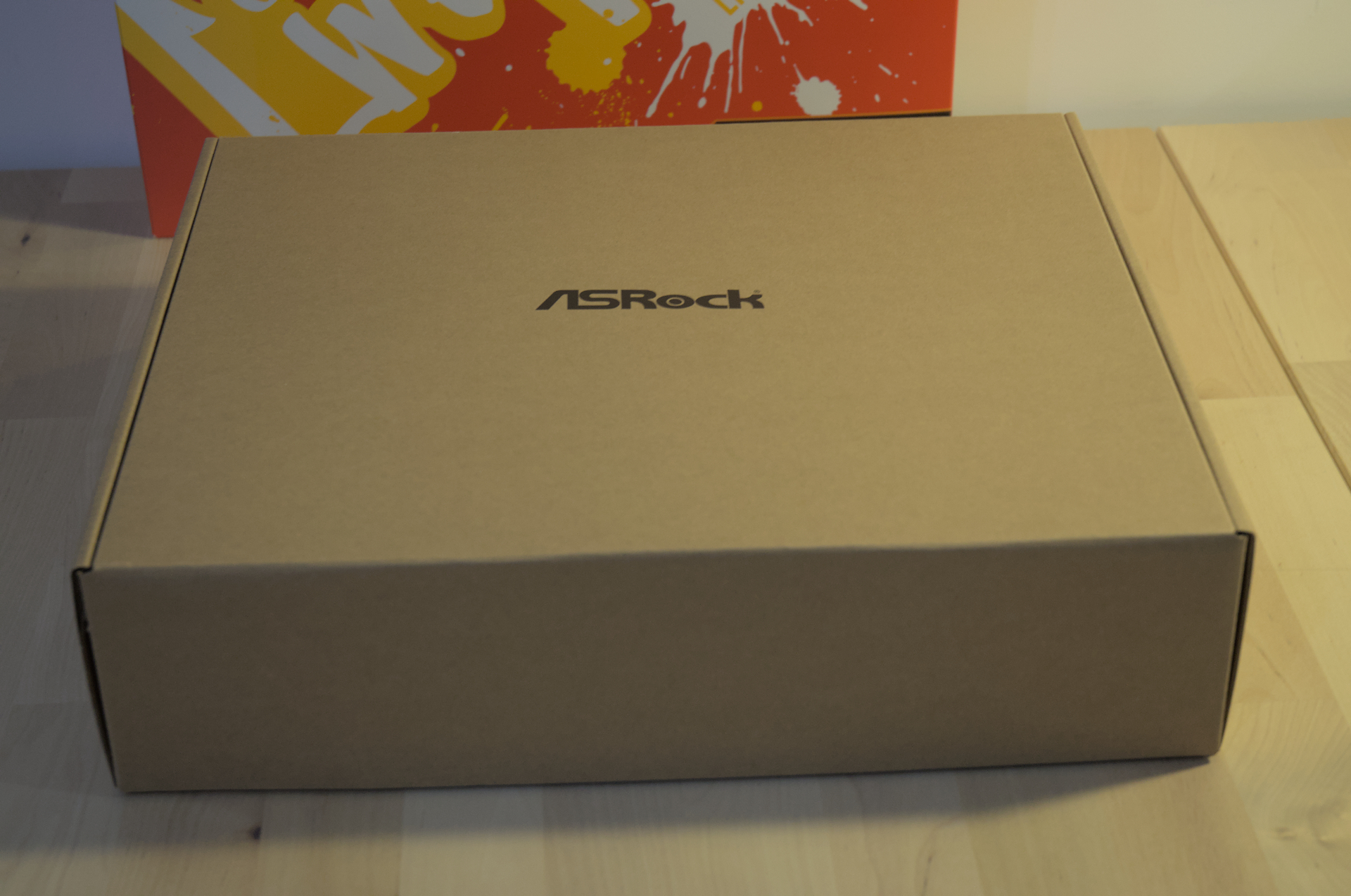 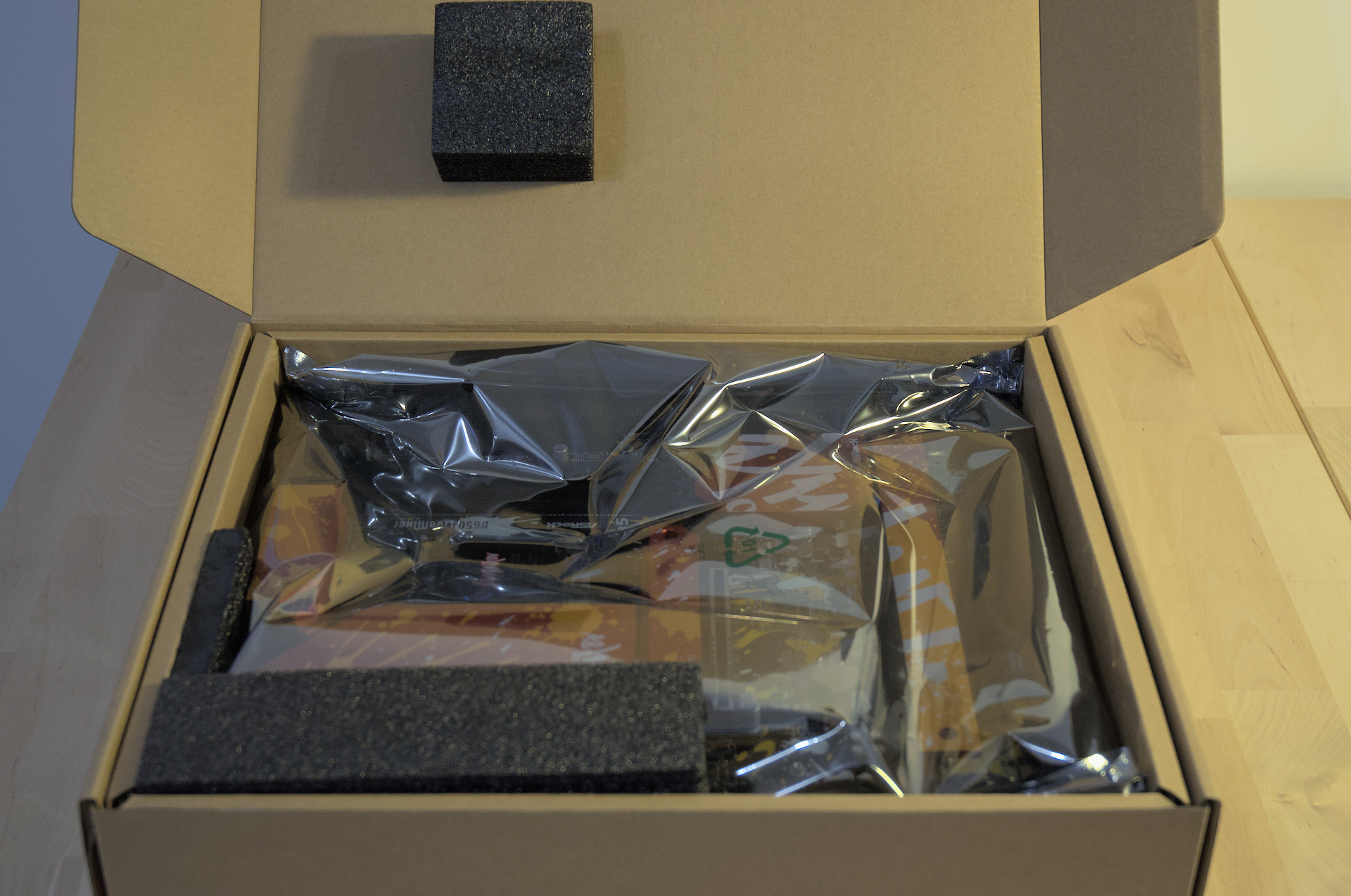 The box shows us the overall tone of the board already. Live yellow, orange, and white colors with graffiti-like titles, almost reminding of street art. The front is pretty simple with simply the stylized name, and basic marketing for the chipset, PCIe gen 5, DDR5, and HDMI. The back is a lot more detailed with a lot of different aspects of the board including pictures of the front and the back.

We also find a description of the rear IO with all the details of all present ports. Asrock advertises the main important features of this new platform here as well. We find indications for a PCIe gen 5 m2 slot, dual PCIe x4 slots, Japanese capacitors for the VRMs, DDR5 up to 128GB, a thunderbolt 4 header, and both front and read USB type C. Asrock still adds a marketing image about “clean USB power” for audio devices plugged on some USB ports and “Lightning Gaming Ports”. On paper, the idea of having high-speed USB ports for peripherals sounds great, but in most cases, those do not need a lot of bandwidth.

We also find a marketing image about a “14+2+1 Power Phase & SPS” VRM, with an 8-layer PCB. Now if you’ve been following for a bit you probably know how much I love big VRMs, but my only regret here is that the LiveMixer is supposed to be a mid-range B650 board… That VRM is already more than enough for high-end boards, but it is not “stupid overkill” yet. The 8-layer PCB is great to have at this price point, however.

Finally, we have a list of supported major features and IO devices present as well as a “Windows 11 ready” sticker.

Inside this colorful box, we find a second, plain cardboard box deprived of anything but an Asrock logo. This is actually the box that contains the board, and the thin cardboard box on top of it is just for a good outward appearance, which is fine. Inside the box, we find yet another cardboard box with no cover this time, in which we find the motherboard wrapped in anti-static plastic. Everything is well protected with large blocs of foam below, around the edges of the board, and there are two smaller blocs on top of the socket and the VRM heatsink.

Overall the amount of protection is great for this board and Asrock didn’t cheap on it at all. We basically have a double cardboard box to house it and lots of foam around the board to handle it during transport. I have to say I wish my MSI Z690 tomahawk came with all that foam. 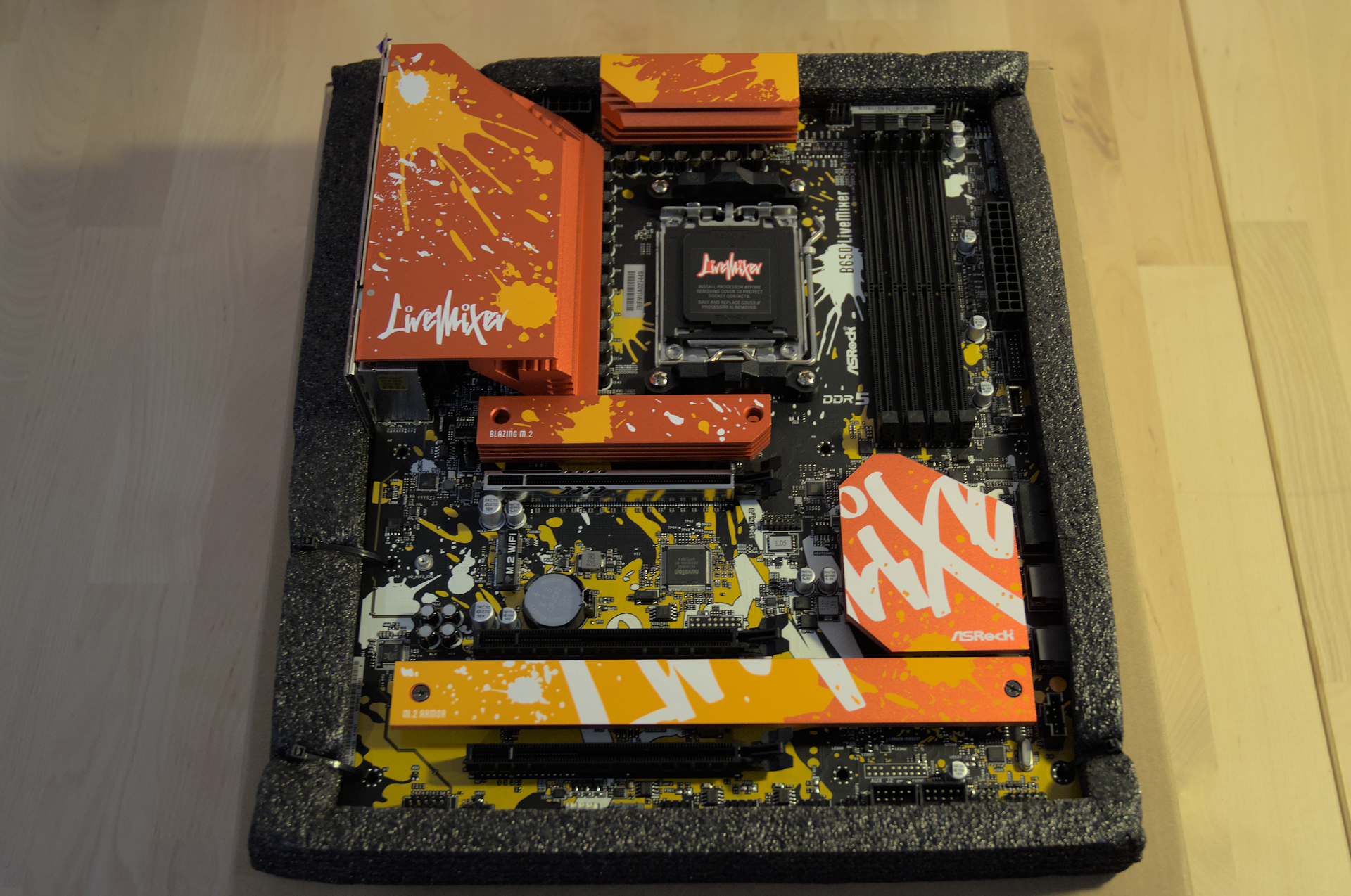 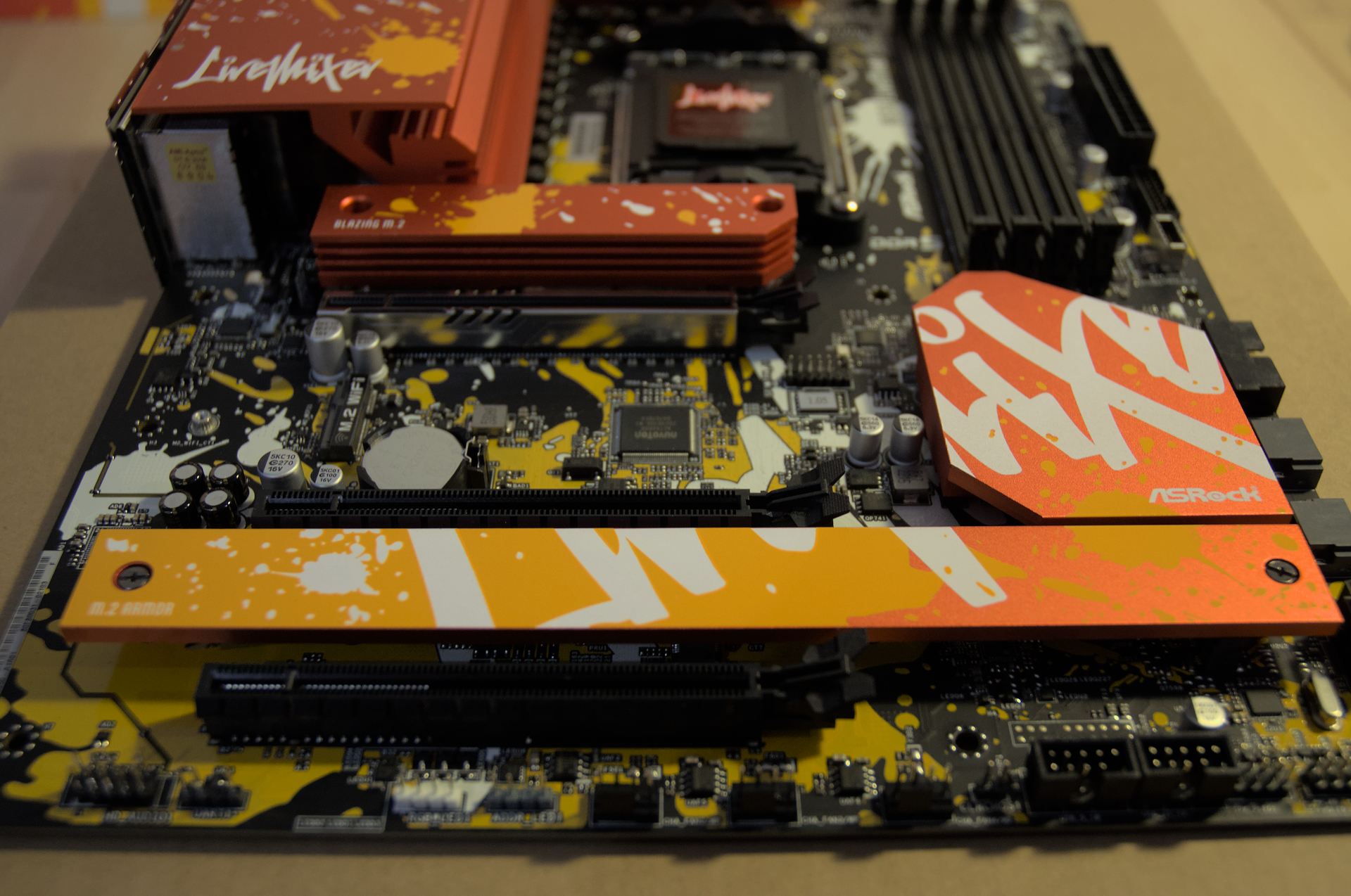 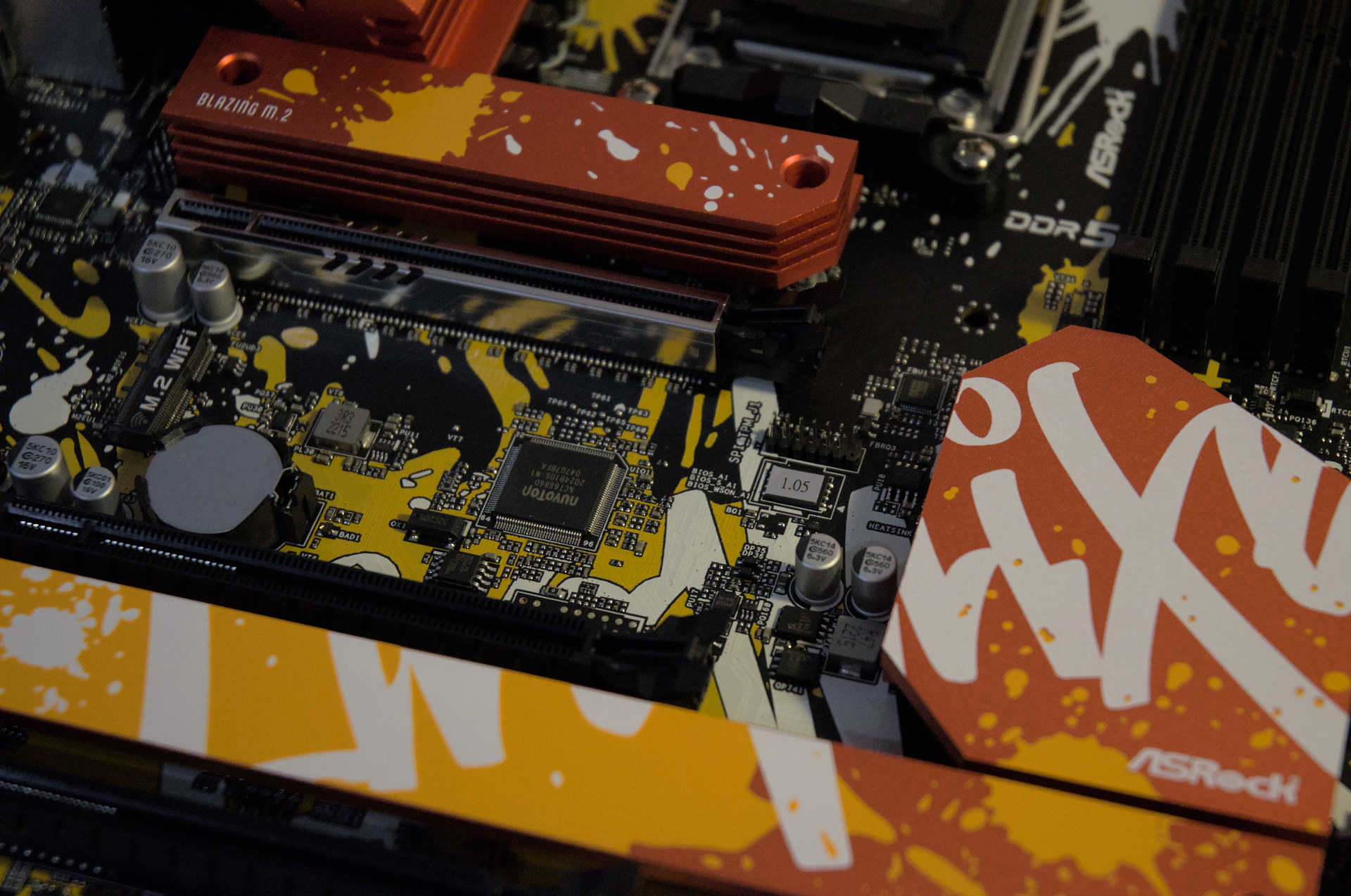 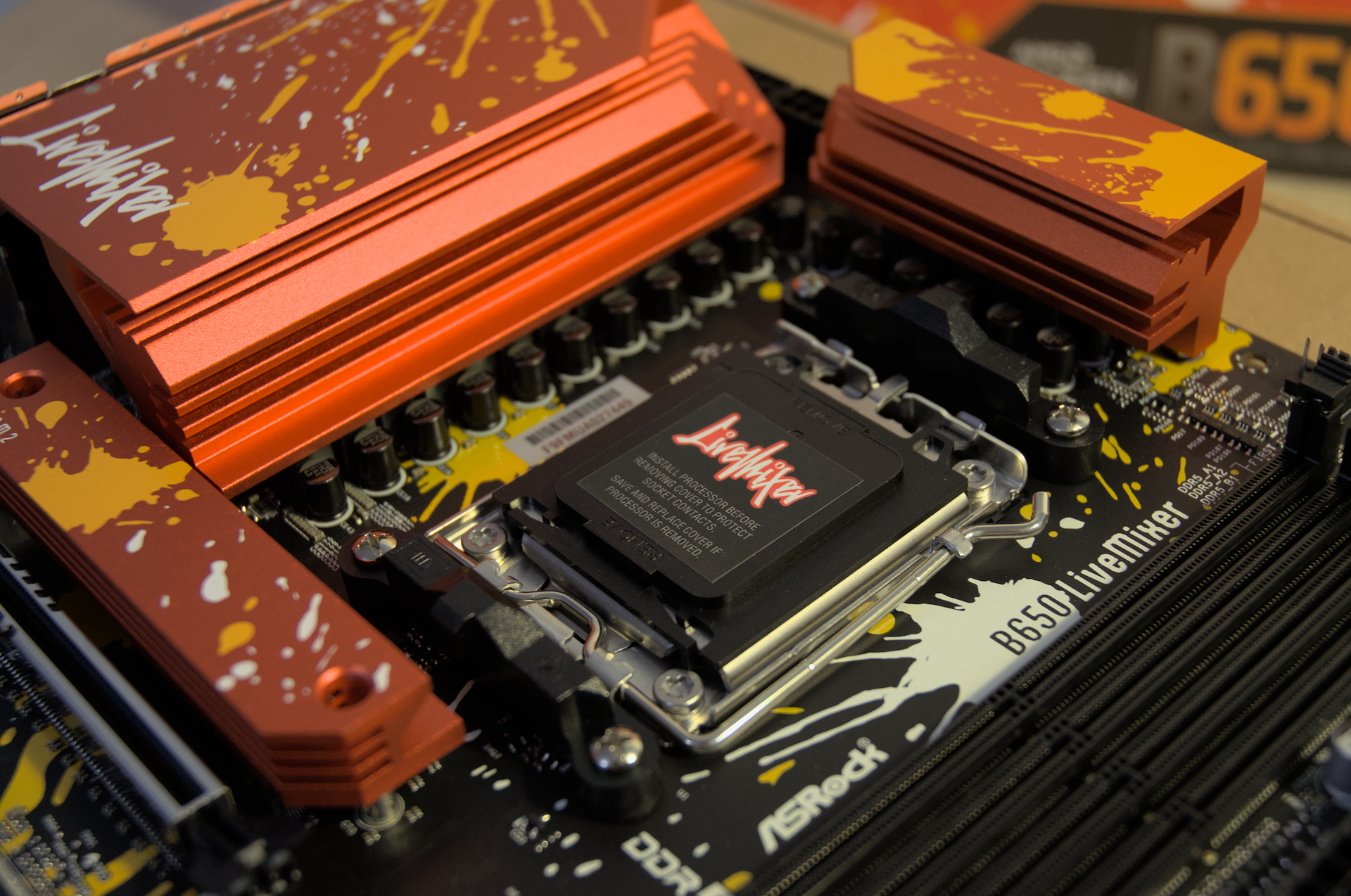 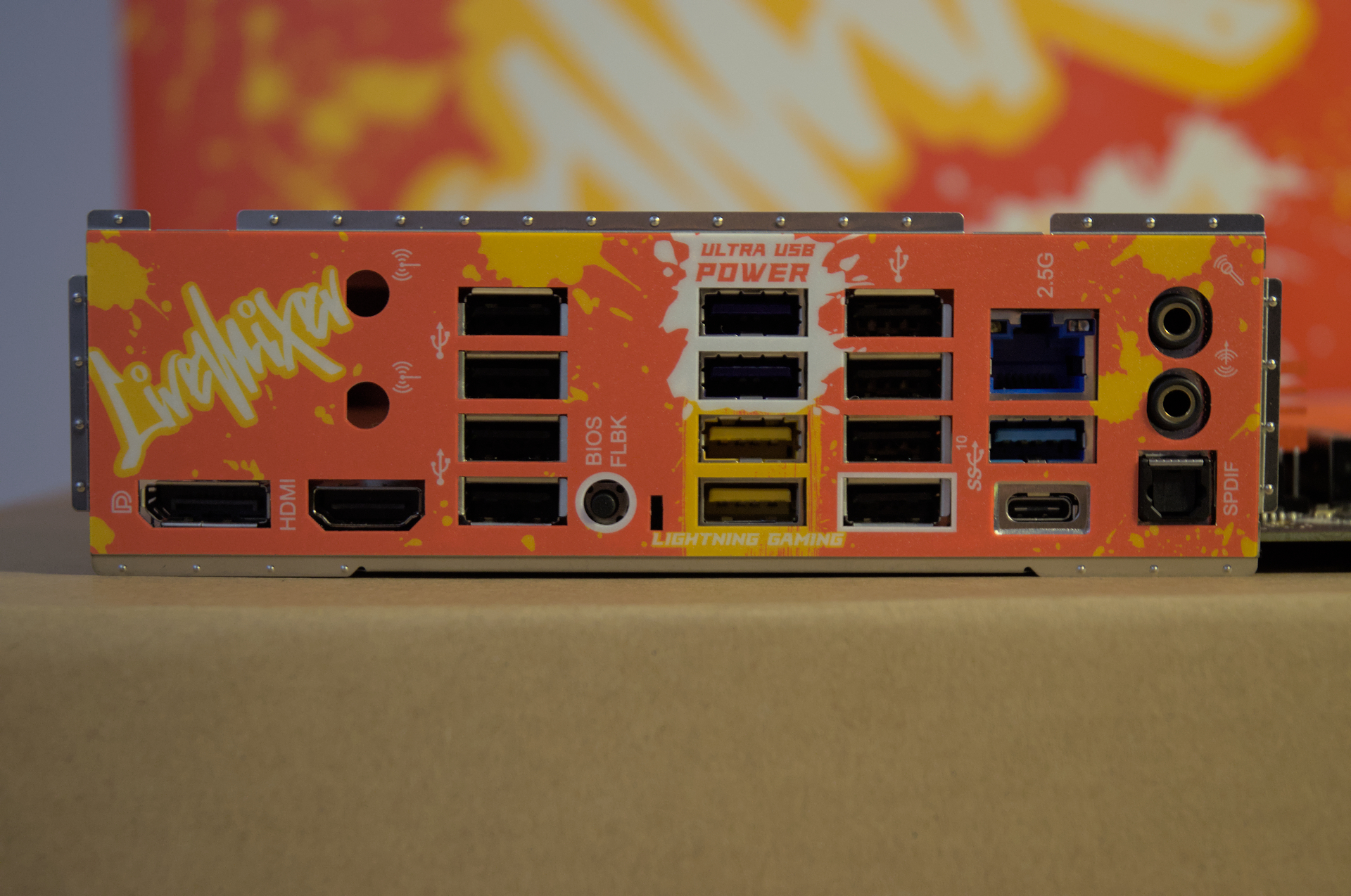 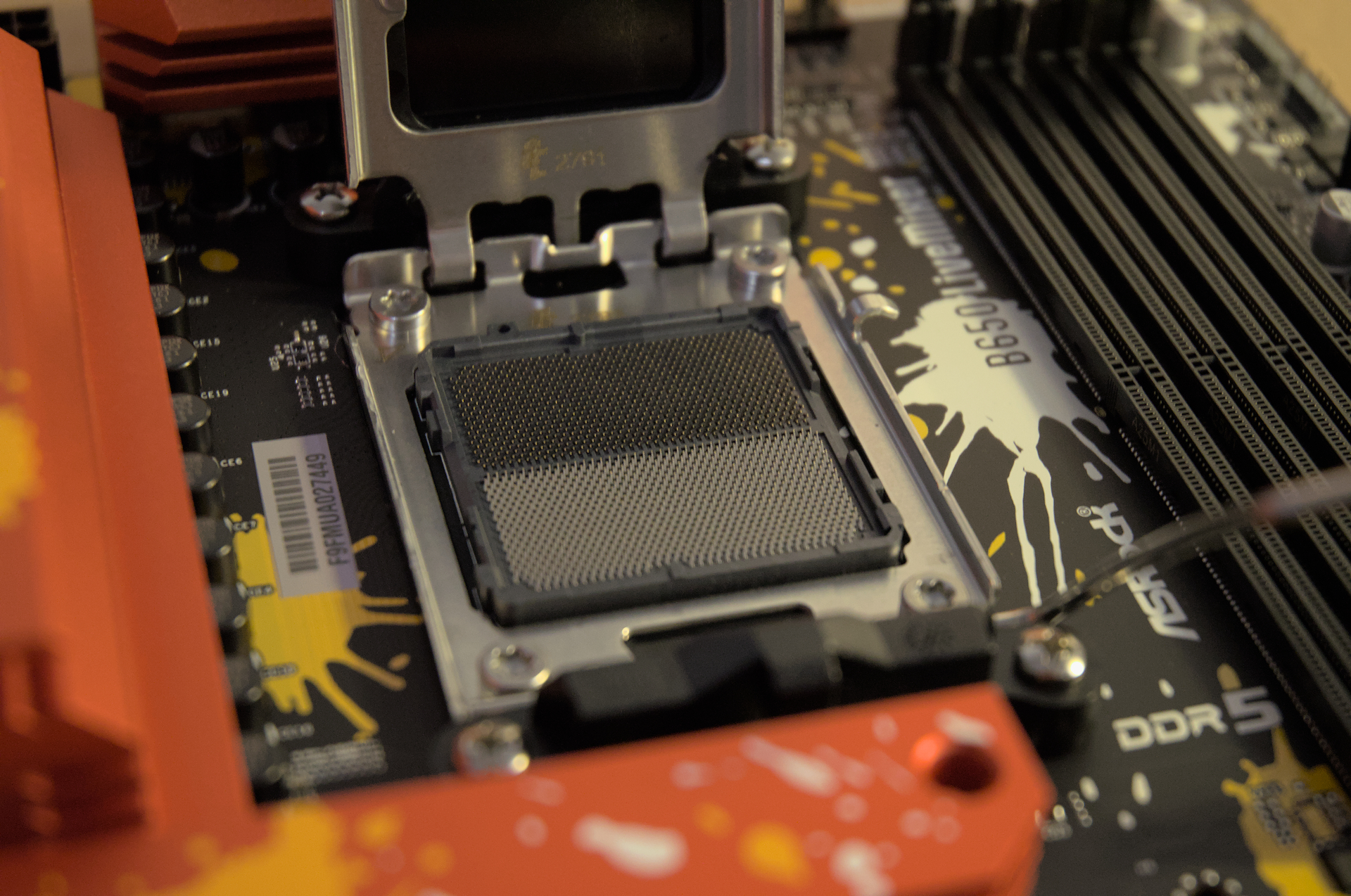 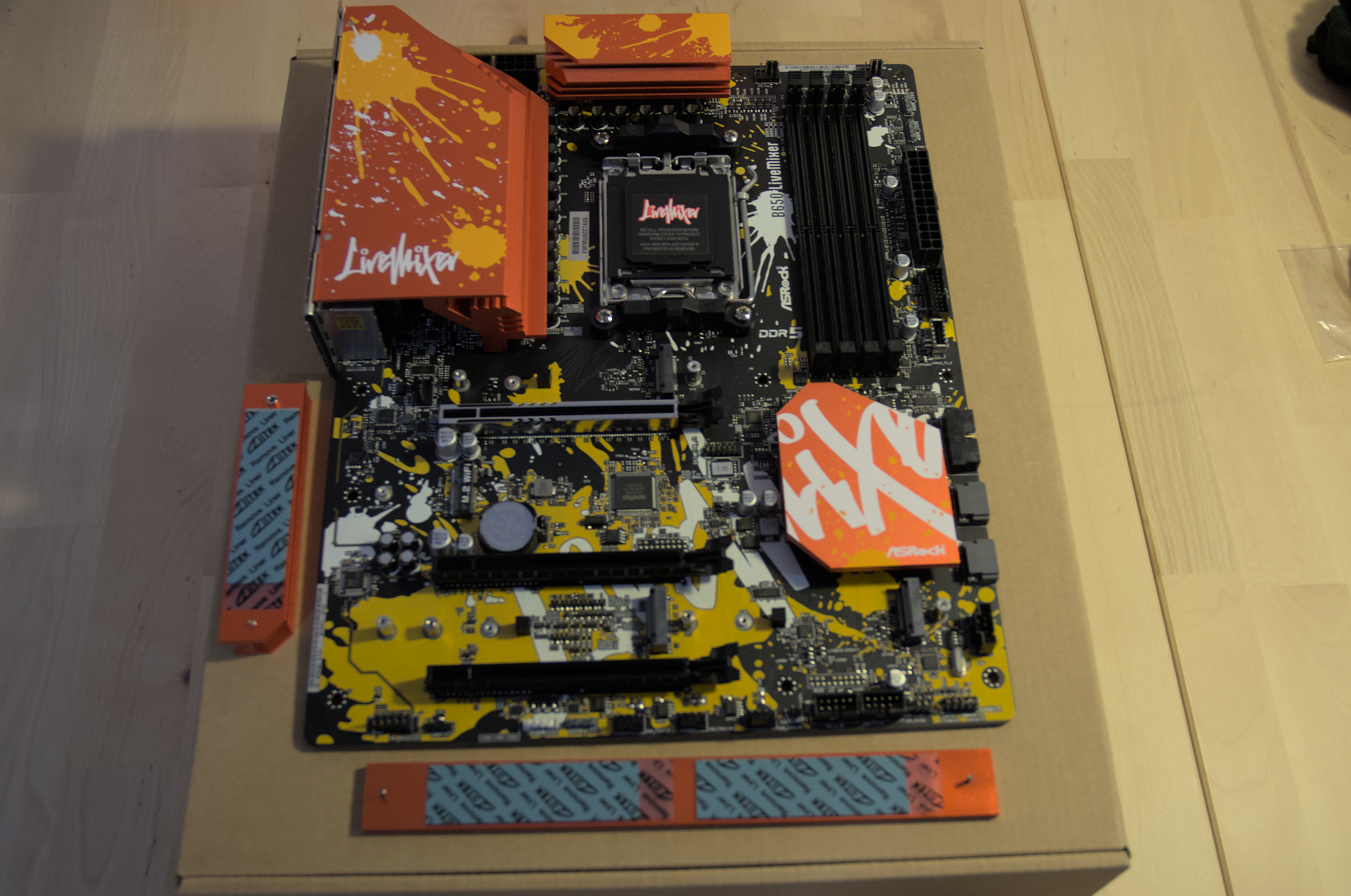 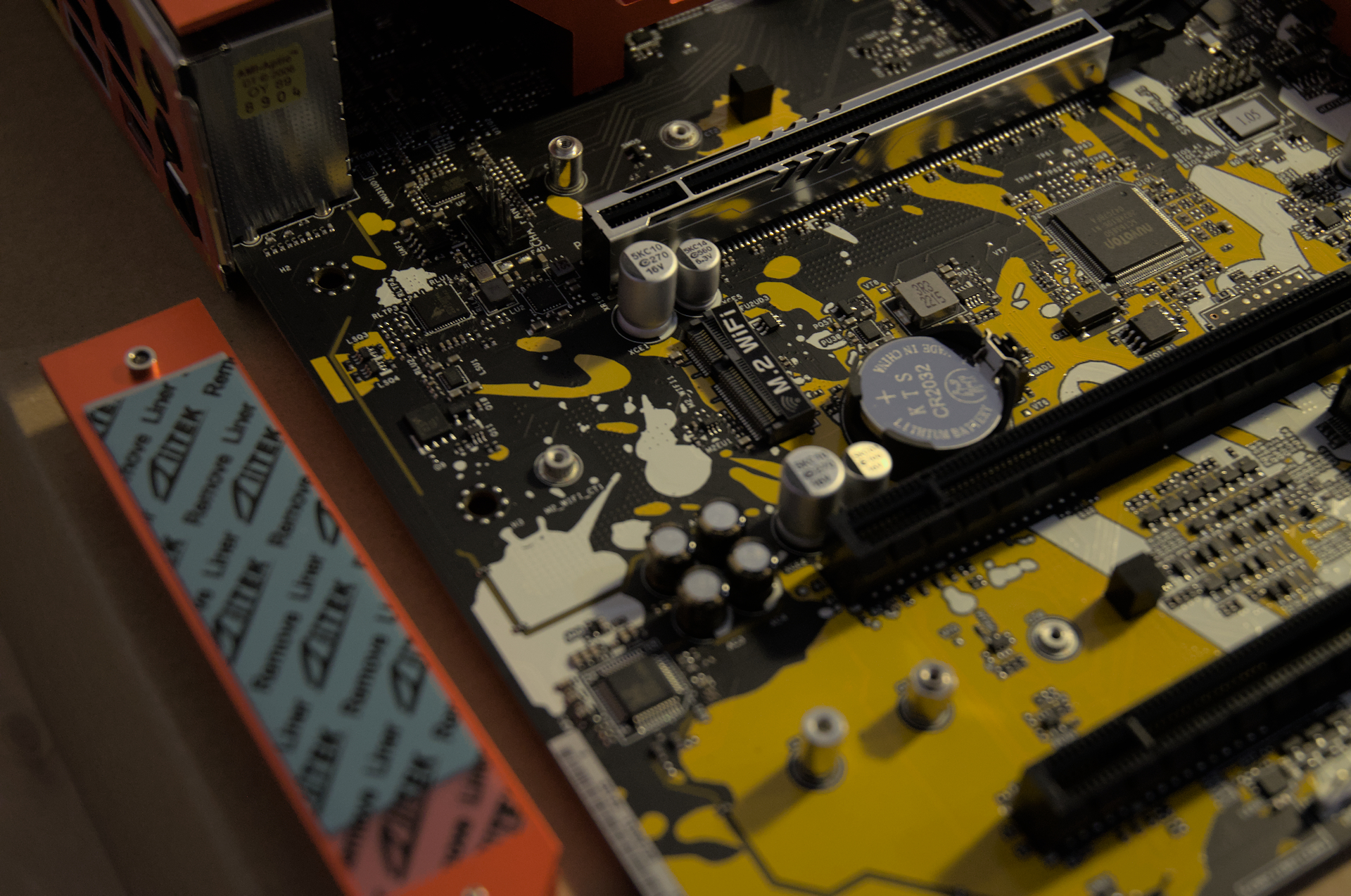 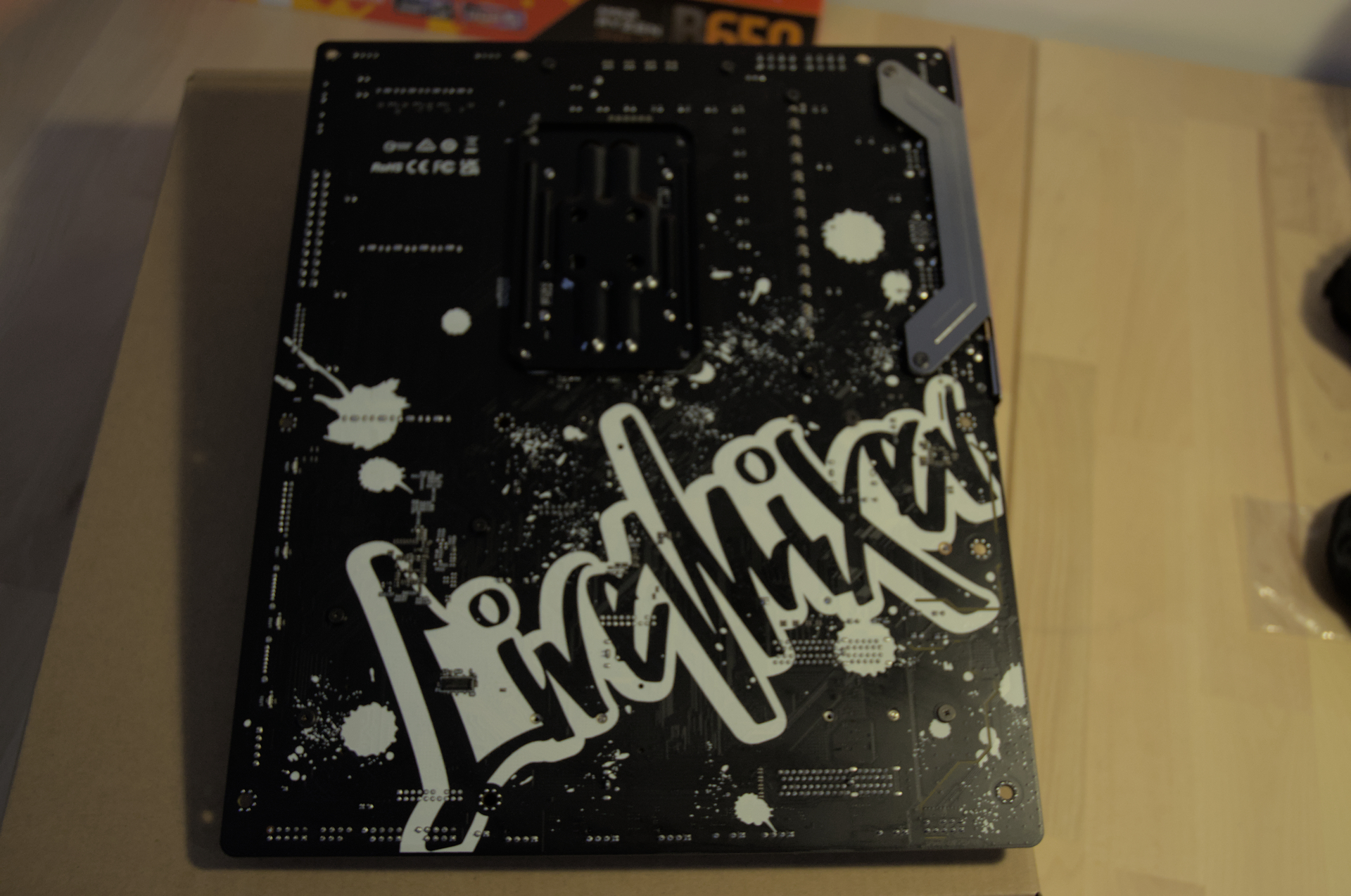 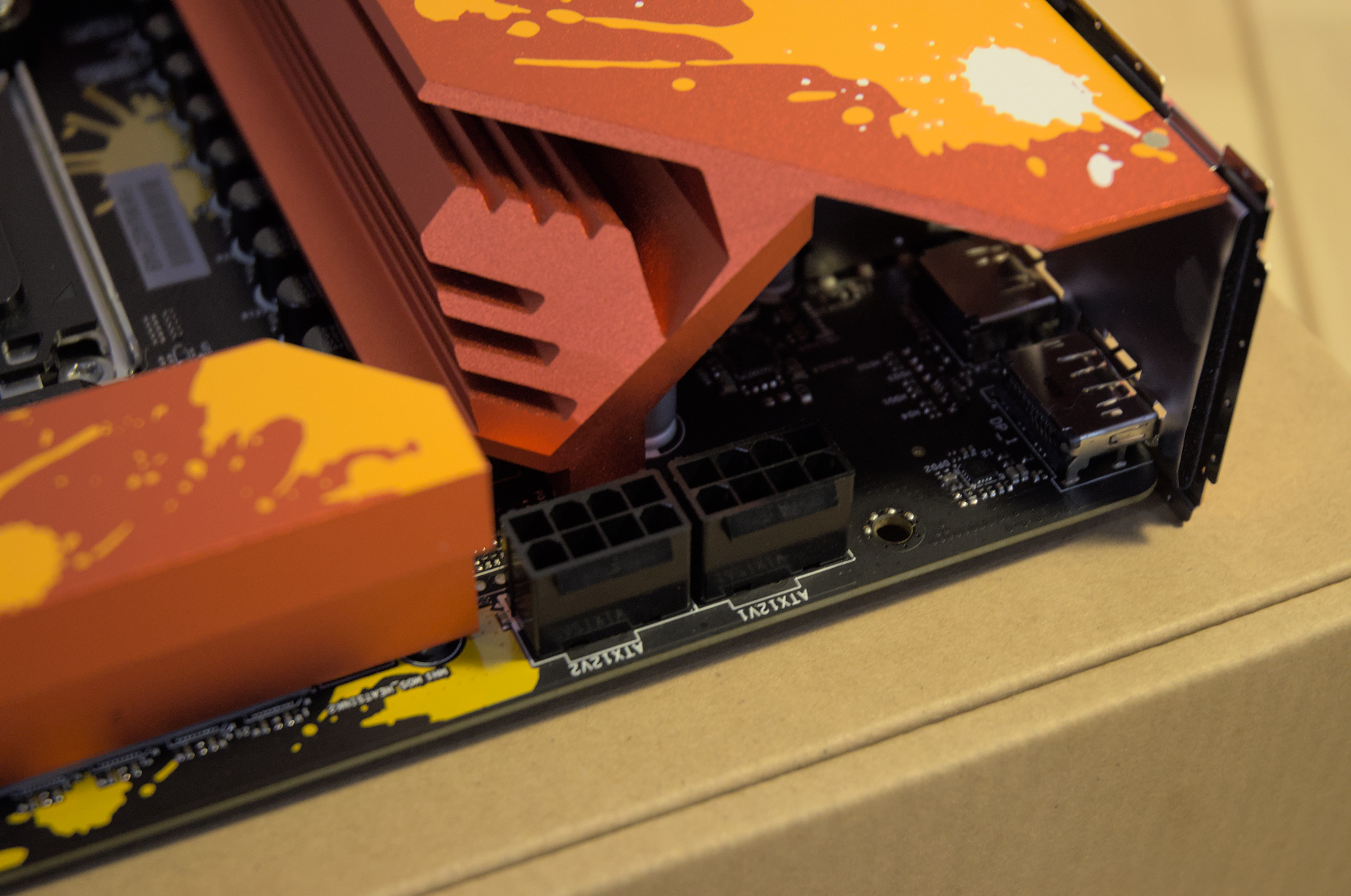 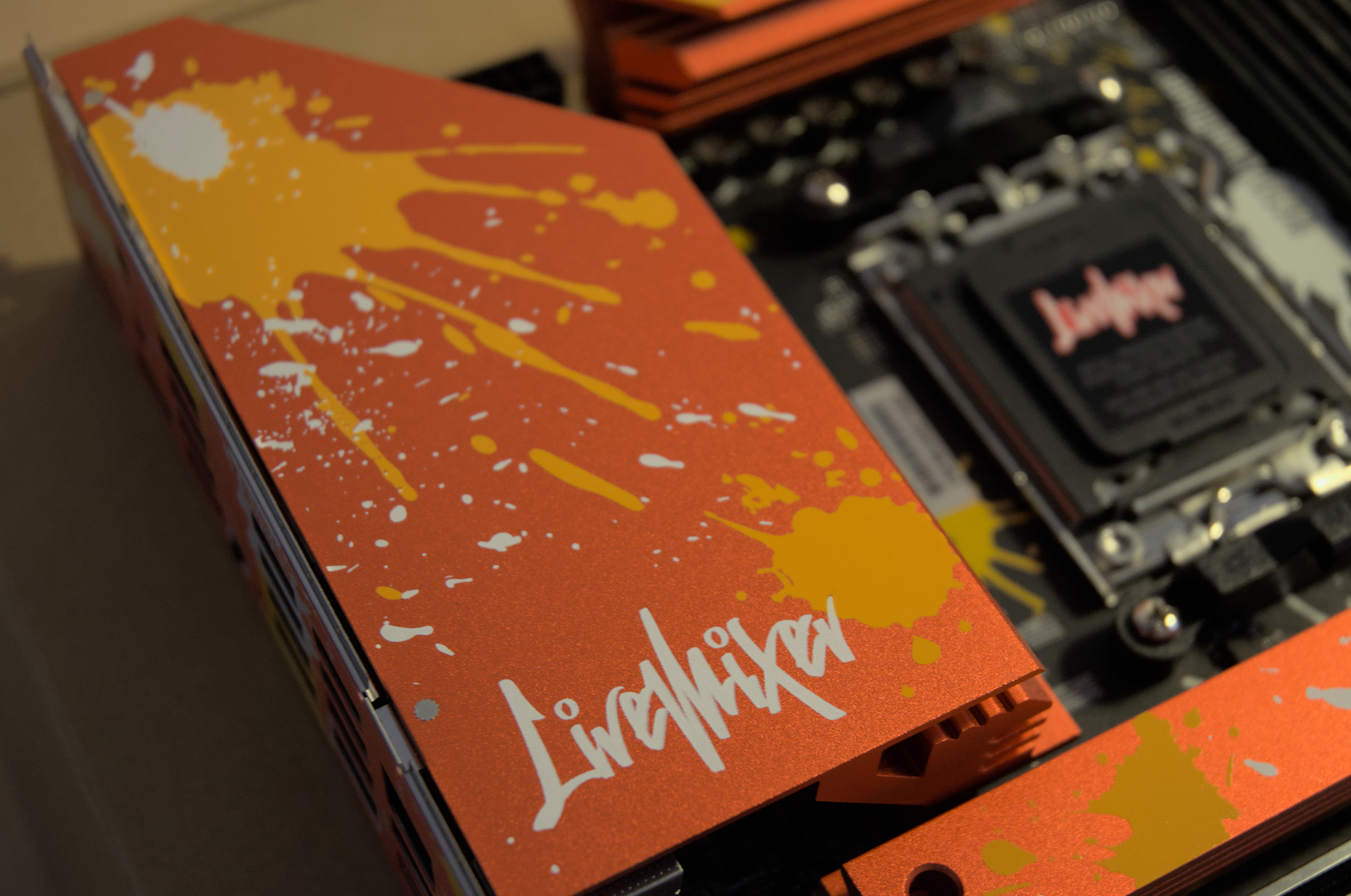 The board itself just looks great. It comes nicely packed and even zip-tied to the foam, which I think is amazing. The colors really pop out, both on the heatsinks and on the PCB. I actually wish the socket cover would be fully colored as well, but the “LiveMixer” will do here. Despite being a B650 board, which is supposed to be “mid-range” compared to the more complete X670 chipset from AMD, this board has a lot of the necessary features for most Ryzen users.

We can immediately see the important features, such as the 4 DDR5 DIMM slots, the 3 M2 slots including a PCIe gen5 one at the top under the Massive m2 heatsink, as well as a reinforced PCIe gen4 X16 slot (sadly the gen5 X16 slot is reserved to B650E or X670). Interestingly enough, I found out in the spec that the second PCIe x16 slot is connected to the CPU directly instead of the chipset but operates in X4 mode (and is only wired for X4). This means it is handy if you want to connect a little PCIe expansion card under your GPU if it is small enough.

The Rear IO is absolutely packed to the brim with 14 USB ports including one type C port. In total we have 2x USB 3.2 Gen2, 4x USB 3.2 Gen1, and 8x USB 2.0. We also find a 2,5GB Realtek LAN, a bios flashback option, HDMI, DisplayPort, and audio out with SPDIF. The only thing missing for me would be a clear CMOS button but I guess I will do without it.

All M2 slots have a heatsink with a thermal pad included which is nice. The top one is running at PCIe Gen5 X4 and the two bottom ones are both running at PCIe Gen4 X4. We can also see an M.2 slot for 2230 wifi cards in case you want to add your own. I prefer this implementation to the one where the wifi card is stuck in the rear IO for user accessibility.

For the few remaining interesting features: we find 2 USB 3.2 headers near the 24pin, debug LEDs, a clear CMOS header, only 2 SATA ports for some reason, 6 total fan connectors, dual 8pin EPS, and an internal thunderbolt header.

Finally, we can find massive VRM heatsinks with the color scheme of the LiveMixer, which makes a really great visual effect.

Beneath the motherboard, we can find the accessories coming with it. It is rather simple, but we have the essential and very important part: a complete manual. Overall we can find 2 Sata 3 cables, M2 screws and standoffs, Velcro straps for cable management, and an Asrock sticker.

With those come a full-sized manual with all details and instructions on the board and its specs and a short install guide. Despite being English-only, it is great to have it handy as I know we always end up asking people to read it to understand why their issue is expected behavior. The short install guide is to help people insert their CPU into the socket since AM5 is now LGA after long years of PGA consumer sockets.

A quick look into the manual 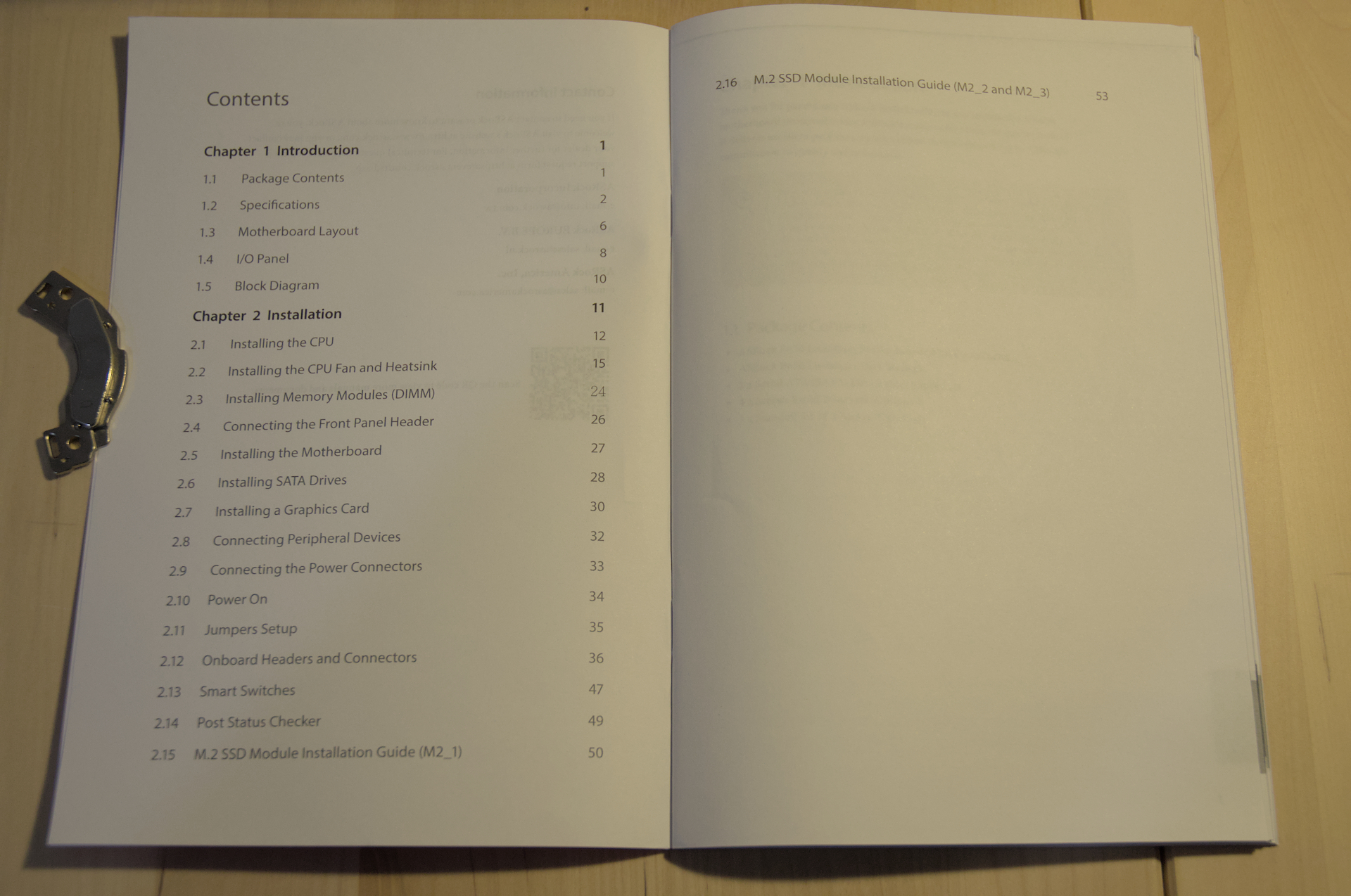 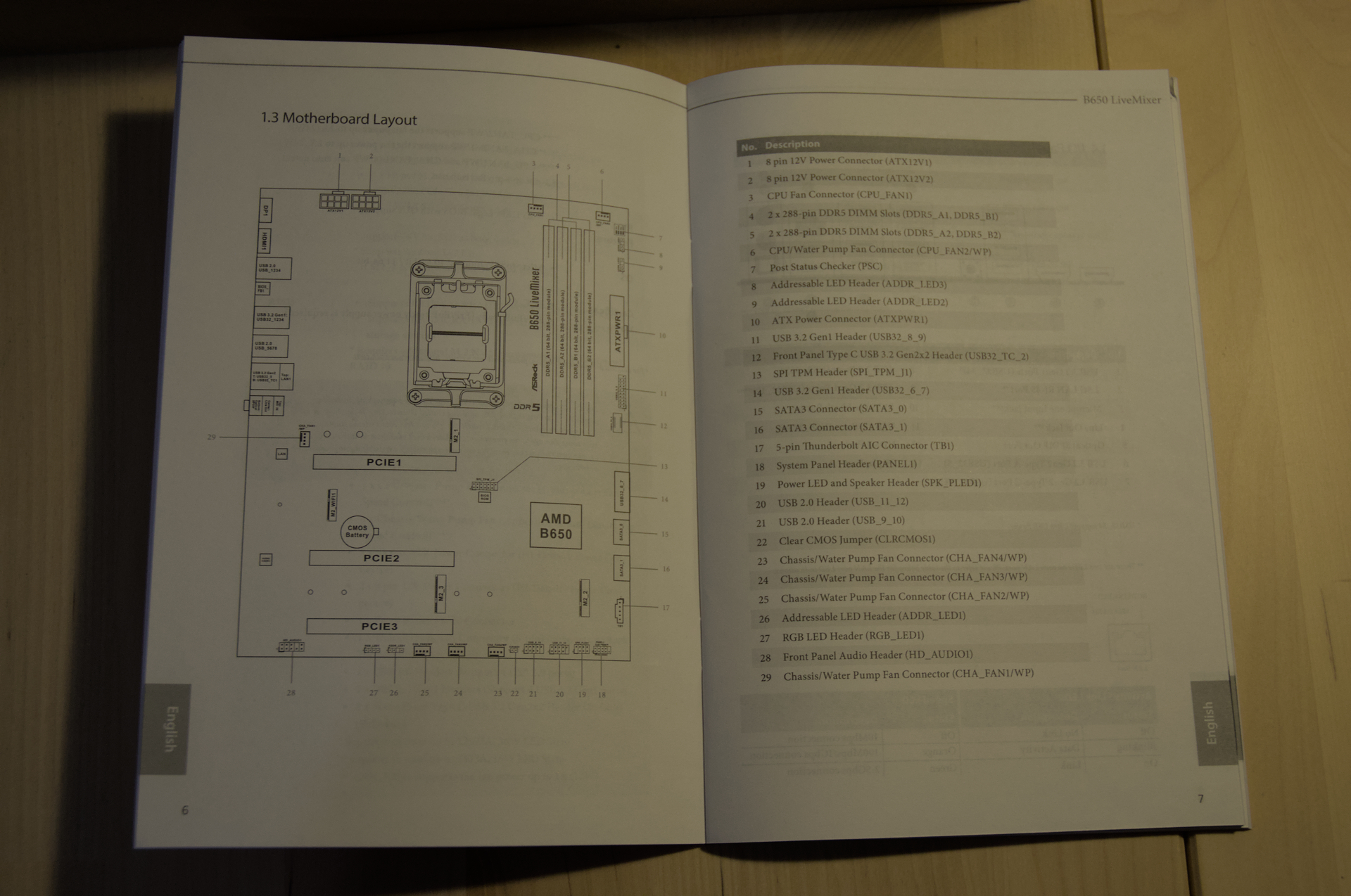 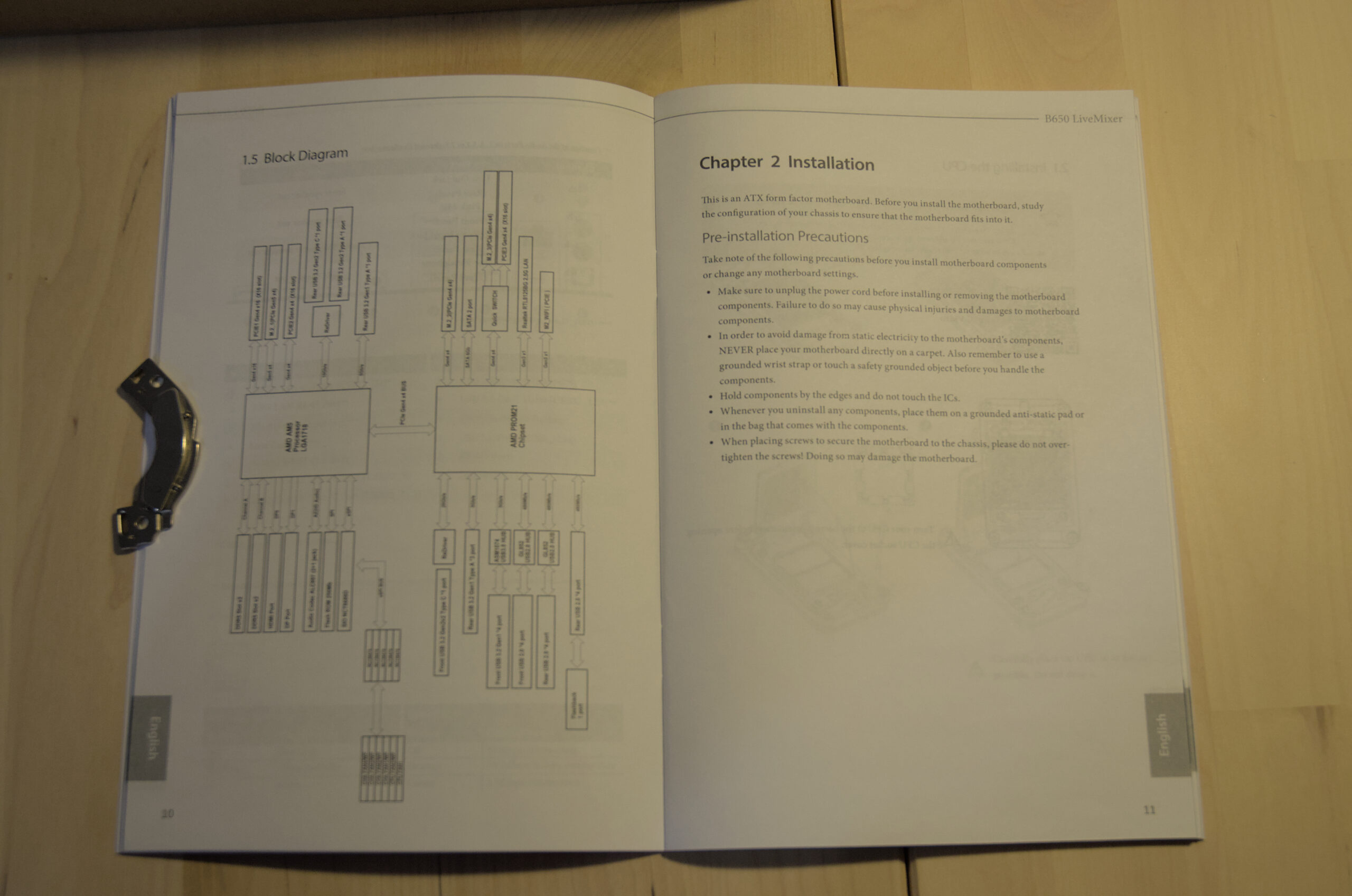 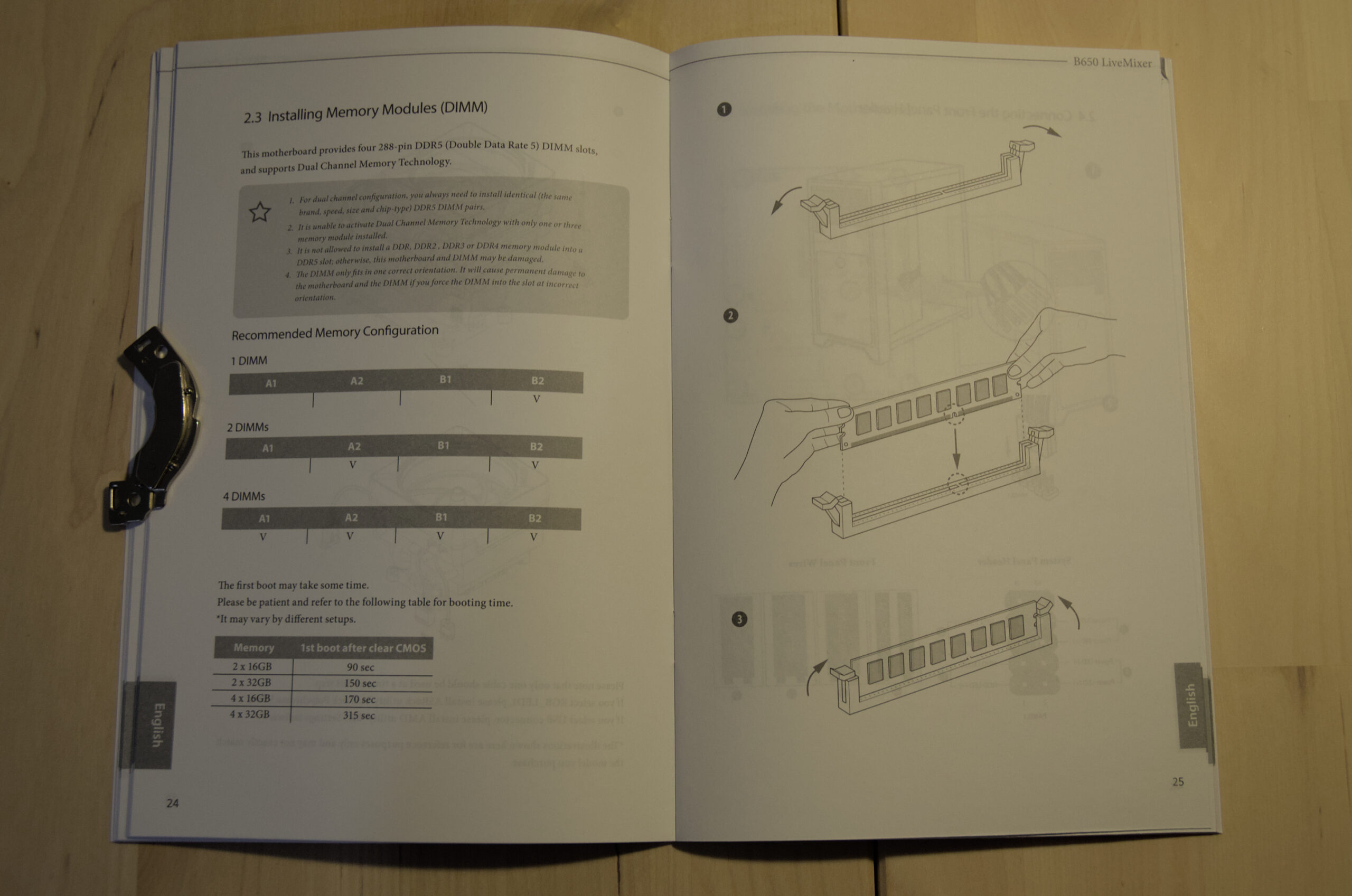 This is just browsing a few pages to show why a full-size manual is very useful (be it paper or digital online). The table of contents shows me early that there is a lot of information about all the IO and features on the board I can look at. Very early on I can even find the diagram of the board with the position of every single usable connector and header, which is one of the most important pieces in the manual for me and people building.

I could also find a block diagram of the socket and chipset for those more interested in the logic part of it. And finally, information on ram installation which is think is slightly disappointing, simply because the preferred slots are marked in a table instead of a dedicated drawing. However, the second best thing I found was the 1st boot time after a clear CMOS which I believe should be even on a dedicated paper on the board so people that don’t bother reading the manual are still aware of it.

As a reminder, those boot times are just the state of AM5 right now. It is more or less the same for everyone and there is not much we users can do.

I think it is pretty clear already, I really like this board. The color changes look absolutely stunning in person and I am so happy someone is finally breaking from the boring black and red “gamur esthetics” that all vendors have been doing for so long. The last time I was excited about colors like that was either motherboards from the Asian market or the Z590 Force with pink and yellowish accents. Why are actual color themes so frowned upon in the hardware market?

Spec-wise, the board is pretty well built too. We have a great VRM that will handle any Ryzen CPU I can throw into the socket, decent ram compatibility advertised at 6400+ MHz, and plenty of connectivity and IO. The neat part is the extra PCIe x4 slot that is somehow connected to the CPU instead of the chipset, which I really like.

The packaging is top-tier with all the protective foam. For a second I almost thought it was a higher-end board.

There are some cons depending on the buyer, however. Some people may find the lack of SATA ports an issue if they have multiple SATA drives. This can happen for those with lots of hard drives or upgrading from really old builds when NVMe wasn’t so easily available. And the obvious one, the color theme is not for everyone.

Asrock is taking a risk here with this style of esthetics. As much as I like it because it breaks the boring scheme of overall dark colors, some people won’t find it attractive at all. But thankfully there is still plenty of other options available on this chipset for that.

This board will be featured in more reviews very soon, including a Zen 4 review and more. Be on the lookout for that on our main site!

The Asrock B650 Livemixer’s manufacturer information can be found on the main Asrock site here.