Today, we’re going to be covering AMD‘s event at CES 2023. We should expect to hear more on non X-skews for Zen 4, 3D V-Cache parts and much more. AMD is streaming their event live on their YouTube channel.

So, let’s get started with the coverage.

AMD CEO Lisa Su starts the show by highlighting the power of AI in the industry. She goes on to announce AMD XDNA architecture. This technology implements AI accelerators in the notebook sector to compete with the likes of Apple. Through AMD’s acquisition of Xilinx, this technology will be implemented directly into the Ryzen Mobile 7040 series. The 7040 series will be based on TSMC’s 4nm process, with 8 Zen 4 cores and up to 5.2Ghz boost. The AI accelerators can handle 4 AI streams simultaneously with 12 trillion AI ops per second. AMD benchmarks show the 7940HS up to 34% faster than Apple’s M2 and 45% faster than Intel’s x86 parts in multiprocessing. Additionally, it is advertised as up to 20% faster in dedicated AI tasks compared to the M2, and 21% better in gaming. With a 15-45W TDP, efficiency has been vastly improved with 30+ hours of video playbacks on notebooks. Products will start shipping March 2023.

Collaboration with Microsoft and HP

Microsoft and HP are both huge customers to AMD. AMD is working with Microsoft to implement Windows Studio effects(AI video enhancements) such as Portrait Blur, eye contact, and automatic framing. HP is announcing the HP Dragonfly Pro in collaboration with AMD as a workstation laptop.

The 7045HX series is AMD’s first iteration of chipset designs on mobile chips. Featuring up to 16 Core 32 Thread Zen 4 parts and up to 5.4Ghz boost, these chips may change the laptop landscape rapidly. The chips also feature 80MB of combined L2+L3 cache on TSMC’s 5nm process. They will also feature RDNA2 graphics.

AMD’s benchmarks shows on average 24% higher performance across a range of games, and approximately 60% faster in productivity compared to the 6900HX. Up to 78% faster in multitasking.

AMD also announced the 7600M XT on TSMC’s 4nm process. It features 8GB GDDR6, 128 bit memory bus, with configurable TDP ranging from 75-120W. On average it is advertised as being 26% faster compared to the previous generation. Availability will start from February 2023. Lenovo will be featuring 50+ different designs featuring AMD chips. This includes the Legion Pro laptop series featuring 7045HX based chips. 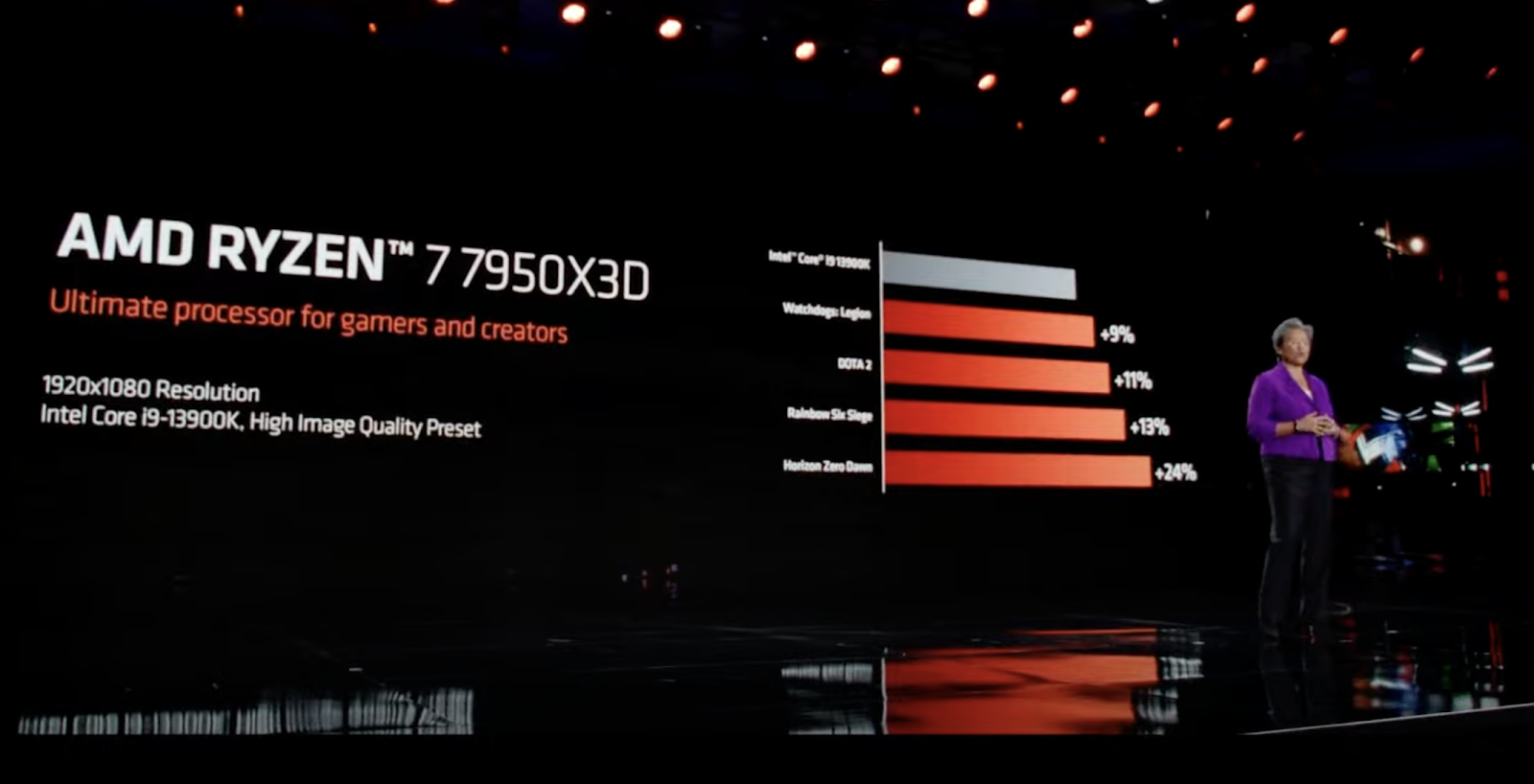 AMD has announced their 4th generation of EPYC processors. The product stack goes up to 96 Cores, features 12 DDR5 memory channels, PCIE 5.0 and is based on TSMC 5nm. They tout that the EPYC 9654 is up to 3x faster Cloud performance, 2.5x in HPC, 2.9x in Enterprise Performance and 2.6X in Performance per watt.

In addition, AMD announced the Alveo V70, an AI inference accelerator. This is based of the XDNA AI Engine, has 400 TFlops of AI compute performance, PCIE 5.0, and has a TDP of 75W, while being able to process 400 Trillion AI operations. They tout up to a 80% improvement over Nvidia’s T4. Pre-Orders start today, with availability Spring 2023.

Finally, AMD has completely revolutionised the product stack by announcing the World’s First integrated Data Center CPU + GPU + Memory with the Instinct MI300. MI300 combines CDNA and 24 Zen 4 Cores. All of this is contained in a die consisting of 146 Billion Transistors with 3D Chipset Stacking.

The structure of the die is incredibly impressive. 9 5nm chipsets are 3D stacked onto of 4 6nm chipsets with 128GB of HBM3 stacked around it. AMD touts 8x more performance and 5x better efficiency than the MI250X. MI300 will be coming in 2H 2023.