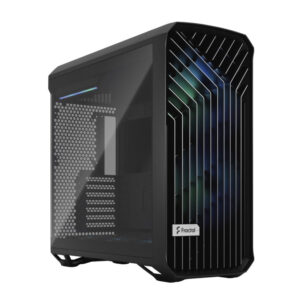 Today, Fractal has taken a unique spin on the Case Market with the release of the Torrent Series of Full Towers. The Torrent series is unlike what Fractal has done in the past, taking a fancy spin on the Full Tower market, with an approach towards High Airflow and Water Cooling in mind. Fractal has conventionally taken a minimalistic approach to design such as what they’ve done with the Meshify and Define series of cases, but this time it all changes.

To start out, the exterior is totally different and consists of a metallic mesh-like design on the front panel, so we expect that this will aim and succeed at its job of being a high airflow case. The case also comes with a new layout with large expandable base intakes with room for bottom fan support to cool the Graphics Card. The case by default comes with Five PWM Fans(Three 140mm and Two 180mm) with two mounted in the front and three mounted on the bottom. In addition, the case comes with a PWM Fan Hub like most cases nowadays. The case can support up to SSI-EEB Motherboards and support plenty of water cooling, with radiator support being up to 420mm on the front and bottom. For those who are water-cooling enthusiasts, there is integrated support for a water-cooling reservoir on the motherboard tray.

Finally, to appeal to the world of RGB and aesthetics, there is an RGB Version of the case that replaces the Dynamic X2 PWM Fans with Prisma AL PWM ARGB Fans that are controlled through motherboards supporting ARGB(3-pin 5V Headers).

Pricing comes at USD 189$ for the basic models that come in Gray, Black, and White, and 229$ for the ARGB version. The Gray and Black editions come with either a dark tint or light variation, in addition to choices for a solid or Tempered Glass front panel.