KINGPIN is regularly known to be the face of EVGA when it comes to the Extreme Overclocking community. Today, he revealed an image of the X570 Dark on his Facebook Page.

EVGA’s Dark series of motherboards have always been known to be catered purely for the enthusiast-grade overclockers that want to push their gear to the limits. Since the Z390 Chipset, EVGA has been pushing the Dark series towards the Intel side with the release of Z490 and Z590 tier Motherboards soon after. The introduction of the X570 Dark introduces EVGA into the saturated Motherboard market for AMD Ryzen series-based Processors.

The motherboard is on the AM4 socket and is confirmed to be based on “X570S”, as it doesn’t feature active cooling like X570 board counterparts. We’ve been getting constant teasers from Kingpin and EVGA for the past few months to reveal something coming, and today reflects it all. The X570 Dark has all the features you’d expect to see from a Dark Series board. This includes the horizontally placed RAM Slots to improve signal integrity and the right-angled power connectors for ease of cable management on Test Benches. 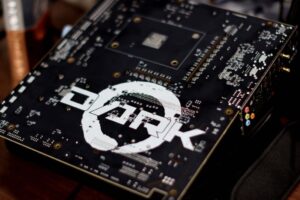 The board is filled to the brim with overclocking features you’d come to expect such as buttons and LN2 Jumpers. It comes with a 16 phase Digital VRM and huge aluminum finned heatsinks, all connected by a copper heat pipe to the chipset cooling. EVGA has designed the Dark with two PCIe Gen 4.0 x16 slots, a 3.0 x4 and 2 M.2 Slots that are Gen 4 lane linked, in addition to all the standard features you would expect on a high-end motherboard.

Currently, there is no word on pricing and availability worldwide, but don’t expect it to be cheap.