It’s finally time for Intel to present its brand new desktop graphics cards for the gaming market. After years of waiting, we now have a “third option” with team blue. After the more silent launch of the A380 a while ago, we now have the Arc A770 and A750 that released worldwide in the first half of October.

Intel released both card with a “Limited Edition” which is the equivalent of Nvidia’s Founders edition or AMD’s Reference edition. I’m not sure if they have an official name so i’ll just call them reference cards too.

Obviously without review samples, I had to wait for retail models to get here for review, which is due soon after this article, as well as a teardown. I got both models in for special inspection, so let’s see what we are looking at here. 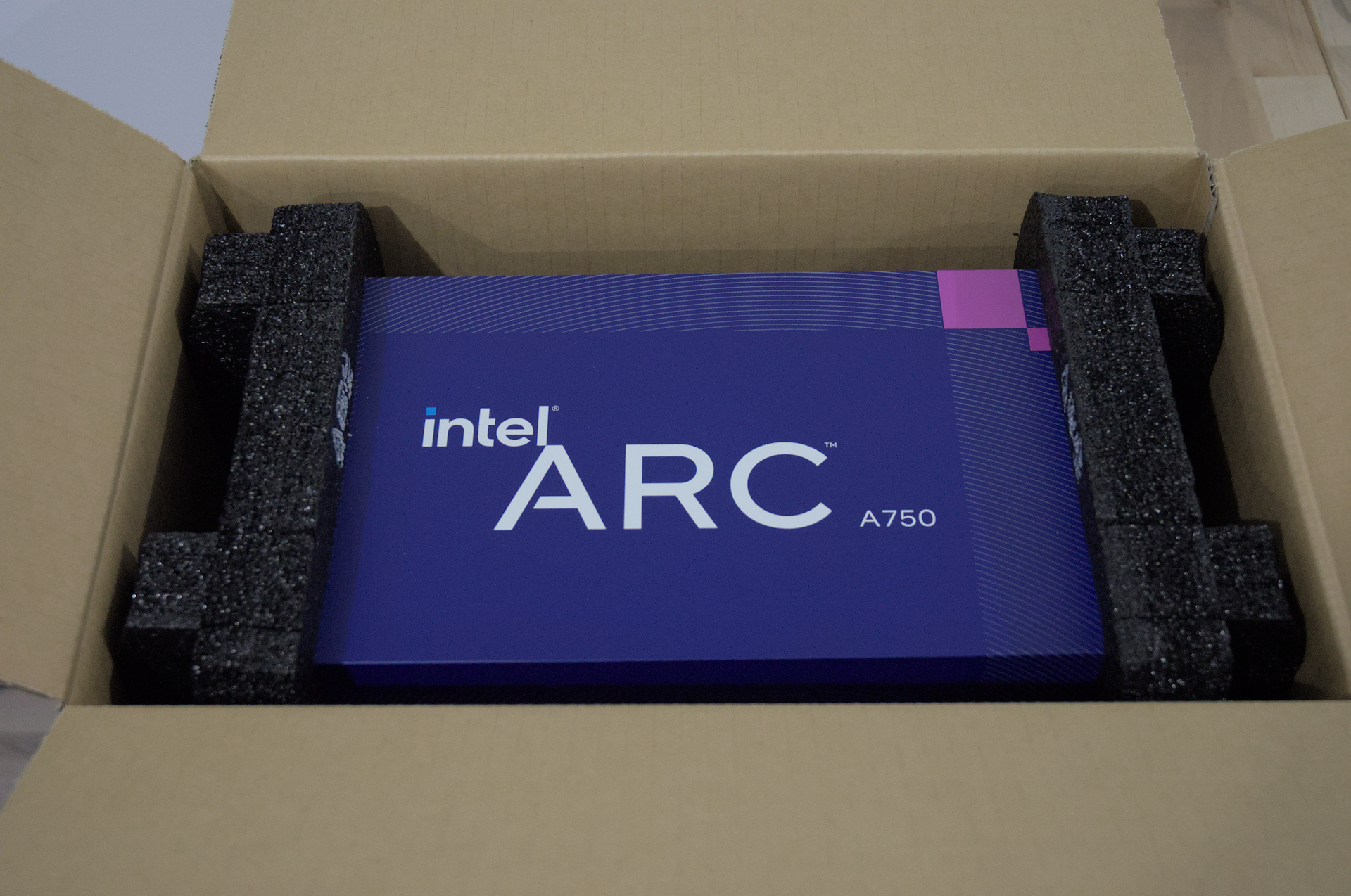 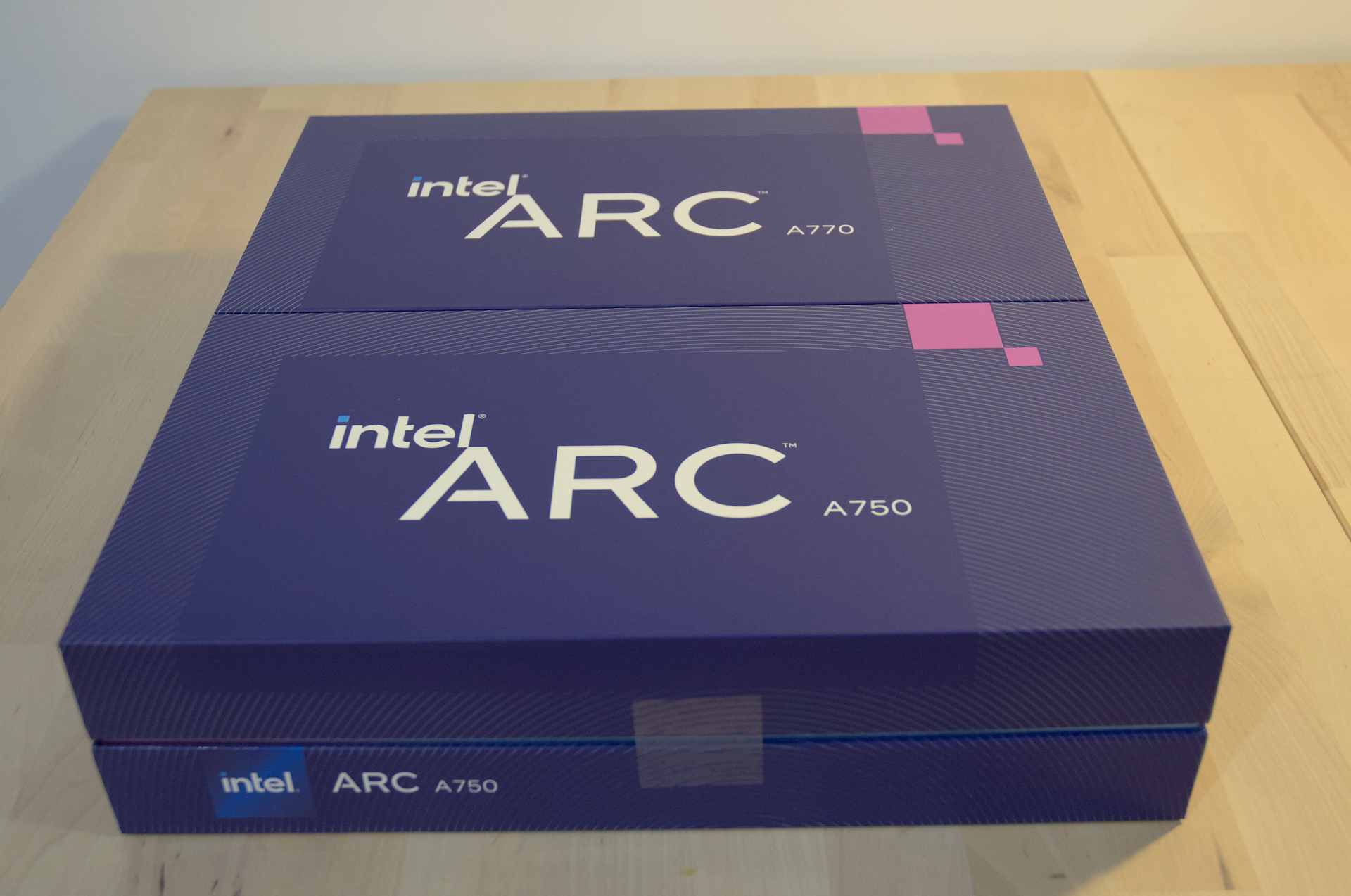 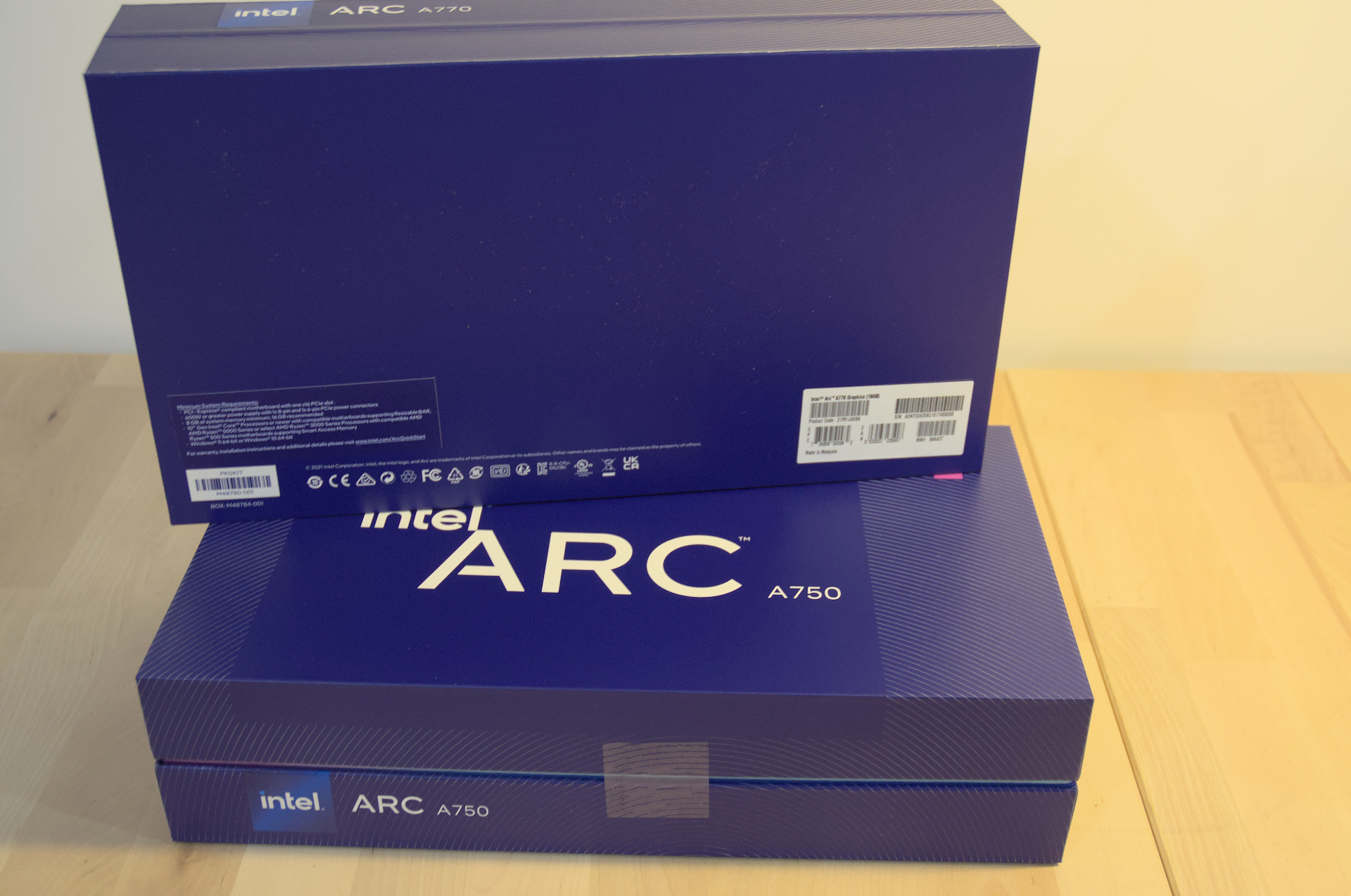 First things first, this is how it arrived and this explains why the boxes were so damn big. Double boxed and protective foam between the two boxes. If this is how Intel does it, they are not messing around with protection for shipping here. Once we get inside, we see a similar box for both GPUs in blue Intel branding and the model specified on top. What surprises me is the fact that there is absolutely no marketing whatsoever. Nothing anywhere, not even specs or a slogan. Even my RTX 3070 Founders had basic specifications and what the box included written on the back. This one is really empty on this point. I personally like it as is, but some might like a bit of description to help them buy in store if they are. 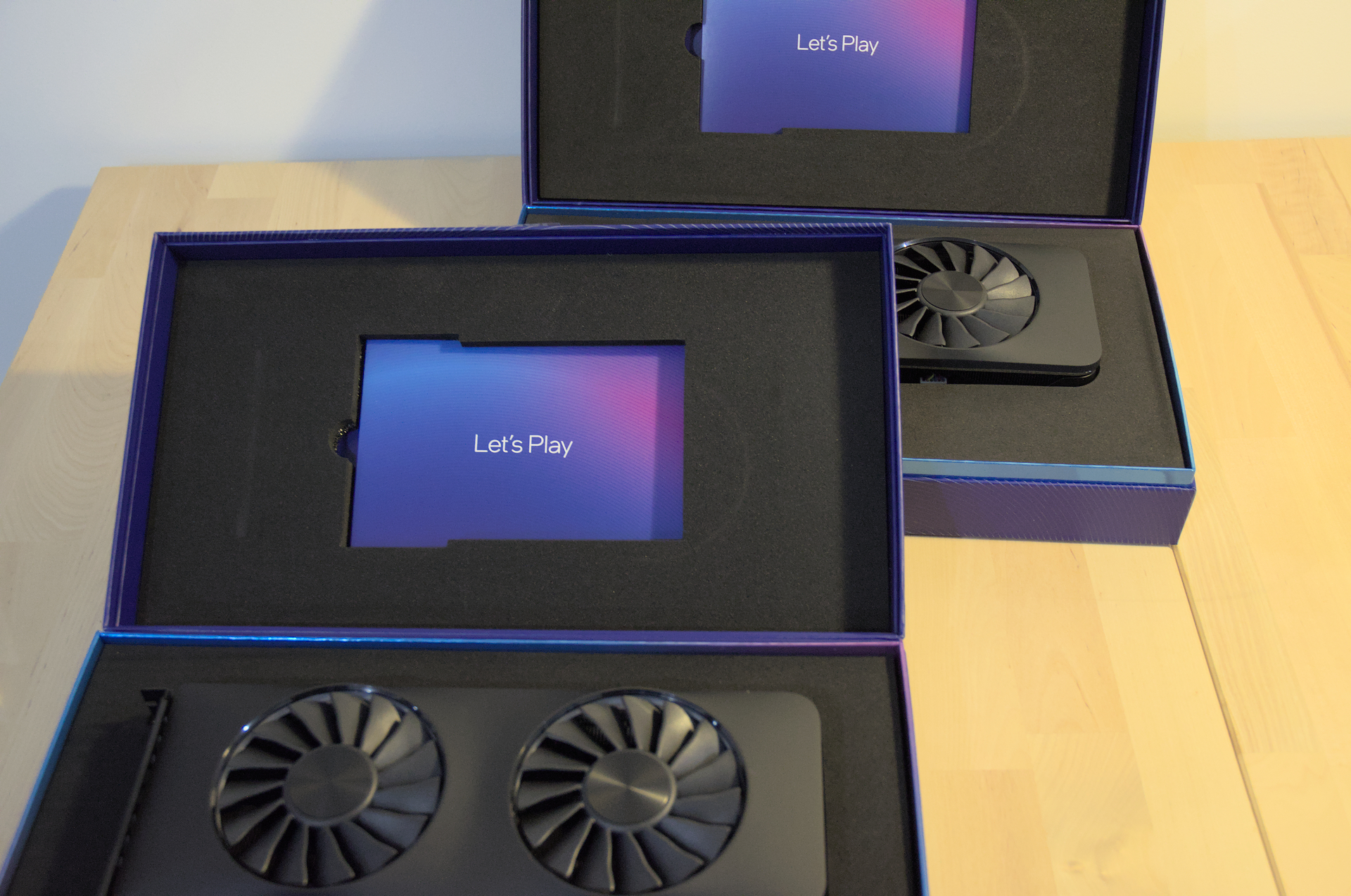 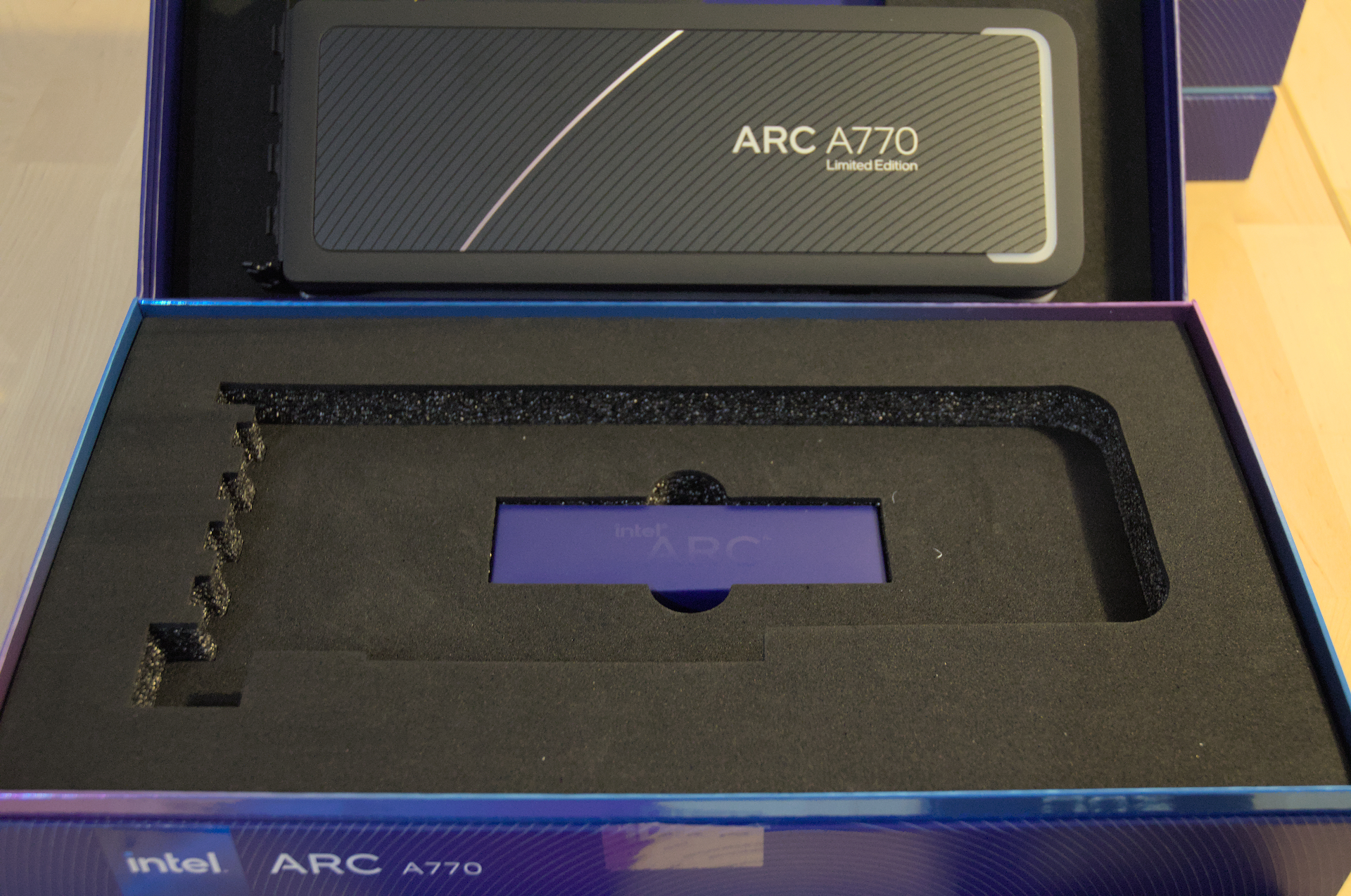 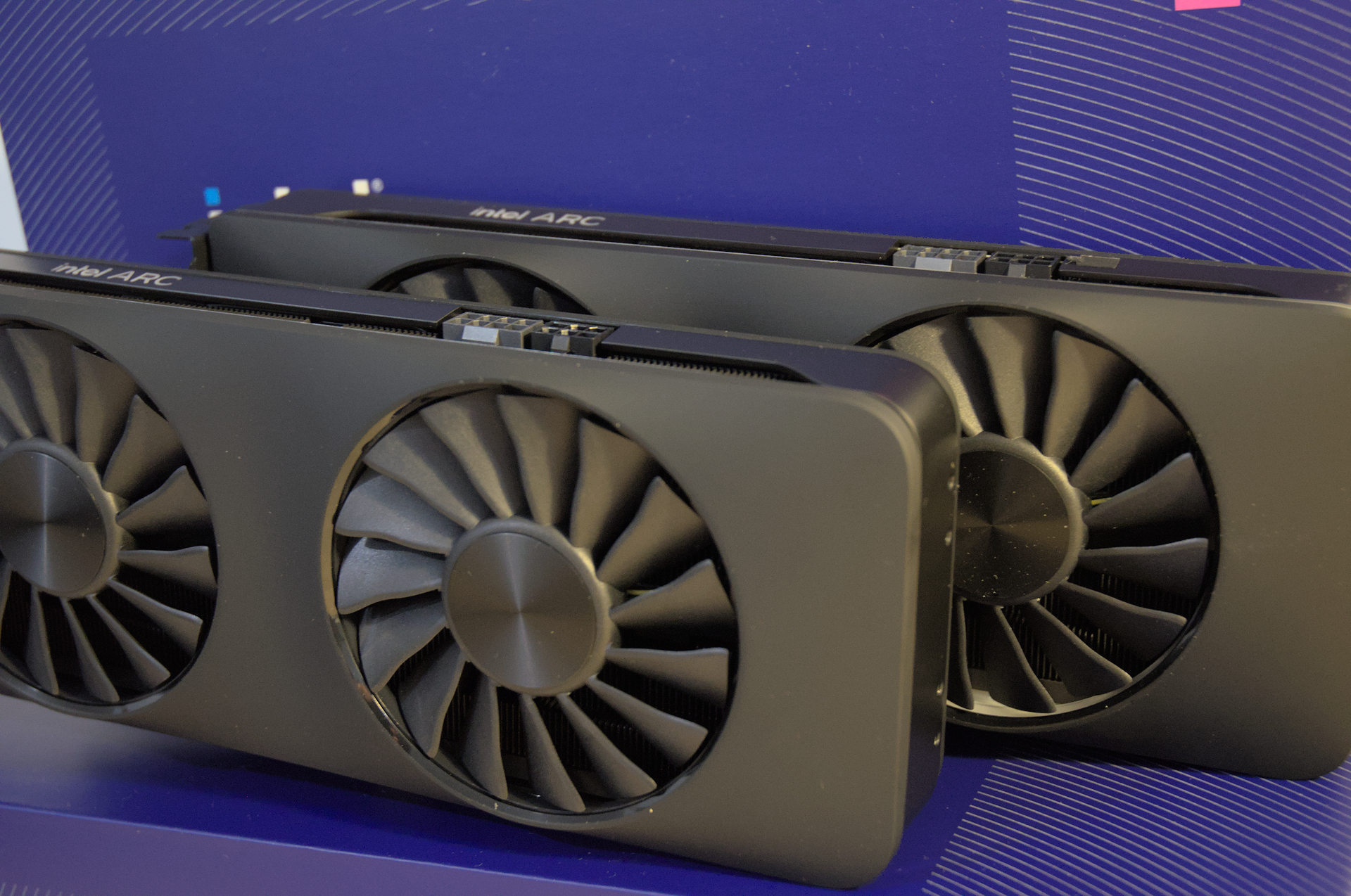 Both boxes are the same and work the same way. You lay it down flat with the Arc logo on top, and open it like a chest to reveal the card inside of it. In there we find a nicely shaped foam around the GPU with a layer in the cover to put the little Intel card that comes with it. For the A770 card, there is a small box under it in the foam with an extra accessory. It is not included with the A750 however. The foam is glued to the box and it does not move, likely to make stronger protection for the card. Overall the GPUs are safe in there and mine arrived without issues.

This is a similar packaging style we see with Nvidia’s Founders cards and it seems to be quite popular right now. I will say opening the box like a chest is much more satisfying than ripping one side and “sliding” the package out for sure. 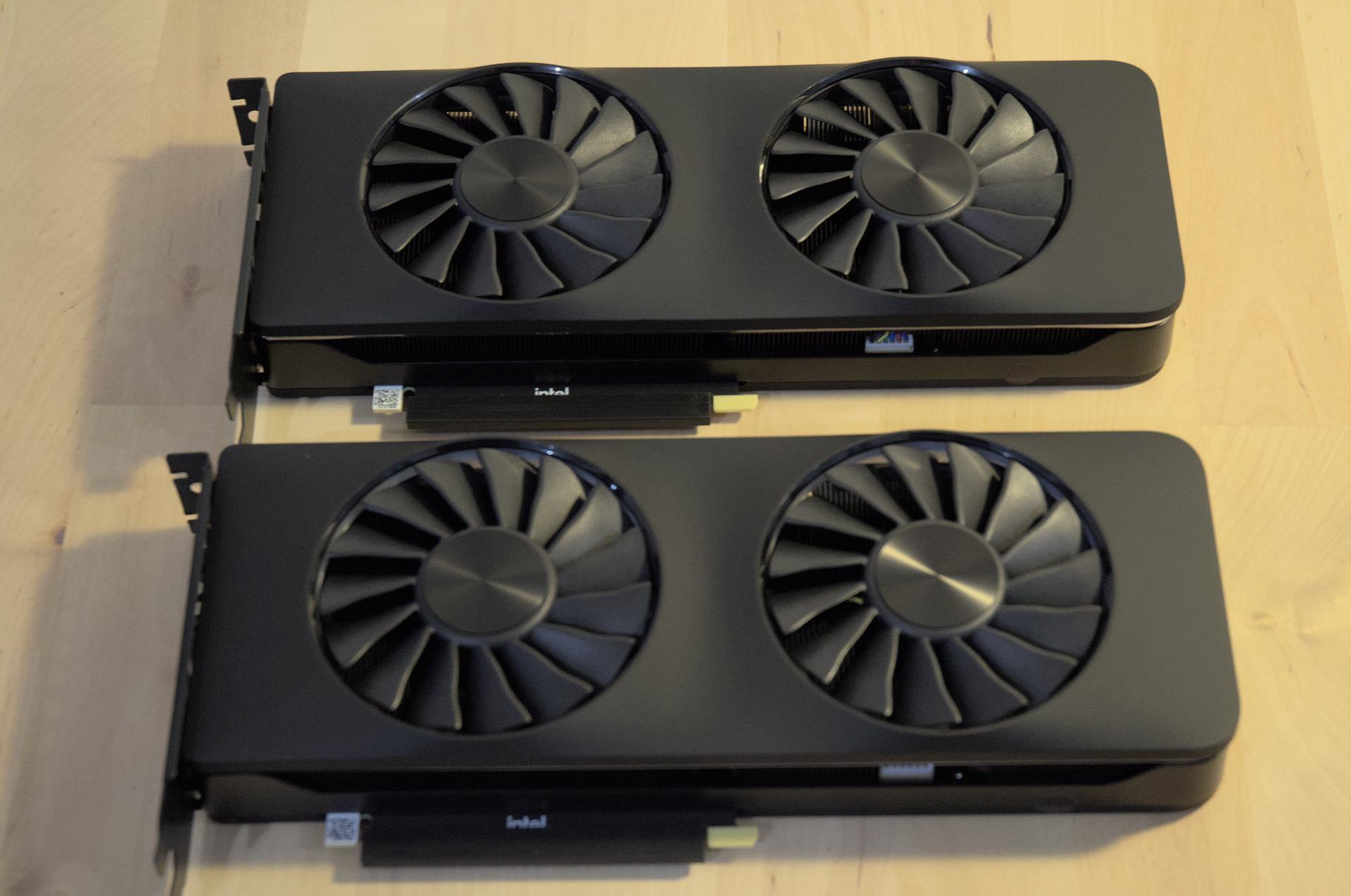 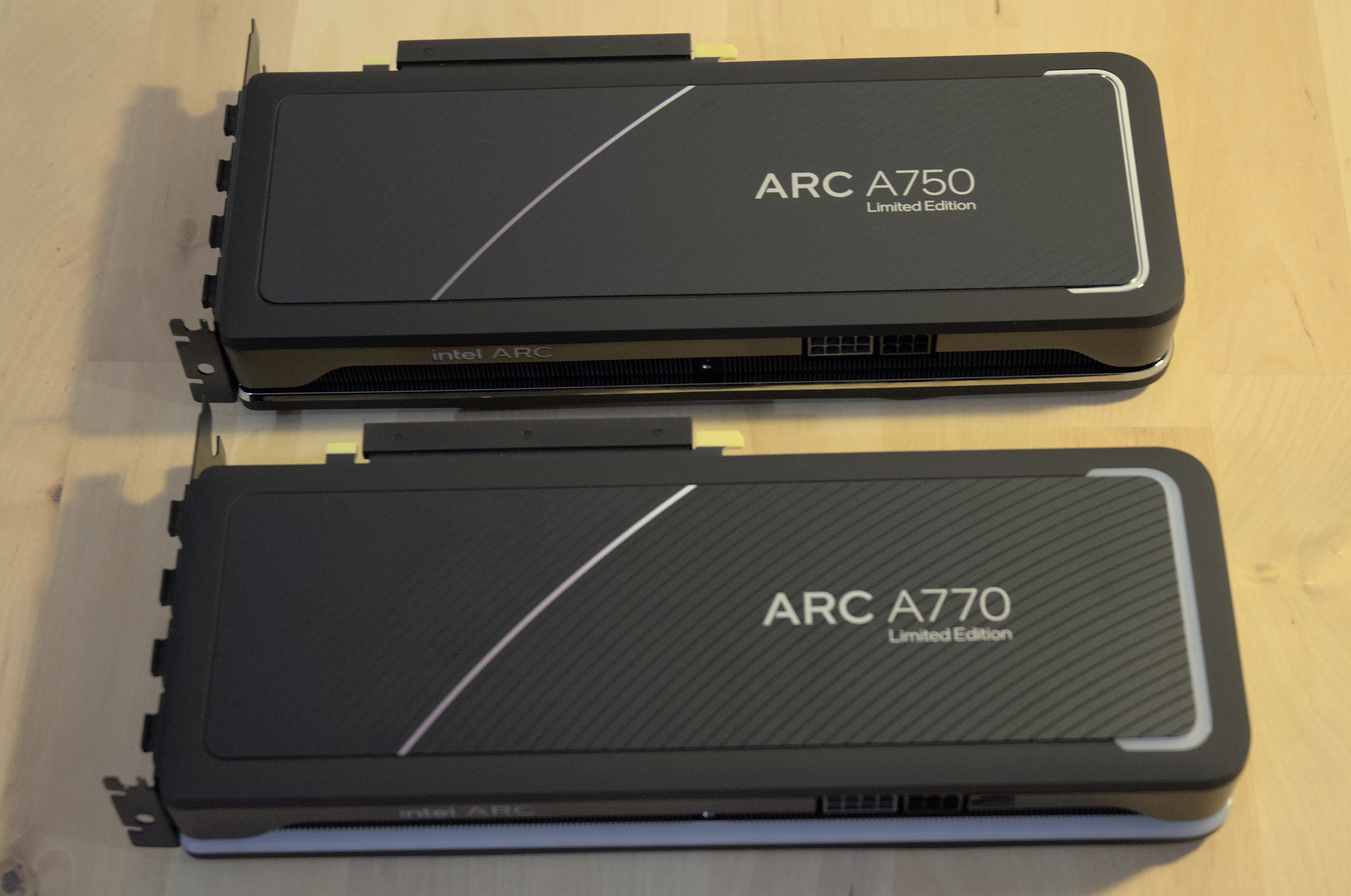 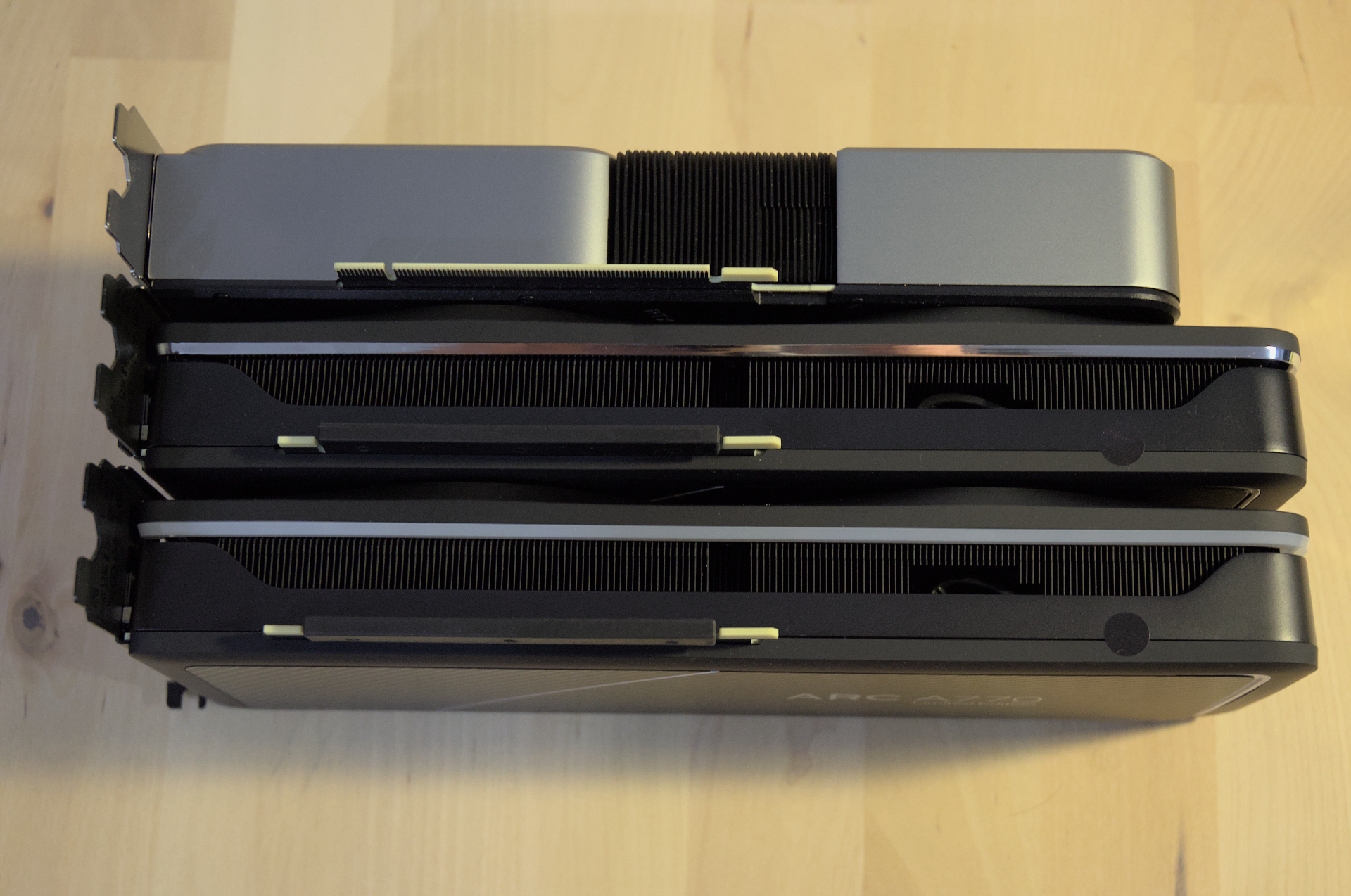 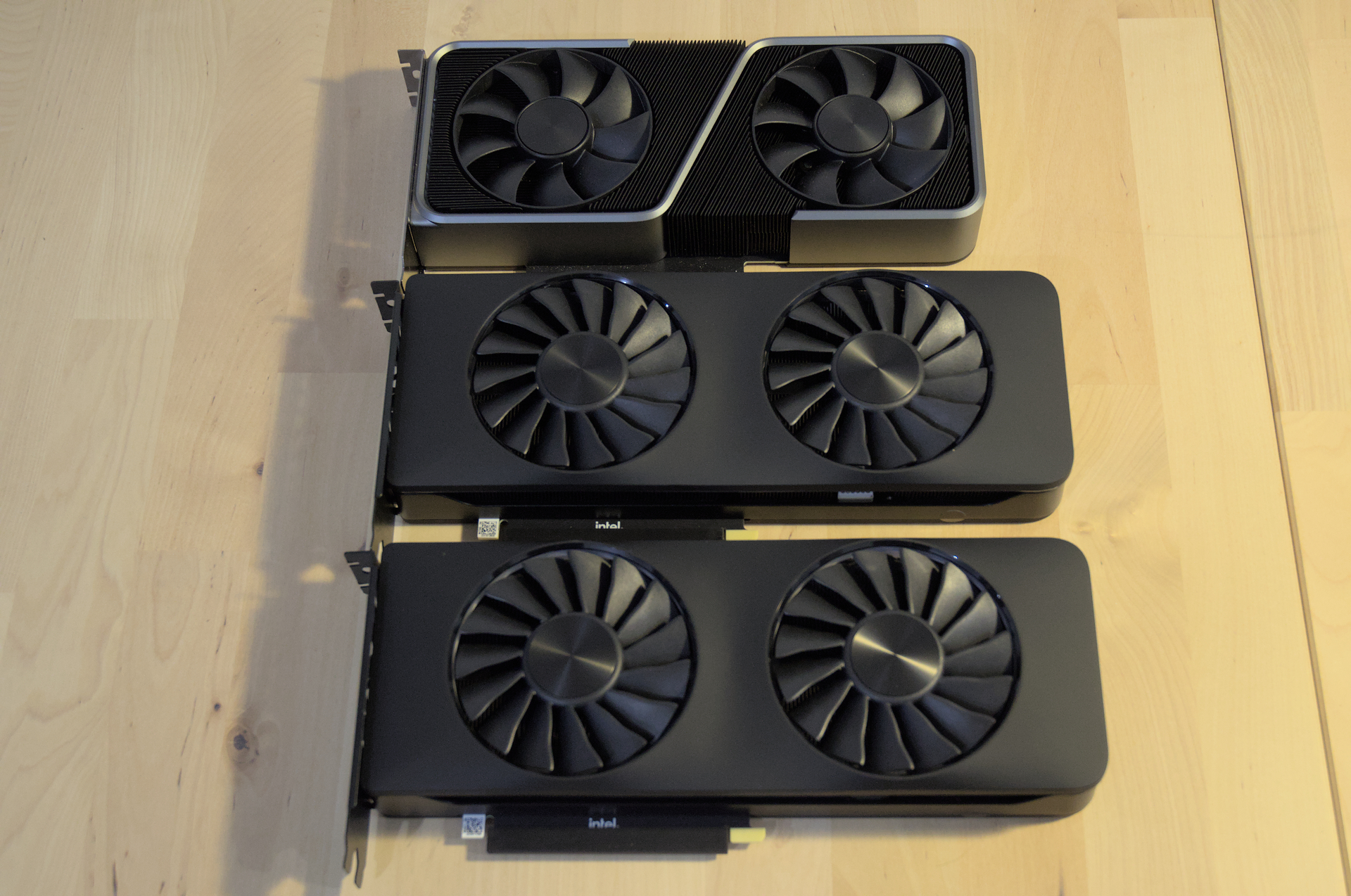 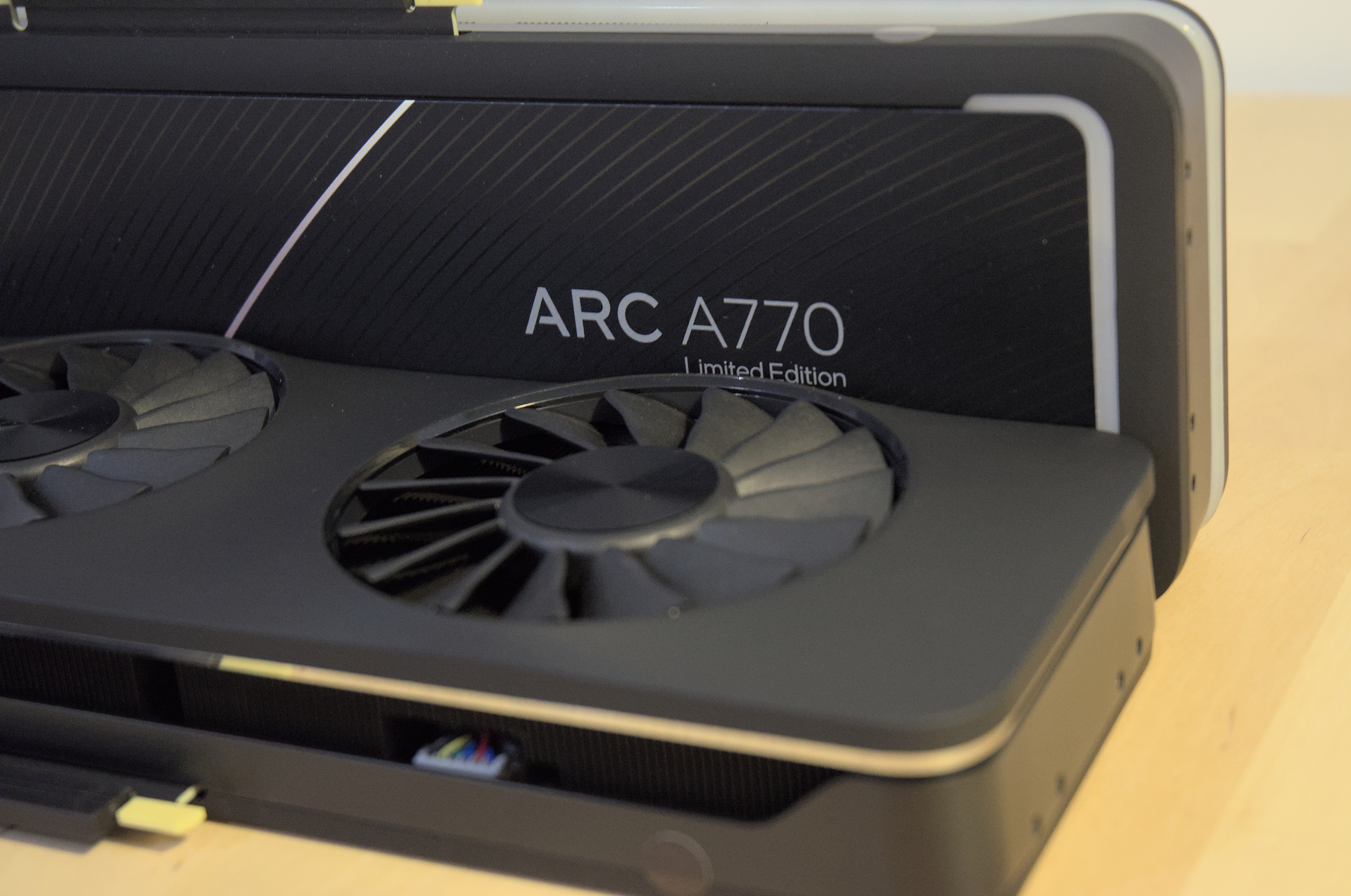 And then we get to the main topic : the cards themselves. Both cards are extremely similar and use the exact same design, with the only exception being the A750 using shiny chrome-like lines instead of the RGB lights of the A770. The cards are a dual slot design using two fans for cooling over a heatsink coated black that we can see below the shroud. The overall design is very simple and plain, which has the advantage of being a very safe design. It fits most builds and doesn’t stand out from the rest of the parts (except maybe for the A770’s RGB but that can be turned off).

It is slightly longer than my RTX 3070 Founders in comparison, but still a very reasonable size compared to some other designs with the same power draw (like most 3060 TI/3070 that are not Founder designs). The exhaust of the heatsink is not covered for the most part which is how it should be, so this design should not be running too hot. Intel uses standards 8+6 pins connectors for power, which is ample for the power draw of this card. For some reason the two connectors are different colors, which I believe is a good decision if intentional. 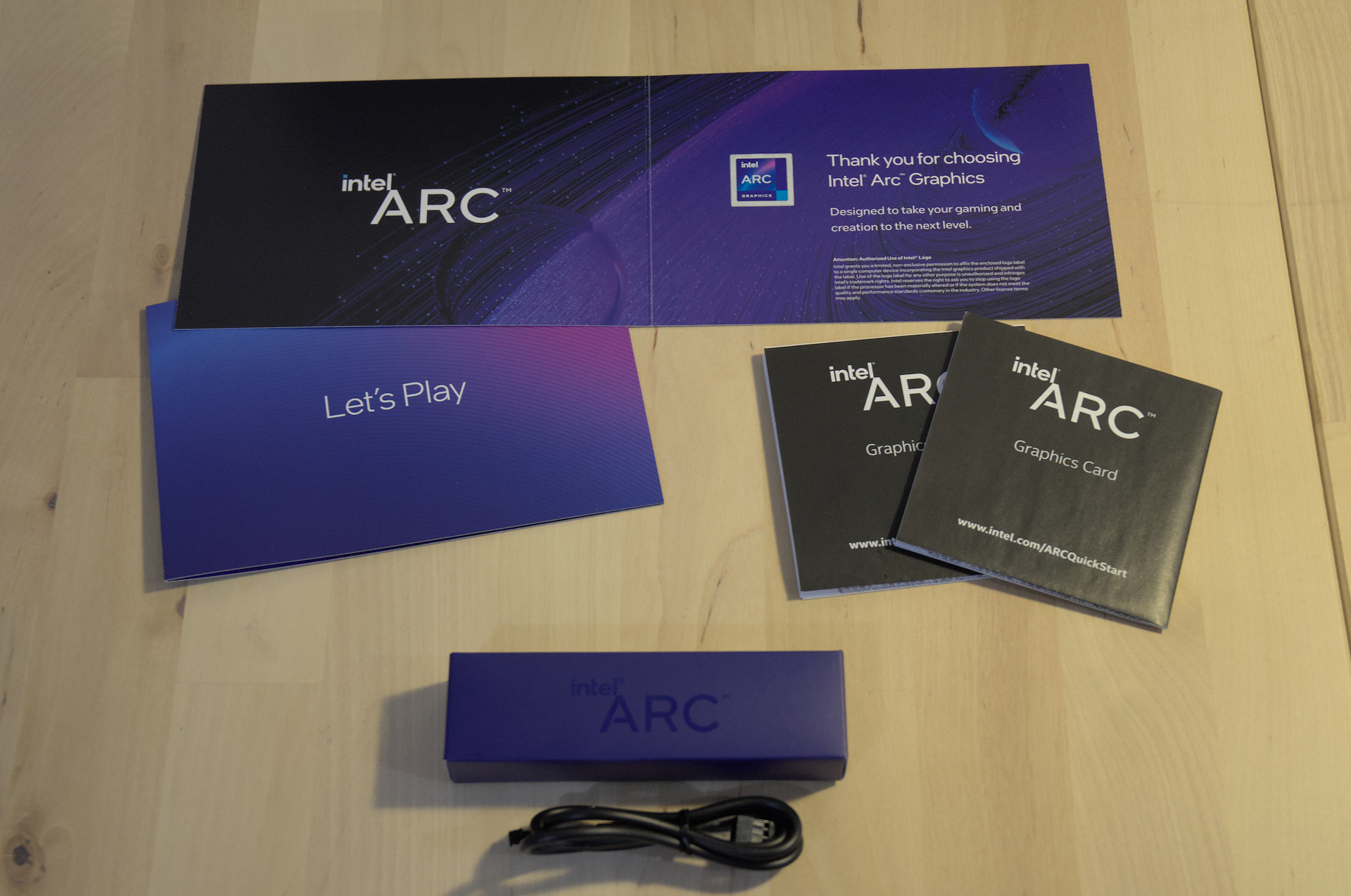 There is very little with the card itself in the box. We do have a nice “Thank you” card with an ARC sticker to put on your case if you want, and a basic quick start guide which is however very poor. Not even instructions on how to install the card. The only thing on this paper are basically instructions on how “this card must be installed by a professional”, to use proper ESD tools and how the card can get hot so you should “wait approximately 5 minutes after turning off the system before handling the card” in multiple languages. At the very least Intel states the card comes with a 3 year warranty in here too, which is the only information I find useful in all of this.

We also see the tiny ARC branded accessory box that comes with the A770, which is a simple USB cable to control RGB from the motherboard’s software. This is a surprising method which I am not a fan of, as it requires an extra cable compared to other cards. Since the A750 does not have RGB, it explains why it does not include the cable too. 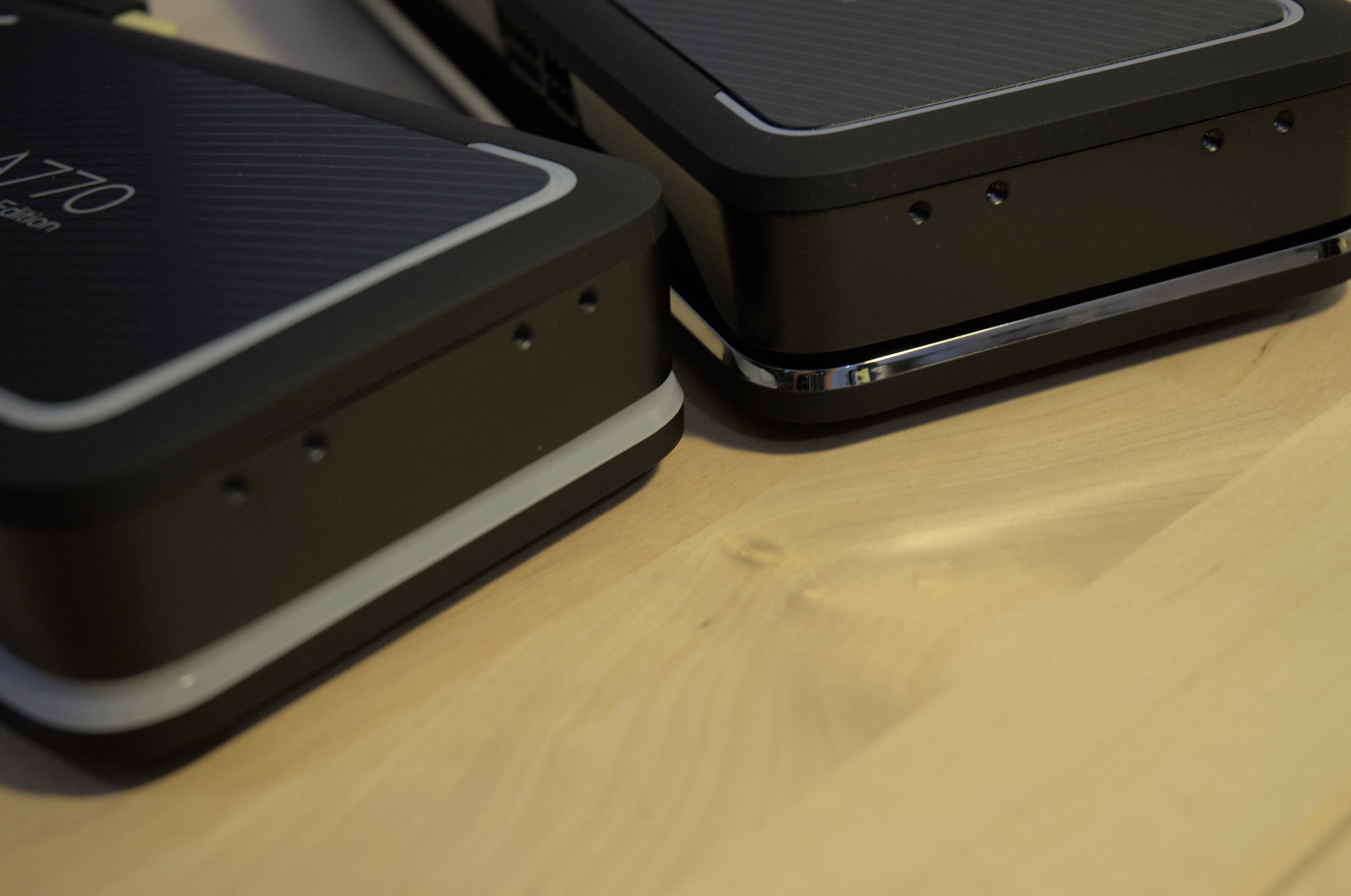 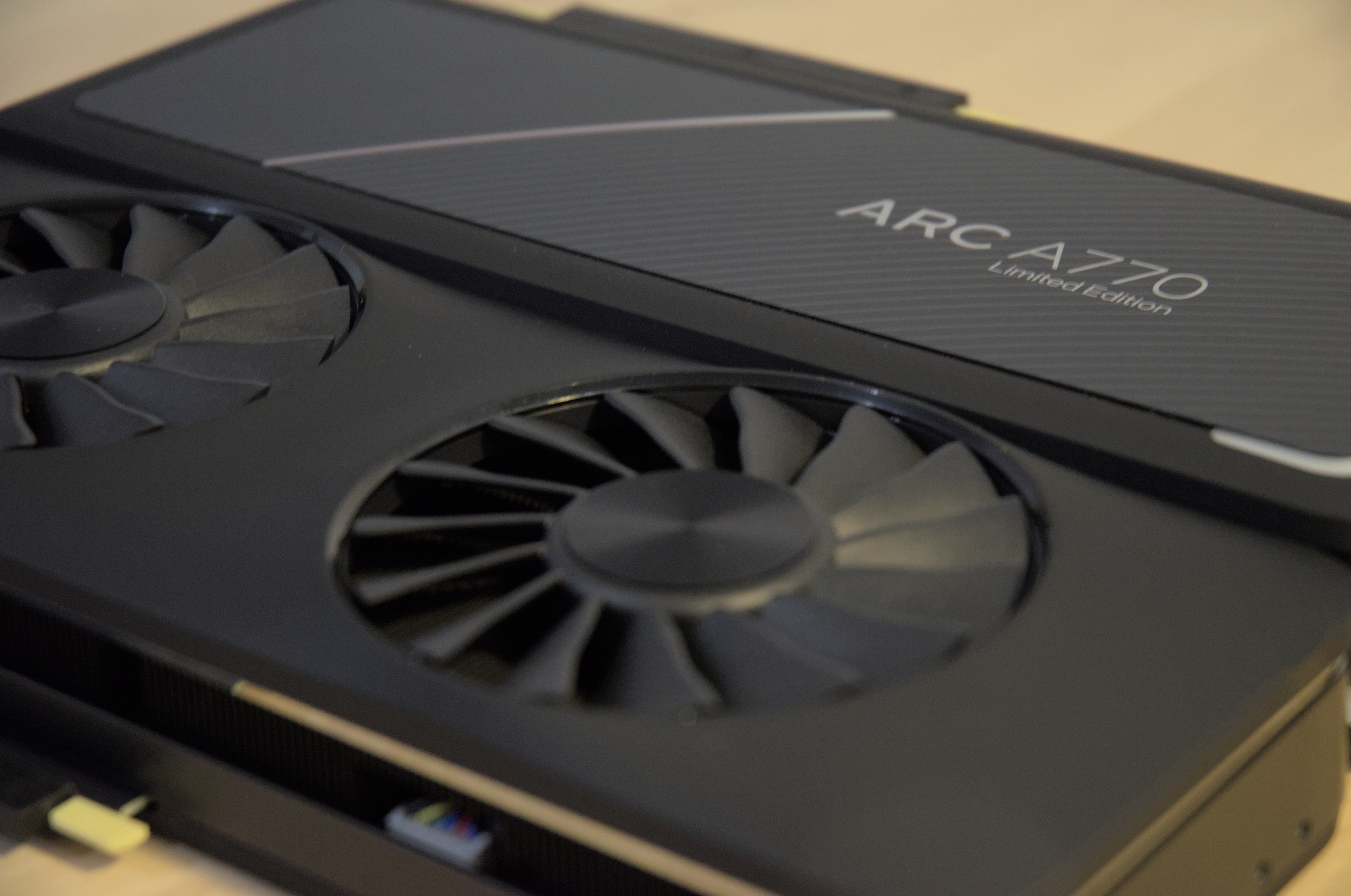 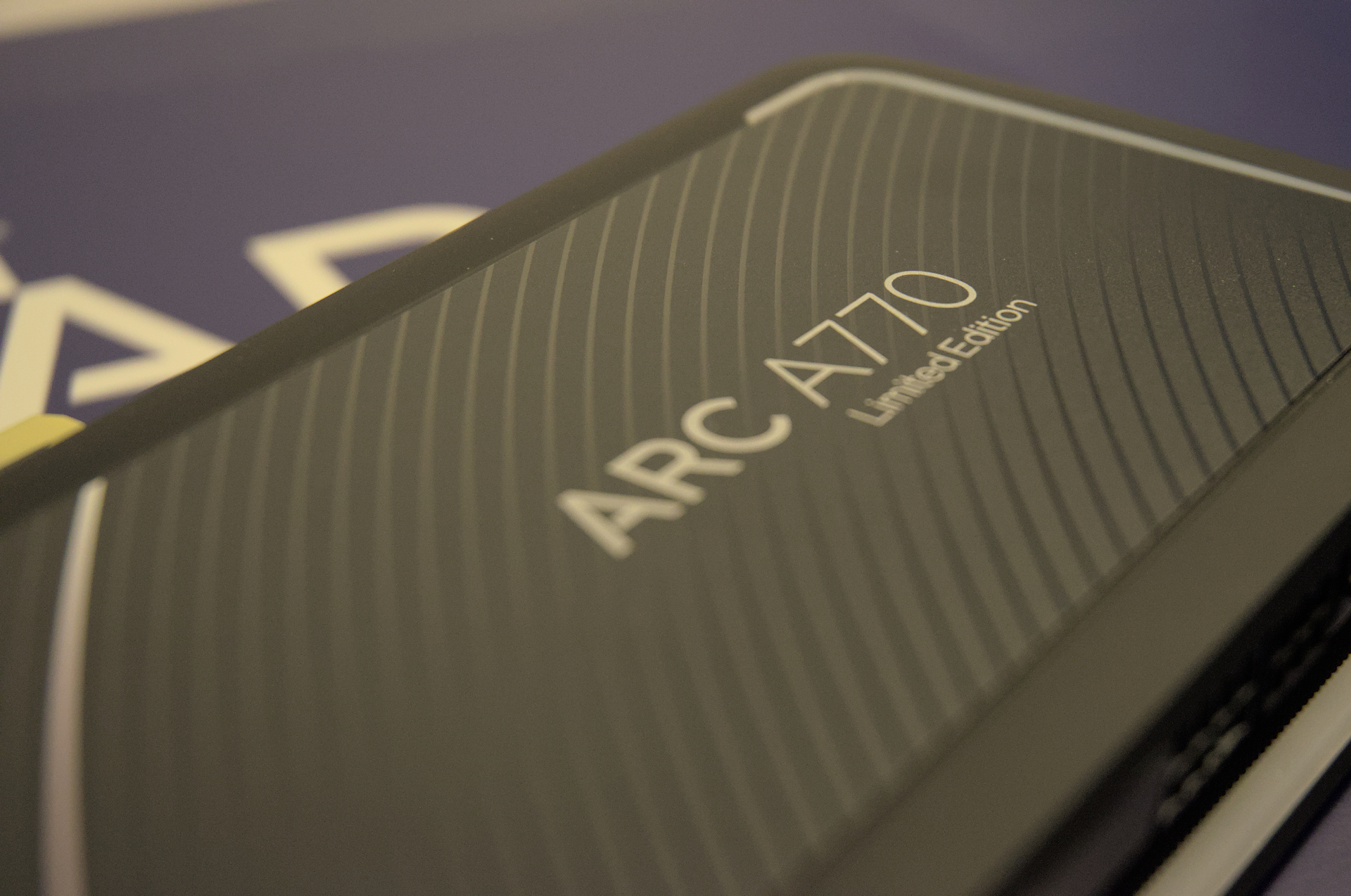 Overall i believe Intel did a good job of introducing a simple yet efficient design for their new cards. The cooler is properly sized, the esthetics are simple and do not take any risks of standing out in a bad way, and the dual fan design works much better than a blower design which was still used for reference models not se long ago. The card is not too heavy and should not have issues fitting most cases. It isn’t too power hungry either so it should fit most power supplies without struggling.

The box and protections are quite good as I received it. There should not be any issue of damage or defects with it. The use of Foam both inside and outside the box is very effective overall.

The only thing I am slightly disappointed about is the lack of accessories in the box and no manuals! I do prefer when something is included with basic instructions.

I will be reviewing these two cards very soon on our site as well, so stay tuned for all the benchmarks and teardowns.