Silverstone has introduced a new case, the ALTA G1M. It is a vertical micro-ATX case that comes in black and white. It is designed around a small footprint with a rotated layout as the IO of the motherboard and the GPU are coming out at the top. There is no tempered glass on the case, only solid and mesh panels. The case is made of plastic and steel.

Similar to the NR200 or the Ncase M1, it has a side bracket to mount a radiator. Silverstone advertises compatibility with up to 360mm AIOs. The bracket can also be used to mount 2.5′ and 3.5′ drives or simple 120mm fans. The case only fits SFX and SFX-L power supplies with a maximum length of 130mm, so bigger ATX units will not fit. 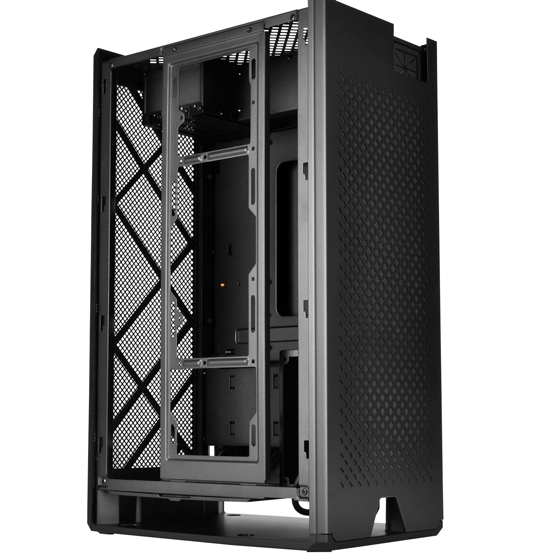 The max length for GPUs according to Silverstone is 355mm length and 165mm width. Coolers up to 159mm height will fit, so bigger coolers like the NHD15 should not be an issue in this enclosure. The case only supports 120mm fans at the side or rear. A radiator is only possible to mount on the side bracket.
Silverstone advertises only 4 drive bays for both 2.5′ and 3.5′ drives, with 2 at the rear and 2 on the side bracket for both sizes. The case comes with one 180mm Air Penetrator fan at the bottom as an intake. This is the same fan that was at the bottom of the
RV02.

The front IO features a USB type C port and 2 USB 3.0 type-A ports. There is also an audio jack combo as well as power and reset buttons. There is a dust filter at the bottom, and cable cut-outs for cable management as the IO still comes out inside the case. That means the rear IO is not directly accessible.

The price for the case is expected at approximately 170 USD. The case will first be available in Asia around October with North America and Europe releasing a few months later.

No, 12VHPWR Doesn’t Have A Low Rating