After being heavily disappointed by the Ryzen 3 4100, I am now looking at the much more promising Ryzen 7 5700X. It launched on April 4th this year, and supposedly brings much better value for gaming at 299$. So, let’s see how it fares against the 12700K from Intel.

AMD does not include a stock cooler in the box, which is disappointing as 65w is not hard to cool and its predecessor, the Ryzen 7 3700x, shipped with a Wraith Prism.

We will be comparing the Ryzen 7 5700X against multiple CPUs from both AMD and Intel. All AMD CPUs are on the AM4 socket so the same board will be used for all Ryzen CPU’s. On intel, we have benchmarks for CPUs on LGA1200 and LGA1700, so two different motherboards will be used.

The system used is Windows 10 21H2 for all platforms. A clean re-installation is done when changing socket and every driver is reinstalled. Windows is updated every time before starting the benchmarks. The RTX 3070 FE is on the stock VBios with no overclock and with Nvidia Driver 512.77 without GeForce Experience.

All power limits and boosting duration on Intel are set to the max. XMP is enabled obviously. On the MSI Z690 Tomahawk Wifi DDR4, both EPS cables are plugged in at all time.

All bios settings for the Asus Strix B550-i were by default, which means PBO is on Auto and not disabled.

Let us start by looking at the gaming performance. The data is the same as the Ryzen 3 4100 review. The same set of games are used with the same settings as well.

Shadow of the Tomb Raider

With Red Dead Redemption 2 being very heavily GPU bound, the results are all quite close to each other. Still, the 5700X achieve a good result here by basically matching the performance of the 12700K.

Just a clarification about the 1% low FPS : the way the in-game benchmark is scripted makes it run ever so slightly different each time (some character positions can change a slight bit from one run to another, same for some pistol shots , …). This as a whole made the 1% low FPS results very inconsistent overall. Even when i ran the benchmark 3 times to have an average value, i had some runs scoring as low as 20 FPS for 1% low while the other runs were more in the 60-70 FPS.

This would explain the overall inconsistent results between the results for 1% low FPS. For the record, i managed to get one run where Arthur ended up stuck behind a tree, unable to move forward and complete the benchmark. I had to exit it manually to keep working…

Still, all CPUs benchmarked here can easily deliver comically high FPS anyway, so this is not a concern.

Blender is first. And the first odd result about the 5700X appears with it. I was expecting it to lose to the 12700K considering the latter has a total of 12 cores, but not to the 5700G.

This is because of the PPT of the 5700X, which is only 76w, while the 5700G still has a full 88w PPT. Therefore the 5700X ends up with lower clocks in multi-core and thus lower performance.

While this is not really an issue, it makes the 5700X a poor choice for multi-core rendering. Especially since the 12600K is just 10$ less with 10 cores.

In Corona benchmark, we see the same story. The 5700X ends up right behind the 5700G and defeated hard by the 12700K. This confirms that you should not pick the 5700X for productivity.

The last benchmark will be on Ycruncher. Just like for the 4100, this is not really representative of real-life performance, but more of the computer power of the chip itself. It should be taken with a grain of salt for that reason.

The temperature is from HWinfo64 measuring Tdie. I measured under both Ycruncher and multiple games to try and have both realistic and extreme values.

With Ycruncher, i run the component stress-test for around 30 minutes or 4 passes total. This gives plenty of time for the CPU to reach high temperatures and is also more realistic of long renders or workloads.

On top of the Arctic Liquid Freezer 2 360mm used for all the benchmarks, i also measured with the Gelid Phantom Black, which is a dual tower cooler with two 120mm fans, and the Wraith Prism which was included with my 3700X when i bought it a while ago.

Here we will see the results for 3 games : Shadow of the Tomb Raider, Horizon Zero Dawn and Counter-Strike : Global Offensive.

Each game is tested with 3 coolers : the Arctic Liquid Freezer 2 360mm, the Gelid Phantom Black, and the AMD Wraith Prism. Each test is the in-game benchmark and temperatures are reported with HWinfo64.

The Liquid Freezer 2 360mm proved itself overkill under Ycruncher and this is still the case here. We Barely reach 60c under CS:GO at worse. Otherwise everything stays pretty cool around 50-55c.

With the Gelid Phantom Black, the temperatures stay really reasonable again. CS:GO and Horizon Zero Dawn reach a spike at 70c each, but otherwise in-game temperatures are around 60c.

Under the Wraith Prism, we still don’t reach 80c. This proves the 5700x extremely easy to cool with a cheaper air cooler in the 25-40$ range. One could go as far and say the Wraith Stealth could be adequate here. And they would not be wrong since the 5700G with an 88w PPT comes with one and the 5700X is an even lower PPT at 76w.

Regardless, cooling the chip will not be an issue. Especially since AM4 compatibility is now widespread.

Power consumption is reported by the Elmorslab PMD device, which measures power directly at the EPS 12v cable. That means the values are truly the consumption of the CPU alone from the power supply, before losses from the VRMs of the motherboard. The PMD measured 8 samples per second.

Under Ycruncher, we see the power draw is mostly in line with the 76w PPT from AMD. There are however some spikes going all the way to 103w thanks to PBO. Even if very short, those are worth noting.

This is however not a very power hungry CPU, as expected.

Finally, power consumption in game is… a mess. The values are jumping up and down constantly, spikes everywhere.

What we can take from this graph is that the way Ryzen CPUs boost can create quite high power spikes. We can see a spike reaching 130w at least, even if average power draw is more around 70-80w.

Still, The CPU remains not very power hungry. You can definitely prepare a power suppy with the idea that a 5700X draw 100w. If it is a good enough unit, it will handle the few nastier power spikes just fine.

AMD managed to get great value out of the Ryzen 7 5700X. Gaming performance is great, almost catching up the 12700K. The 299$ USD price tag makes it a much better value, especially when you consider the price of B550 boards with it.

It also remains easy to cool and to power thanks to a lower PPT, which is a nice change considering the 5800X was a pita to cool in comparison.

This makes a great upgrade from a Ryzen 2000 or 3000 without changing motherboard too. The gains over Zen 2 are quite nice. Just be aware of bios updates.

There are however some downsides.

First as we saw, the CPU does not perform well in multi-core. This makes it a bad choice for anyone interested in doing rendering or anything that needs that multi-threaded performance (which is ironic considering that has been a strong point of Ryzen since the start).

Secondly, buying it new is less advisable considering the AM5 socket is getting closer and closer. It is possible (and likely) that current AM4 boards will not be compatible with not support next-gen Ryzen CPUs.

Overall, even if late to the party, AMD managed to make good competition to the 12700K while waiting for next-gen products. 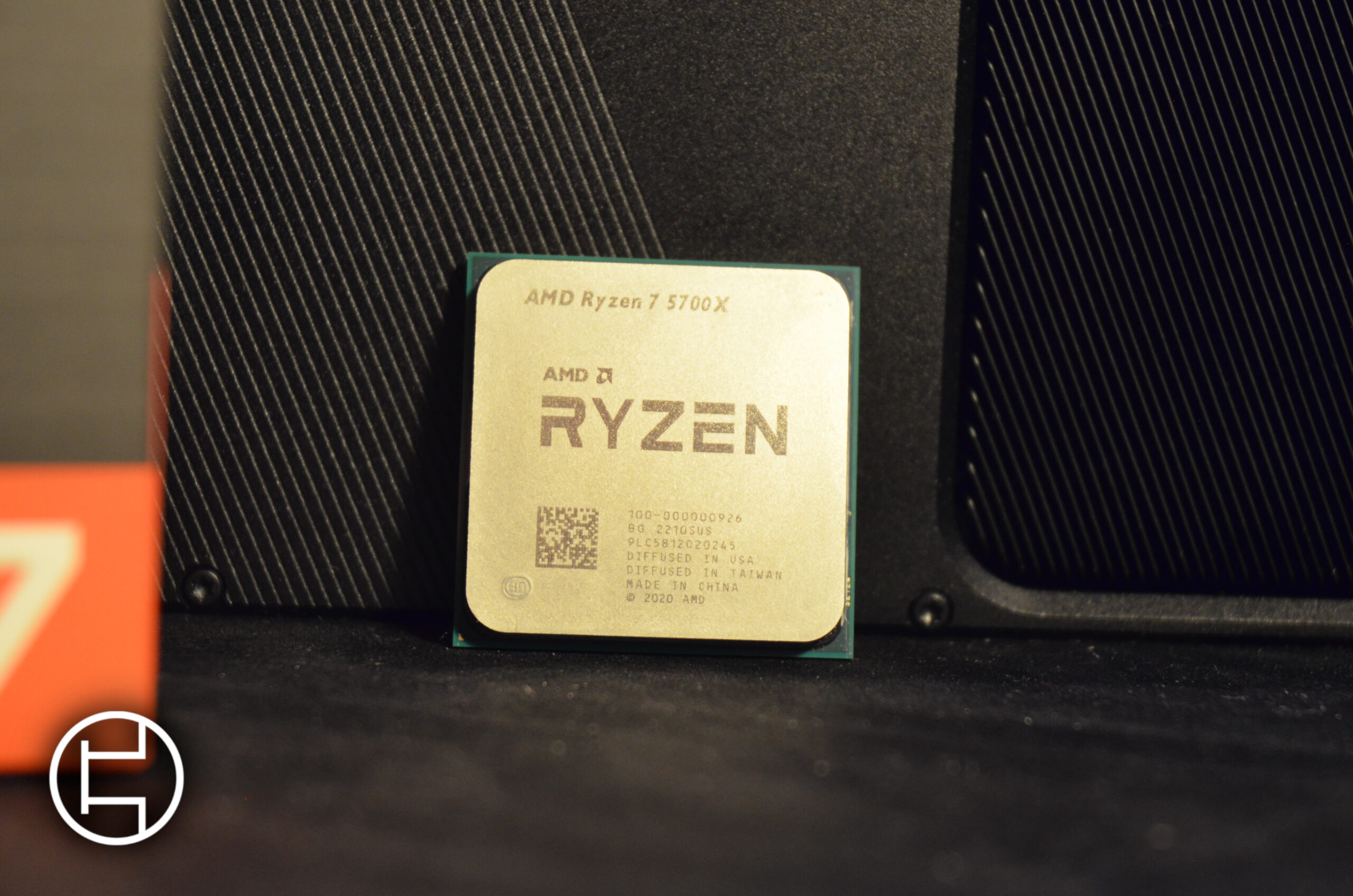